Maintaining an action RPG, that too one with a large property like Marvel and constantly online, isn’t easy. Gazillion’s Marvel Heroes busted on to the free to play scene years ago and has made quite a mark. At the very least it’s managed to annoy and delight its user base with its changes. With Marvel Heroes Omega currently available on Xbox One and PS4, Gazillion is now faced with developing for two separate audiences as opposed to one.

GamingBolt spoke to lead designer Ben “TheArtofRawr” Gilbert about the same and also asked about balance changes, the current content that console players can expect in Marvel Heroes Omega and much more. 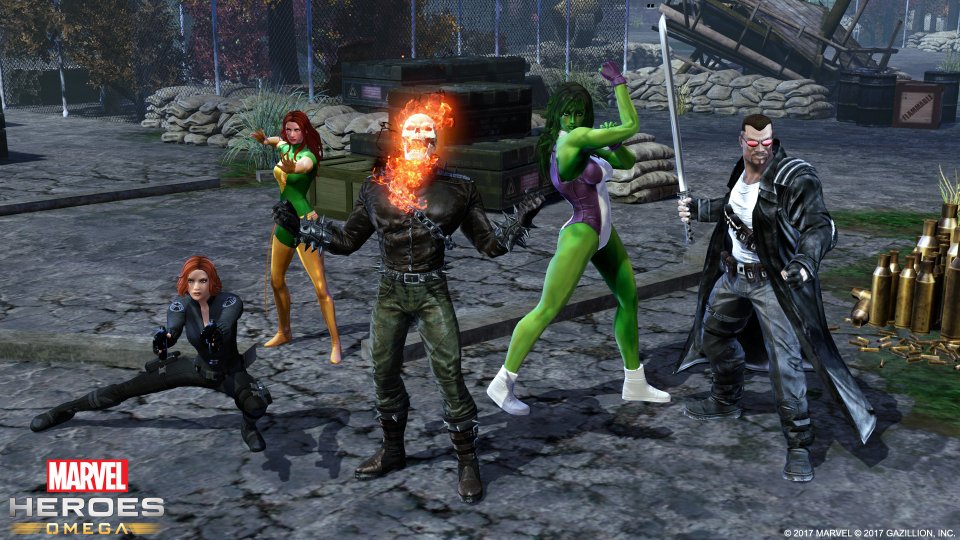 "For those who want to truly maximize any single hero’s true potential, there are a variety of Trials for players who want to unlock higher tiers of difficulty and access to the most powerful gear for their Hero."

How has the journey been for the studio thus far with Marvel Heroes, especially as both the comics and movies keep changing the status quo?

The journey has been a rich one. We’re all huge fans of the Marvel Universe. So it’s a great honor and privilege to be able to work with the good folks at Marvel – and to be able to continue expanding and bringing new content to Marvel Heroes Omega alongside the Marvel Universe at large. We recently introduced new content inspired by Spider-Man: Homecoming to PC, including a new event that finds players facing off against the Sinister Six. It culminates with a great rooftop showdown with Vulture – and we can’t wait for console players to be able to check it out soon on PlayStation 4 and Xbox One in July.

What is the difference between regular Marvel Heroes and Omega, such that it’s being referred to as Omega on consoles rather than just Marvel Heroes?

The main difference between PC and console is content. There are a lot more modes and playable Heroes currently on PC that we’re planning to bring over to consoles. The end goal is more parity across all platforms, and to that end you can expect a rebranding of the PC version from Marvel Heroes 2016 to Marvel Heroes Omega soon. It’s very important to us that we continue developing new content for all platforms, and more parity helps us achieve that. Our recently released Spider-Man: Homecoming launching first for PC and coming soon to consoles is a good example of that.

New players will likely find themselves focused on building up their very first Hero as they make their way through our nine-chapter story campaign. It covers the rich and detailed world of the Marvel Universe, spanning from the gritty streets of Hell’s Kitchen to the mystical realm of Asgard – and pits players against some of the most infamous villains, including Doctor Doom and Loki. But finishing the story campaign and leveling up your first hero is just the beginning.

For those who want to truly maximize any single hero’s true potential, there are a variety of Trials for players who want to unlock higher tiers of difficulty and access to the most powerful gear for their Hero. There’s also our new Infinity System, which awards players with all kinds of statistical bonuses for continued play after hitting the level-cap of 60. Operations and Danger Room scenarios are also great for quick instanced runs that end with the chance for more valuable gear to optimize heroes. And that doesn’t even cover some of the end-game raid content we still plan to bring over from the PC version. 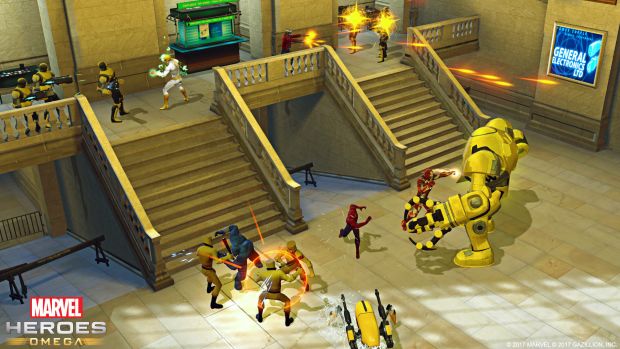 "Major iterations to systems can be quite polarizing. There was a lot of debate internally, but at the end of the day, we truly feel that those changes resulted in a better experience."

How do you feel the impact of Marvel Heroes has been especially with competitors like Path of Exile and the still-popular Diablo 3?

Path of Exile and Diablo III are fantastic ARPGs – and we think both titles have brought a lot of great ideas to the genre. If I had to point to one thing Marvel Heroes Omega brings to the table, I’d just point to our title. We have a fantastic roster of playable heroes from the Marvel Universe, which will only continue to grow over time. If you have any favorite Hero or team from the Marvel Universe, there’s a strong chance you’ll find them in our game. We’ve got core members from the Avengers, Defenders, Guardians of the Galaxy, Marvel Knights, the X-Men, and many more. We even have playable heroes you might not expect to see, such as Angela or Squirrel Girl. And that’s not even counting some of the new characters we plan to bring to the game over time.

Tuning the end-game in online action RPGs is always tough. What is the current end game in Marvel Heroes Omega, for both solo and group players?

For solo players, completing the Cosmic Trial to unlock our highest difficulty setting and most valuable tier of loot drops is a must for those who want to perfect any Hero. That opens the door to challenging runs with better loot in our various Operations and Danger Room scenarios. For group players, couch co-op is a great way to enjoy playing Marvel Heroes Omega with a friend for a more casual beat ‘em up experience.

But we also have Patrols, public areas that are constantly under siege by super villains and other threats. It’s great fun to jump into the fray with tons of other players online to take on various villains to foil their schemes. Like our other modes, Patrols also have a range of difficulty settings, which can be unlocked by completing our various Trials. We’re also constantly adding new, ever-harder things to challenge Heroes at the highest power echelons.

Long-time players have had some criticism for the changes to the movement, Infinity System and just the game being dumbed down in general. What are your thoughts on this?

Major iterations to systems can be quite polarizing. There was a lot of debate internally, but at the end of the day, we truly feel that those changes resulted in a better experience. We also took great effort to carefully explain our rationale for these changes to our players in detailed developer blogs on our PC forums (our only platform at the time).

Even with these changes, Marvel Heroes Omega is still an incredibly fast-paced ARPG in terms of movement and navigation – and the relative elegance and clarity of the Infinity System unlocks the depth of an infinite progression system for more players, as compared to the highly complex Omega System. These changes were about bringing more choices to both moment-to-moment and strategic choice gameplay sections of the game, and we feel they achieve it nicely.

Generally,  there will always be those who disagree with any given design decision, however we’re always committed and eager to hear out any and all feedback players are willing enough to share. At the end of the day, we all share the same goal: to make this game the best it possibly can be. 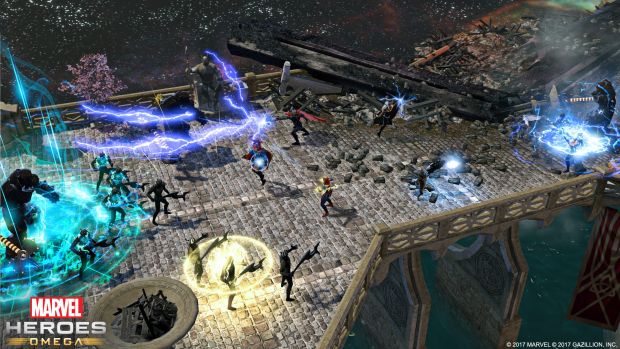 "We are excited to introduce even more playable heroes to Marvel Heroes Omega on consoles. The first new hero players can look forward to will be Black Cat!"

What are the pros and cons of working on consoles versus PC?

Speaking purely from the design side (engineering side being a whole other discussion), there are some trade-offs. Both platforms fundamentally share a love of the content, but have some subtle and not-so-subtle details to design around. The console market tends to demand ruthless efficiency, and very clear, succinct communication of mechanics. PC audiences tend to be more forgiving of those screen-smothering webs of tiny icons and walls of tooltip text.

Also, a controller trades off fine-tuned cursor control and typing for viscerality and approachability. Designing abilities to function in both control configurations was an interesting hurdle, but I think we got it done nicely. This is just to name a few of the challenges we tackled in adapting a PC title to a consoles, not to mention while taking that opportunity to iterate on some of our core design patterns (I’m looking at you, Power Points system).

What future heroes can we look forward to, both in the near future and long-term?

I can’t speak too much in detail for long term additions, but we are excited to introduce even more playable heroes to Marvel Heroes Omega on consoles. The first new hero players can look forward to will be Black Cat! For PC players, the next new playable character won’t be a Hero at all. Get ready for Carnage!

What kind of future updates can we expect in terms of content? Will updates release at the same time on consoles as PC?

We plan to follow a release schedule similar to what players are familiar with for other free-to-play games on multiple platforms with new content launching first on PC followed by PlayStation 4 and Xbox One.

I really appreciate you taking the time to chat with us about our game. If you are a Marvel fan or love ARPGs, I truly believe you’d be doing yourself a disservice by passing on Marvel Heroes Omega. It’s free-to-play and our recent launch is just the first step. Marvel Heroes Omega will continue to improve, grow, and expand along with developments in the Marvel Universe.