The T.R.A.C.K. Suit, another secret suit, and the Gravity Well gadget.

Pre-orders for PS5 are live now (even though the whole thing has been a bit of a dumpster fire), and alongside that, so, too, are pre-orders for the console’s launch titles. One of those is Marvel’s Spider-Man: Miles Morales, and if you’re wondering what the pre-order bonuses for the game are, those have now been revealed.

An image was recently uploaded to the game’s page on the official PlayStation site, and though it has since been taken down, a user on Reddit managed to snag it (you can take a look at it below). That and descriptions of the bonuses on the game’s Target listing detail what pre-order bonuses you can expect.

Those who pre-order the game will get early access to two suits and a gadget (which will presumably also be unlockable through gameplay for everyone else). There’s the T.R.A.C.K. Suit (or Time Response Activated Circuit Kinetic), which comes with the Untrackable Suit Mod, which will presumably have something to do with Miles’ invisibility powers.

The second suit is a mystery for now, and Sony will likely reveal the details early on. Meanwhile, the pre-order gadget is the Gravity Well, which can be used to “pull enemies together to knock them down and disarm them.”

Marvel’s Spider-Man: Miles Morales will launch for the PS5 and PS4 on November 12. The game’s PS5 file size was recently revealed- read more on that through here. 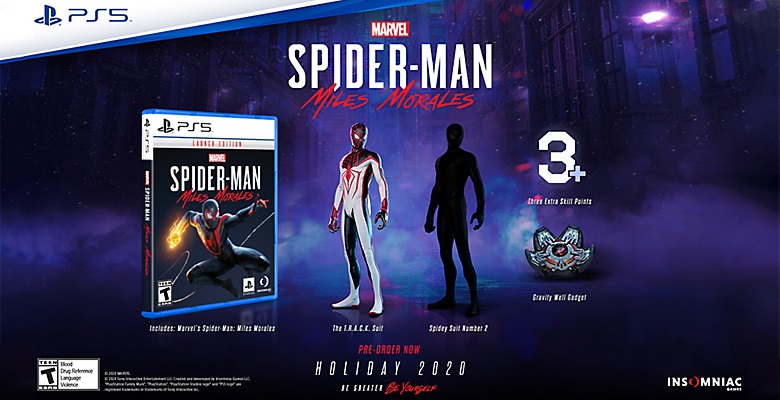