One of the most anticipated RPG’s this gen is non other than Mass Effect 2, the game is only confirmed for the Xbox 360 and the PC right now, though there were a couple of rumors a while ago stating the possibility of the game coming to the Playstation 3, or in fact just saying it will, pretty much all of them we’re denied by BioWare and the hope was dead since then.

This time it’s a more reliable source i should say, according to one of UK’s and Australia’s biggest video game retailers, they are listing Mass Effect 2 on the PS3, a release date – 10/01/2010, and even an Item Code – MASSEFPS3.

Well, there isn’t any reply from neither EA or Bioware, but we will keep you guys updated on this rumor.

A Russian Retailer is now listing the game on PS3 aswell. 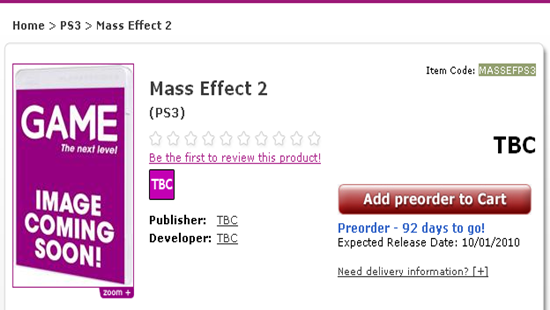