The ad gets around the advertisement exclusivity deal between Sony and Star Wars: Battlefront. 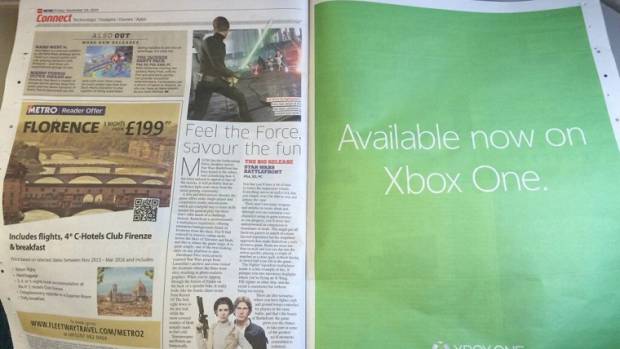 It isn’t exactly a surprise that Star Wars: Battlefront is an incredibly popular game. That’s one of the reasons Sony, EA and DICE have struck a deal that forces any advertisement for the game to officially advertise the PS4 version. In the UK at least, Microsoft has found a rather creative way to get around this particular deal. In the Metro newspaper, a Neogaf user has spotted how Microsoft is making it clear the game is also on the Xbox One console.

In the paper, right next to a review of the game, there is a full page ad on the next page which simply says “available now on the Xbox One.” This makes it appear as though the review itself is an advertisement that is tied into the Microsoft Xbox One. This kind of advertisement allows Microsoft to get the word out there, without breaking any kind of exclusivity deal the game has with Sony. The company has made this kind of move before.

The company used this kind of “trickery” last year when it came to advertising Destiny, as that game too has a deal with Sony. In that case, Microsoft was even more imaginative but advertising the game as though it was a fragrance. This particular move seems even smarter, as the review says the game is available for the Xbox One, PC and PS4, it says it in small print people have to look for, while the full page ad hints people will only be able to get Star Wars: Battlefront on the Xbox One.