The upcoming flight sim is shaping up to take what might just be the biggest leap of all time in the simulation genre.

When you think of big upcoming games for 2020, odds are, you think of The Last of Us Part 2, Ghost of Tsushima, Halo Infinite, and the like- and you wouldn’t be wrong to do so, as those studios are surely working on some outstanding experiences. That being said, if you only play those games next year, you’ll be missing out on a massive, planet-sized game from Microsoft. Yes, Microsoft Flight Simulator is coming and it’s shaping up to take what might just be the biggest leap of all time in the simulation genre with the goal of giving the player a more or less complete representation of the entire planet in one explorable map. If you’re scratching your head wondering how that’s even remotely possible at this point, you’re not alone. But Microsoft and their nearly boundless accumulation of resources are absolutely going for it, and not in the same way that the crew did with just shrinking America down to its most recognizable landscapes, but here, the plan is to get a real 1-to-1 duplicate of our planet, down to the centimeter level.

Some may have considered Microsoft’s ten-year hiatus from the simulation community to be a permanent departure, and it certainly did seem that way for a while, but last E3, among the slew of fresh announcements from Microsoft was the announcement of this massive, revolutionary undertaking in the form of a piece of software. Microsoft won’t be doing this alone in-house though. Asobo Studio, the developer behind The Crew 2’s massive landscapes and the excellent A Plague Tale: Innocence, will be helping piece the experience together, and it won’t be their first time teaming up with the studio. Aside from those previously mentioned games, Asobo worked on a handful of Kinect and Hololens titles with Microsoft, so the synergy between them should make them a formidable team. Given the sheer amount of skill and resources behind them, this could potentially be the biggest game of the year, if not of the entire next generation for several key reasons.

Most significantly of those reasons is the philosophy behind its development. Microsoft has grown quite a bit in the last decade, and not just in size, but also in terms of its scope and reach. Microsoft has greatly expanded its portfolio with the amount of new industries that they’ve expanded into. One of the more relevant ones to this discussion, is Bing. To anybody who has ever searched for anything, Bing is probably thought of as a pretty clear and distant second place to Google, at least in terms of its user base, but nonetheless, Bing has quietly been gathering digital heaps of mapping information for years, similar to what Google has been doing as well. As such, Bing has amassed well over a whopping 2 petabytes of global map data. Petabytes, as some may already know, are the next commonly-referenced data counting increment above terabytes, and the one below exabytes, which is an amount of data we’ll hopefully never have to talk about in any context whatsoever.

With this staggering amount of geographical and topographical data at Microsoft’s disposal through Bing, they, with the help of Asobo, plan to utilize it to formulate the 2020 flight simulator. Piecing it all together will be a herculean task for sure, but knowing that the data for those texture maps already exists in another form under the Microsoft umbrella does suddenly make a planet-sized game suddenly seem within the realm of possibility. But it goes further than just knowing what certain land masses look like and where bodies of water are. All this data also includes average weather patterns, building locations, as well as traffic data. All of this, if leveraged correctly, could easily form an experience that is unfathomably greater than the sum of these parts, though. 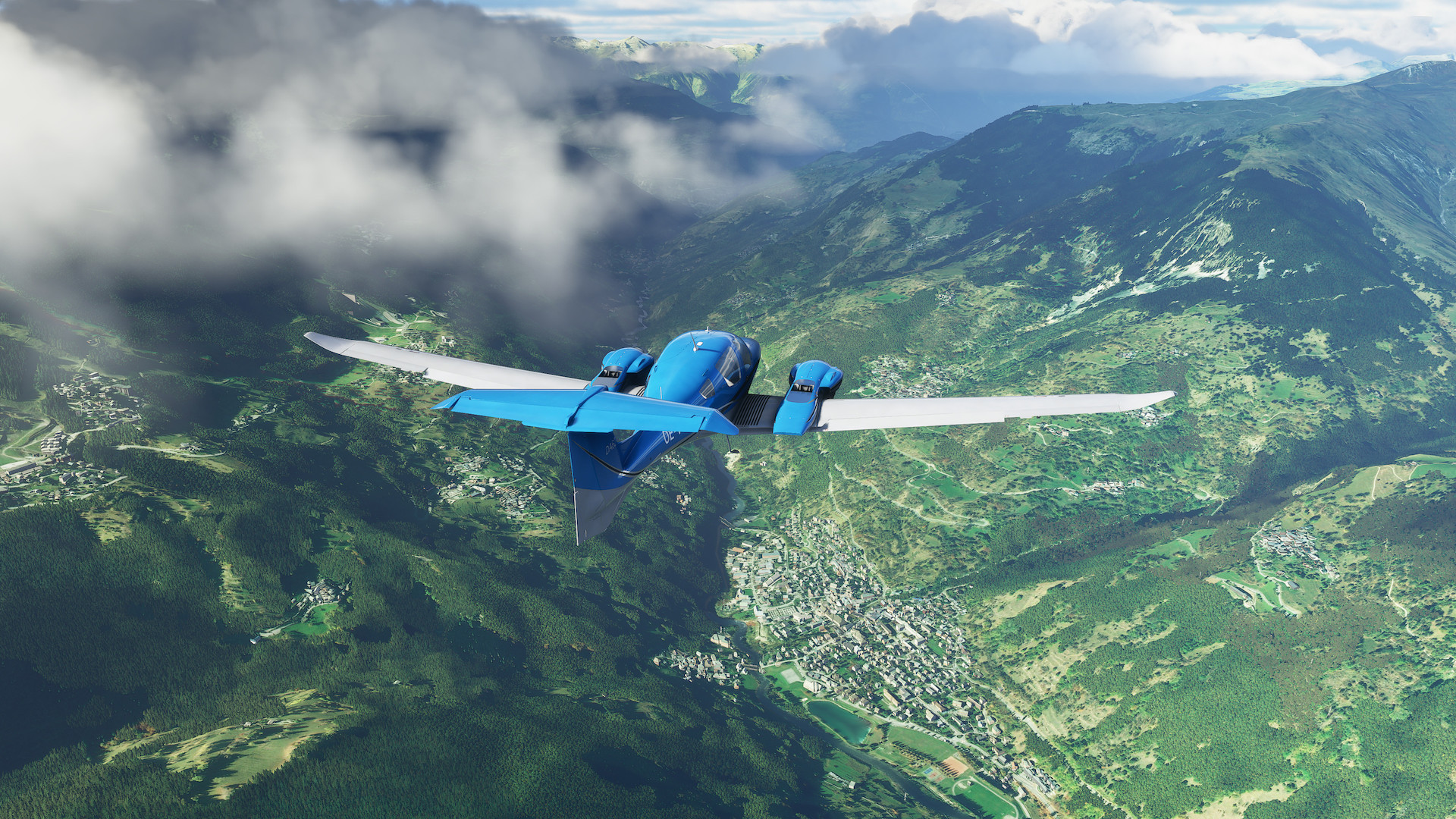 Having access to all of this weather data could lead to a highly detailed and extremely accurate weather system that could affect the wind, and as you will be in the air, affect your experience. They could also make these events tied to real-time information from Microsoft, meaning if it’s really raining somewhere in Scotland, and you happen to be flying over there in the game, you’ll have to deal with it. All of this data being housed in Microsoft’s online cloud also helps, as it would be readily available to the game servers, and thus to the players, with a reasonable internet connection. This was demonstrated as a concept at E3 last year, but by now, is likely already doable through the game in its current state.

One massive problem that seems to present itself is the obvious lack of space on modern consoles. We can barely get Red Dead Redemption 2 to fit on our hard drives today, so how in the world are we supposed to fit the world? Well, the quick answer is you won’t have to. Since all of this data is already online being constantly updated and disseminated through Microsoft, why not just keep it that way? According to the information that’s currently available, it appears that the bulk of the game, being the in-game assets from map data and the massive algorithms that fill in the blanks, will all use the game’s engine to stream the data in combination with some locally stored data, making it’s available real-time world a massive experience while keeping the size of its footprint on your hard drive within reasonable levels. On top of that, the game will determine based on your internet speed how much of the world’s detail to show you at any given time, making inconsistent download speeds across the world much less of an issue in theory, which is fairly revolutionary in and of itself. But they aren’t stopping there. According to what Microsoft has already revealed, they are also working on an offline version that aims to meet gamer’s standards with a reasonable amount of detail and accuracy.

While the world of the simulator is certainly looking to be nothing short of revolutionary, the game mechanics themselves also seem to be getting an equal amount of attention. Different winds coming together to create turbulence for your plane, a new level of depth with friction and aerodynamics, as well as the variety of planes will all be important gameplay factors. This is an area, about which, we still have much more to learn though. Microsoft has kept much of this information close to the vest, but with accurate physics, sounds, and visual elements accompanying all of the different plane models as well as how all of these things will change depending on the conditions in which you fly at any given moment, it’s clear that Microsoft and Asobo are just as serious about getting the flying right as they are the virtual world.

Microsoft Flight Simulator is certainly looking like an interesting experiment both for flight simulation video games and, if all goes according to plan, could serve as a new benchmark for what we are able to pull off when we see combined all of the progress we’ve made with streaming, global mapping data, real-time weather measuring technologies, and advanced flying simulation mechanics. Microsoft certainly does seem to have all the ingredients they need to pull of something pretty special here, so even if flight sims aren’t your thing, if the state of digital entertainment is at all interesting to you, there are few things that deserve your attention more than the development of this project.