Microsoft Flight Simulator is an experience like none other, if you can somehow ignore the performance issues.

There is something alluring about Microsoft Flight Simulator which goes beyond what your usual open world games offer. Perhaps, it’s the sense of exploration or it’s the thrill of flying thousands of miles whilst ensuring a safe flight or it’s the mind-blowing technology that is used to render the entire world. Microsoft Flight Simulator, at its core is an out and out simulation game with everything from fine tuning your aircraft’s take off to making adjustments in-flight during a sudden turbulence. If you ever dreamt of piloting your own aircraft from almost every well-known location you can think of to your favorite destination, Microsoft Flight Simulator will most likely have your back.

So, how good is the simulation in the game? Well, Microsoft Flight Simulator has that covered to the absolute T. The game provides newcomers with a comprehensive tutorial which covers everything from controlling the throttle, taking off and landing, to navigation plotting and using various landmarks as clues to reach your destination. However, the tutorial doesn’t cover basic topics like how aircrafts fly and the aerodynamics involved. The game expects you to have some level of understanding about how aerodynamics and physics associated with flying work. So, if you are expecting something that will explain the very basics of flying then be ready to get disappointed as this is simply not what the game is aiming for.

"On the simulation front, you can fetch real time weather for the location you are travelling from along with a number of custom settings. So, you obviously have access to the time but you can also throw in stuff like snow or storm if you want a challenging flight."

Microsoft Flight Simulator comes in three variants which are Standard, Deluxe, and Premium Deluxe. We got the opportunity to review the Premium Deluxe version which includes 30 aircrafts and 40 handcrafted airports. The other two versions have slightly less number of aircrafts and handcrafted airports but here’s the thing. The other two editions will still have those airports except that they won’t be as detailed as the higher version, which kind of makes this tier based pricing questionable. I am sure the publisher may have their reasons for locking additional content behind a price gate, but I am not a fan of such a practice. Airports and aircrafts are an integral part of a simulation game and having them locked behind different editions seems a bit of a predatory practice to me.

Regardless, aircrafts in the Premium Deluxe version are solid with choices from Turboprops to Jets which handle in their own unique way and are close to their real world counterparts. On the airports front, Microsoft Flight Simulator reportedly features over 37,000 which is a massive boost compared to the 24,000 found in 2006’s FSX. I tried out a couple of airports that I have visited and they seem to be a close replica of them. So, essentially, you can travel literally the entire world in Microsoft Flight Simulator which is saying something.

Furthermore, on the simulation front, you can fetch real time weather for the location you are travelling from along with a number of custom settings. So, you obviously have access to the time but you can also throw in stuff like snow or storm if you want a challenging flight. You can also Wind Layers in the atmosphere along with the ability to adjust intricate details like precipitation, snow depth and the intensity of lightning. In short, you can either have the most peaceful flight of your life, or if you are daring enough, have a nightmare.

"Aircrafts no longer handle like they are sliding on ice, rather there is a certain weight to the air thereby impacting the mass distribution of the aircrafts while they move around. "

The physics has seen a massive boost too compared to the last entry. Nearby environmental objects like buildings and landmarks will have an impact on your flight since the air pressure will be different in these areas thereby creating turbulence. Aircrafts no longer handle like they are sliding on ice, rather there is a certain weight to the air thereby impacting the mass distribution of the aircrafts while they move around.  With new technology in hand, the developers have implemented volumetric clouds and as such you can expect some level of turbulence as you tear through them.

The developers have also implemented new friction framework features that depend on the kind of material the tires will land on. So, expect the tire rubber to behave differently on cement compared to say, grass. The cockpit is also detailed with a ton of options including but not limited to a checklist before starting the engine such as fuel quantity to battery master switch. Again, all of this can be manually controlled or fully automatic, thereby making the game appeal to all kinds of audiences.

Besides the option to travel anywhere you want, the game also offers a couple of other modes. One of them is the Activities mode which either puts you in a difficult landing scenario or Bush Trips that makes you travel across long distances from point A to point B. I found the former to be quite addictive as it presents a number of demanding landing scenarios with difficult twists and turns in terms of navigation and weather behavior. So be it landing in the strong winds of the Bahamas or making a halt in Jackson in USA, the landing challenges are easily one of the strongest points of the game. There are also live events but at the time of writing this review, there was only one available in the form of a landing challenge. I expect more to be added by the time the game’s launch servers go live.

"Regardless of the performance issues, Microsoft Flight Simulator looks absolutely amazing. Asobo Studio has utilized the Azure AI to render models of several environmental models and Bing Maps to replicate the world."

I also wanted to make a mention of some of the additional options that simulation fans will value. Besides the  graphics options, which I will get to in a bit, the game offers an in-depth camera system where you can control not only the different angles but also smaller details like zoom speed and camera shake. You can also control the sound effects of aircraft warnings, engine and cockpit along with the ability to define air traffic, airport on-ground vehicles and boat density and live weather. All of this may seem like inconsequential to some players but for a simulation game, the ability to have control over granular details is appreciated.

On the graphical options front, Microsoft Flight Simulator is easily a beast. With a host of options like terrain detail, buildings, grass, bushes, windshield effects, ambient occlusion…there is literally a ton of settings you can tweak. Unfortunately, performance is a major issue at this point. The developers recommend an AMD Ryzen 5 1500X, NVIDIA GTX 970 and 16GB of memory. The PC we ran this game on featured a GTX 1080Ti, AMD Ryzen 7 1700, 16GB of Memory, M.2 SSD with internet speed of 200 Mbps. I frequently ran into performance issues at Ultra settings at 1080p resolution. Sometimes the game may fall down to below 20 fps and then it will have long stretches of 30 to 40 frames per second.

I lowered some of the settings but that didn’t make any difference. Performance was absolutely horrific in specific scenarios like snow, storm, night time or while piloting a Boeing or an Airbus with frame rates dipping into single digit. In short, this game is in severe need of a performance patch. Furthermore, the load times are pretty long, especially when you are loading a scenario for the first time. However, I found subsequent restarts for those scenarios to be faster. Personally, I won’t count the long loading times as a negative as I completely understand the amount of stuff it’s loading. Regardless, not all players will be excited at the prospect of long loading times so there is that. 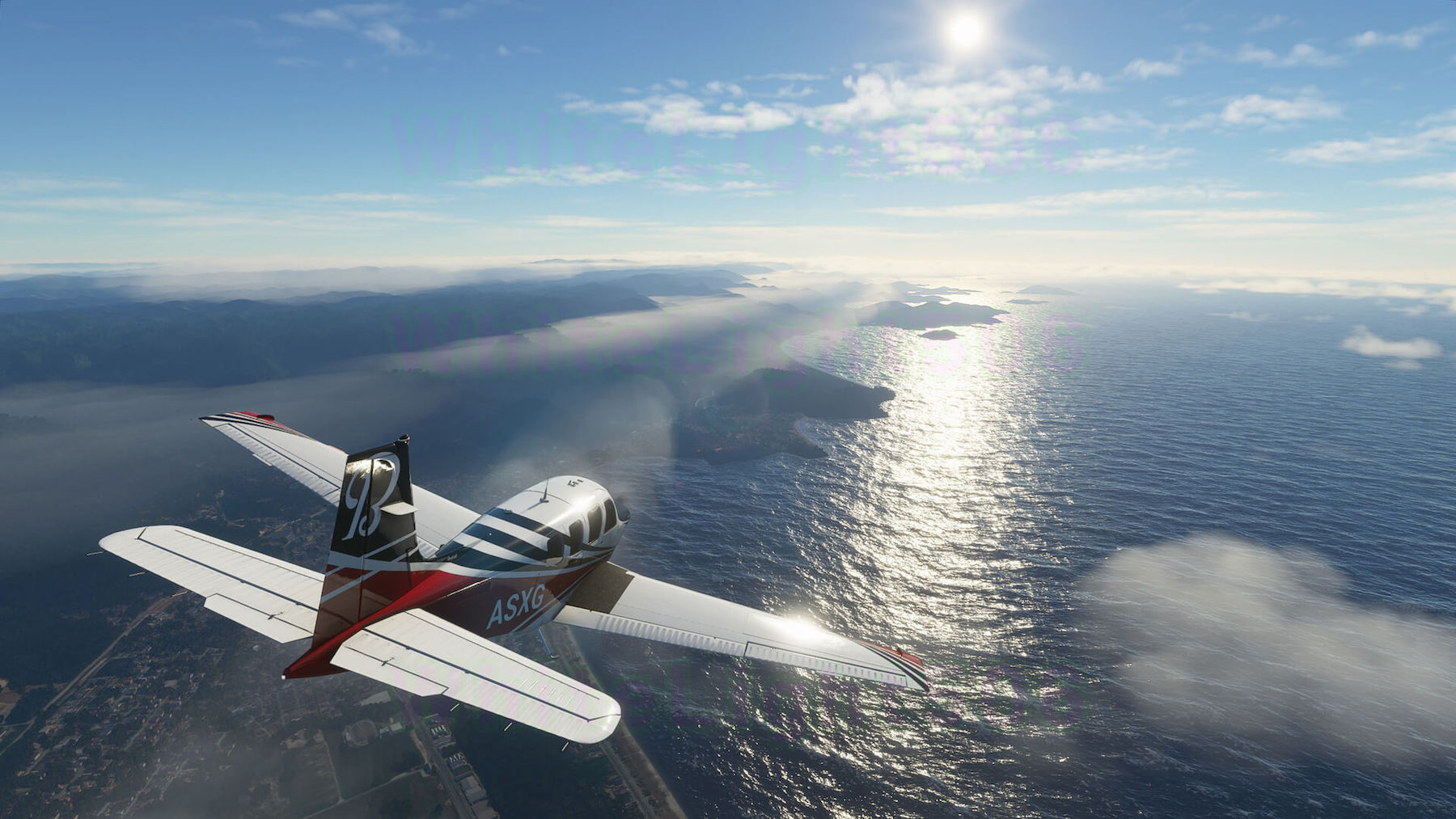 "Microsoft Flight Simulator does little wrong in terms of its simulation elements and the gameplay it’s aiming for."

Regardless of the performance issues, Microsoft Flight Simulator looks absolutely amazing. Asobo Studio has utilized the Azure AI to render models of several environmental models and Bing Maps to replicate the world. The level of detail is simply at altogether different level here with aircrafts, volumetric clouds, weather effects, and on ground objects rendered at an exemplary level. Of course, you will come across bland textures here and there which look terrible up close but that doesn’t take away even an inch from the technical marvel that is Microsoft Flight Simulator.

Microsoft Flight Simulator does little wrong in terms of its simulation elements and the gameplay it’s aiming for. Of course, there are some pretty terrible performance issues with the game but if that is ironed out in the coming days, you will have an experience that will be second to none.

Performance issues, tier based pricing for different editions is disappointing.

Final Verdict:
AMAZING
Severe performance issues aside, Microsoft Flight Simulator is a spectacular game which manages to nail the simulation mechanics with mind-blowing visuals.
A copy of this game was provided by Developer/Publisher/Distributor/PR Agency for review purposes. Click here to know more about our Reviews Policy.