Microsoft Rewarding Loyal Gamers With Free Games And Xbox One

It’s a good day to be an Xbox junkie 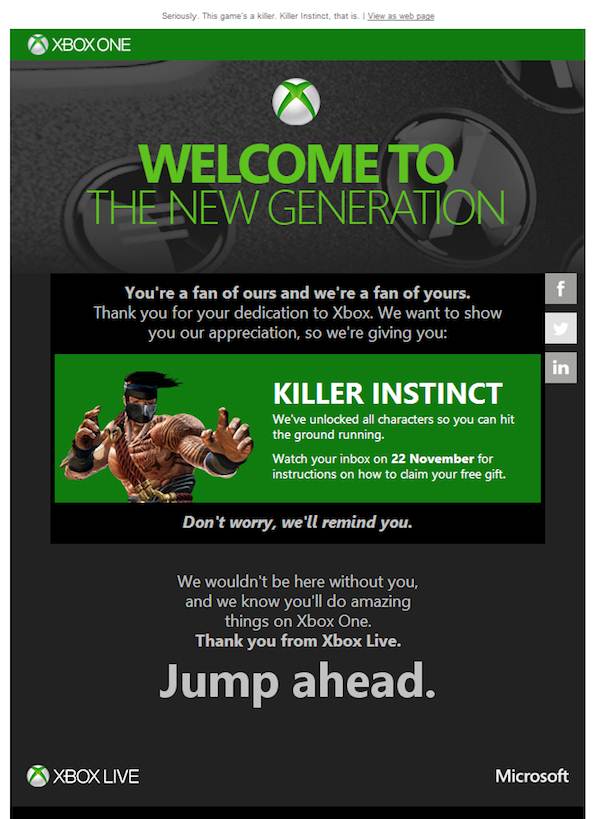 Earlier today several lucky dedicated Xbox gamers from around the world received an email from Microsoft – This email promised them one of a couple of prizes as a thanks for being such a loyal customer. These prizes are reportedly either a free completely version of Killer Instinct to be downloaded for Xbox One, or the console itself.

Understandably incredulous, several of these email recipients took to Twitter to ask the giveaway was for real. Twitter user @aceattorney asked, “Wait. Is this real? ‘Xbox just gave me a free #XboxOne to thank me for my dedication to Xbox. That’s awesome.”’

To which @Xbox responded: “@aceattorney We appreciate your ongoing support. Thank you for joining us on this journey! #GameOn #Xbox”.

Another twitter user asked what the requirements were for getting in on this special giveaway deal. The Xbox twitter responded saying that a variety of factors went into consideration, including Gamerscore and Xbox Live tenure.