MLB The Show 17 is by far the best sports game available on the PS4.

There’s nothing like being in a big, green field with the wind at your back and the crowd cheering you on from all directions. In developers SIE San Diego Studios’ MLB The Show 17, I got just that feeling. The game marks another great entry in the long running PlayStation exclusive series that is sure to make America’s favorite pasttime extremely popular among fans and newcomers alike. What’s great about The Show 17 is how San Diego Studios continues to listen to their fans and keeps the important aspects of the game front and center while implementing slight improvements along with a number of tweaks that make the overall experience better. And though The Show 17 is wholly the same game, generally speaking, as last year’s, it brings along some major improvements which adds some uniqueness to a genre that is really only prevalent on one platform.

In the past, the series has been a staple for graphics technology with crisp textures and detailed character models. Compared to previous entries, MLB The Show 17 features greatly improved models, better graphics and realistic looking players that look similar to their real life counterparts. Much of the improved graphical effects can be attributed to the lighting and shader models used in this year’s version. To add to the brilliant image quality and the detailed character models, each stadium is a near-perfect representation of what each one of them looks like in real life further adding to the authencity factor of the game. With a shaper and unique look and feel to each stadium, more face-scanned players than ever, and major improvements in the animation and physics system, the game benefits from that extra level of realism which was lacking in previous entries. MLB The Show 17 might possibly be the best looking sports game on the PS4 and that is saying something given the likes of NBA and FIFA set new benchmarks for visuals in the sports genre every year. 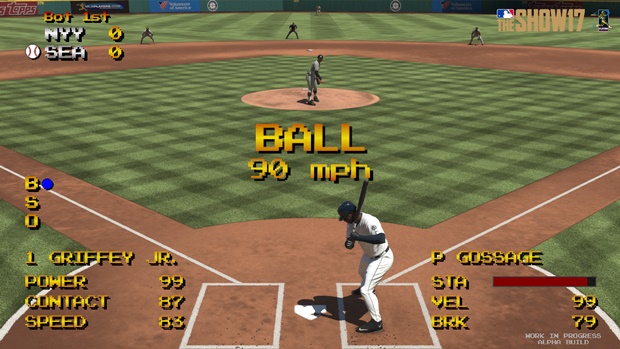 "MBL The Show 17 comes packed with a number of modes and amongst them is the new Retro Mode. Consider it as a throwback to the older days…a kind of a “pixelated” game mode that’s similar to that of the NES era, and it looks and plays great."

MBL The Show 17 comes packed with a number of modes and amongst them is the new Retro Mode. Consider it as a throwback to the older days…a kind of a “pixelated” game mode that’s similar to that of the NES era, and it looks and plays great. With the 8-bit feel mixed along with modern day physics, this mode rekindled my nostalgisa of 1990s gaming. This mode features retro text fonts, a rather simple control scheme (which relies only on a single button by the way) but most importantly it’s truly fun and a blast to play. Of course, hardcore fans will not find it to be anything special, but it does add a bit of spice to the mix, something which annual franchises like MLB The Show needs to freshen things up.

“Road to the Show” is back in MLB The Show 17 with a story mode titled “Pave Your Path” and it’s an improvement over last year’s iteration in just about every way. In previous editions, the player would take on the role of a character and play with him to improve his skills. However, in this year’s version, the game gives a look into your character and shares insights into what he’s going through with each player action. So what happens in your on and off time will determine your skill level later on. For starters, this mode is like an RPG, your decisions matter on and off the field. For example, your coach may ask you try out a different position/role and it’s upon the player to either agree or disagree via a number of narrative/conversation choices. Those who aren’t fond of wielding around their black mage and  traversing deep dungeons to thwart the dragon and save the princess don’t have to worry. It’s not that type of RPG, and it’s not severely deep, but it is interesting nonetheless. The only glaring flaw of this mode is the repeated conversation options which kind of impacts the overall experience, albeit in a small way. 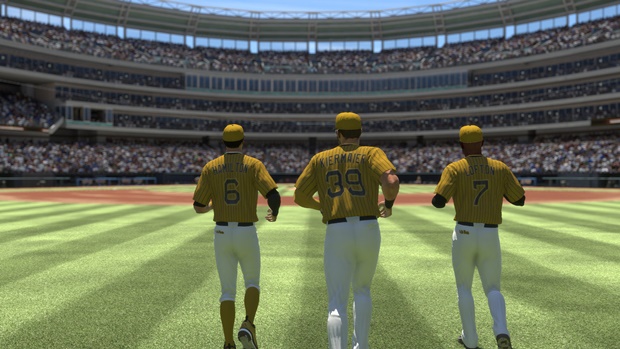 "The two standout modes in “Dyanasty” are “Conquest” and “Battle Royale”. “Conquest” is a single player strategy focused experience in which you take on other MLB teams whereas “Battle Royale” requires your team to participate in an elimanation style tournament to access rewards. "

Once you are done with the story mode, it’s time to jump into the game’s fantastic “Franchise” mode. Featuring a brand new system called “Critical Situations”, players will be allowed to simulate almost every aspect of the game including no-hit bids and other game winning situations (with the exceptions being late-innings and individual milestones). Furthermore, the game allows you to play in “Player Lock” mode, which means you can play the entire season in this mode. Essentially, this mode gives you all the freedom you want by allowing you to control how you want to play.

And finally, we have the “Dynasty Mode” which allows you to build your team of 25 best players. The roaster is pretty decent in this mode, ranging from legends such as Ken Griffey Jr. to Jackie Robinson. You can unlock top level players via a ton of different ways such as playing  a lot MLB matches and earn reward items or participate in Weekly Missions and Program Challenges. Once your team is ready, you can then participate in several sub-modes such as “Ranked Seasons”, “Events”, “Conquest” and “Battle Royale” modes. The two standout modes in “Dyanasty” are “Conquest” and “Battle Royale. “Conquest” is a single player strategy focused experience in which you take on other MLB teams whereas “Battle Royale” requires your team to participate in an elimanation style tournament to access rewards. 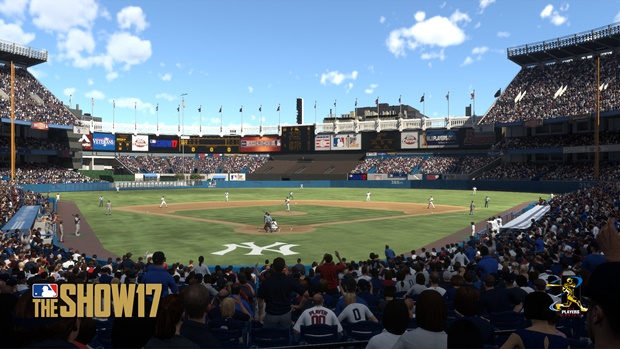 "After everything about The Show 17 is said and done (and if you are able to ignore the repetitive commentary and conversations), what is left is a game that’s full of enjoyment match after match."

Despite the addition of so many modes, the developers have ensured that The Show 17 offers a great perspective of baseball in the field while on your couch. It’s afterall a baseball game and it doesn’t compromise or shy away from delivering an exceptional on field experience. Each action is lightning fast and is perpetually better. The on field actions are fluid and the player character potrays them in an almost realistic fashion. The AI may be a a little stiff at times but they aren’t bad enough to express any sort of frustration towards them. Each session with this game made me realized how close MLB The Show 17 is close to the real life experience. Each ball pitch and strike felt well crafted. The controls were tight and felt perfectly suited and possibly even better than the previous games. There are only a few sports games out there that are so immersive that they make you feel like you are the part of the experience…actions that you perform on screen feel like you have performed them in real life…this “connect” between the two worlds is something that MLB The Show 17 excels in.

After everything about The Show 17 is said and done (and if you are able to ignore the repetitive commentary and conversations), what is left is a game that’s full of enjoyment match after match. With the added modes in the form of the Road To Show giving us some more interesting moments than in previous years and turning the entire experience into an RPG, it’s very nice to see what the developers are still trying to pull off so many games later. Throwing in the Retro Mode was a nice nostalgia twist that I didn’t see coming. And though it wasn’t a huge game changer, it definitely added some charm that keeps the game from feeling stiff. And finally, adding in Ken Griffey Jr. was surely another aspect that this game threw in for another throwback, and it was such a amazing flashback to the baseball games of the 1990’s that I can’t wait to go back and play more.

Tons of gameplay modes for both single and multiplayer components, huge improvements in lighting tech and character models, awesome moment to moment gameplay, Retro mode is a blast.

AI is a tad stiff, repetetive conversations and commentary.

Final Verdict:
AMAZING
With a ton of content to offer, MBL The Show 17 is perhaps the best sports game on the PS4, both from gameplay and visual perspectives.
A copy of this game was provided by Developer/Publisher/Distributor/PR Agency for review purposes. Click here to know more about our Reviews Policy.