What’s been exciting about the MLB The Show series over the past few years have been the steady improvements and unique qualities placed into this annual franchise. However, The Show 18 seems to settle on the status quo of its past iterations. In short, SIE San Diego Studio, the developers behind The Show 18, have not made many changes to the traits and gameplay mechanics that were found in the critically acclaimed The Show 17. Unfortunately, this means that the latest iteration of MLB The Show feels and plays just like its predecessor, thereby negating the feeling that you are actually playing a new entry.

Returning from last year’s excellent version in the franchise are nearly every MLB teams, stadiums and rosters. You can even continue your The Show 17 progress into The Show 18, but this will only transfer some minor features such as the updated player statistics. 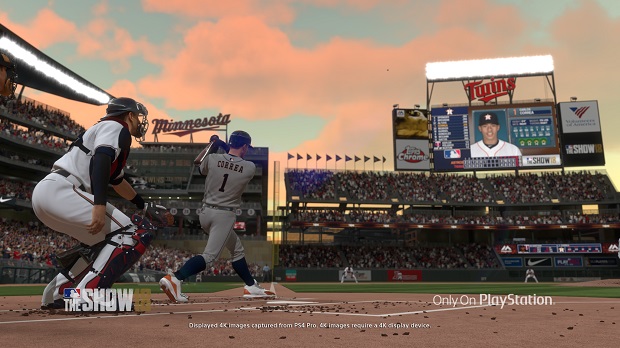 "Franchise Mode is the definitive experience within The Show 18."

The Show 18, like past games in the series, focuses first on controls. If you haven’t played one of The Shows in the past you’re in for a long ride. The series thrives off of its intuitive, manual, and interactive control schemes that can be chosen at the start of the game. There is a lot of stuff to get through; and navigating through each of the many different control schemes is a hassle, especially if you are a newcomer to the series. New players will probably get a little lost in picking controls and it may take longer for them than it probably should. There are distinct differences in each control layout, and finding which one is best for you may be time consuming. Once you go through and choose which control fits you best, there are actually a lot of tutorial screens you’ll be aching to get through just to play a full game of baseball. When you learn the controls, however, you will notice that they work quite well. With multi-directional hitting, several different throws, and numerous angles that you can set your player to play, getting that perfect hit or home run is going to take some practice.

Franchise Mode is the definitive experience within The Show 18. You’ll get the opportunity to became the GM and build up your team to be unstoppable in the league. By training, trading and collecting players along the season, you can have a team that can be memorable and built to perfection. This mode allows you to play several seasons and in the process become the legendary General Manager you’ve always dreamed of. 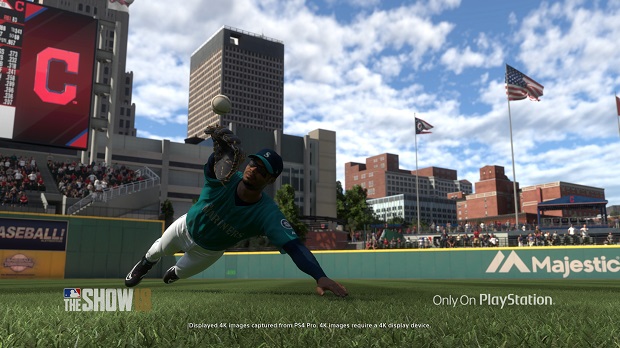 "Retro Mode is one of my favorites and is a perfect way to get started for those who may be new to The Show franchise, or even for the most experienced ones who just want to sit back and relax."

Road to the Show is the other major game mode that’s also back. You’ll have the chance to make your way through the game’s story mode and experience what it’s like to not just be in the game, but to be a player who experiences everything behind the scenes. There are some interesting elements to be found with Road to the Show, but, of course, most sports games with stories don’t really have in-depth narrative. However, this feature is appreciated nonetheless, specially for those who want a little more than just a ball game. Customizing your own character and carry them through complex situations, may make the story feel authentic for some players,.

One of the most aggravating aspects on The Show 18 is the menu system. This alone leaves one of the better features of the game, Retro Mode, buried in a set of screen boxes, that looks more like apps on an old Windows PC than a menu system that should be easy to navigate. Regardless, Retro Mode is one of my favorites and is a perfect way to get started for those who may be new to The Show franchise, or even for the most experienced ones who just want to sit back and relax. As it’s called, Retro mode steers the game back to very basic controls. The only real controls used are the X button and the analog sticks. Hit the ball or throw with X, and catch the ball by lining your character with the ball’s direction. That’s it. It’s very simple but a whole lot of fun. In Retro Mode, the graphics are toned down quite a bit, the perspective angle of the game is much more clear, and the music is also old fashioned. It’s quite a fun, but a rather short experience. 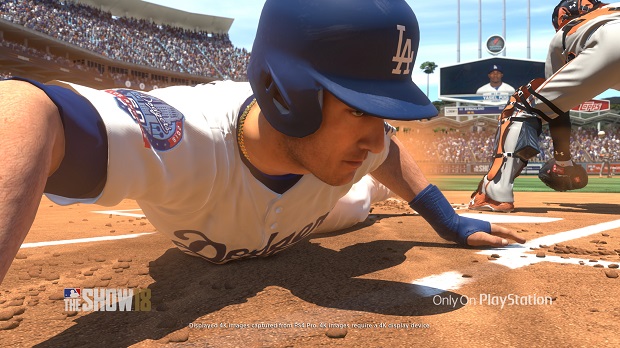 "MLB The Show 18 takes the good parts from last year’s game, but doesn’t build on the series’ winning formula."

The Show 18’s online mode is somewhat of a mixed bag. Online mode allowing you to create a dream team from some of the greatest players in history, along with the ability to customize and create your own original character. After going through what seemed like an endless stream of options, menus and disconnects, I finally got into a game after a good 20 minutes. Repeated time-out error codes and signal-lost connections hindered my play-time in online, although, once I was in the game I faced no disconnection issues.

Unforunately, my multiplayer experience was marred by lag. In fact, the lag was so bad that it felt like my opponents were walking all over me. There was even a time when the hitting mark disappeared, not to mention the fact that even moderate lag resulted into making the screen jittered and frame rates plummet.

One of my biggest problems in The Show franchise is its incredibly limited camera angle of the game. For the most part, you don’t get to see much of what’s around you. When you hit the ball, your character runs and the automatic systems take over, and you get these “Television” angled views.

On the plus side, the camera ensures that other elements get their screen time too, for example the stadiums. The stadiums in The Show 18 look very authentic and lovingly recreated. Being from Los Angeles, myself, I played as the Dodgers for most of my time in the game. Dodgers Stadium felt as though I was back in the stadium. The cheers of the crowd and the customizable weather really allowed me to get involved with the on-screen action.

Since The Show 18 is a fully licensed MLB game, nearly every player is present within the game. Unfortunately most of the players just don’t look like their actual selves, giving them a weird look at times. One of my favorite players, Yasiel Puig (of the L.A. Dodgers, of course), was noting like he appears in real life — and he’s actually a very popular baseball player, too. Some funny bugs during the game make him cross-eyed from time to time. It’s also immediately noticeable that characters on and off the field are horribly stiff. They look and act like puppets that only move in very restricting ways. It’s sad to see that so much time went into the stadiums but less attention has been given to player themselves.

Overall, MLB The Show 18 takes the good parts from last year’s game, but doesn’t build on the series’ winning formula. The unnecessarily expansive menu system is annoying, controls could be hard to learn for new comers, and camera could be much better. Despite its issues, MLB The Show 18 is a fun entry but it doesn’t top its phenomenal predecessor.

No noticeable improvements, controls can be complicated for newcomers, limited camera angles.

Final Verdict:
GOOD
MLB The Show 18 takes the good parts from last year's game, but doesn't build on the series much.
A copy of this game was provided by Developer/Publisher/Distributor/PR Agency for review purposes. Click here to know more about our Reviews Policy.