Infinity Ward has announced that the first DLC for Call of Duty: Modern Warfare 2, which will be a map pack, will be released on March 30th exclusively for the Xbox 360.  One month after March 30th, the map pack will then be available for the Playstation 3 and PC as this was a signed deal Infinity Ward made with Microsoft to have the first and second map pack exclusive to the Xbox 360 for one month.

To promote the new map pack, a new viral site has been put up called mapathy.com, creating a new word and the site will presumably have updates regadring the new DLC.  Currently the only info know on the DLC is the date of its release and that it will include multiplayer maps.  Here is the viral ad and definition of mapathy: 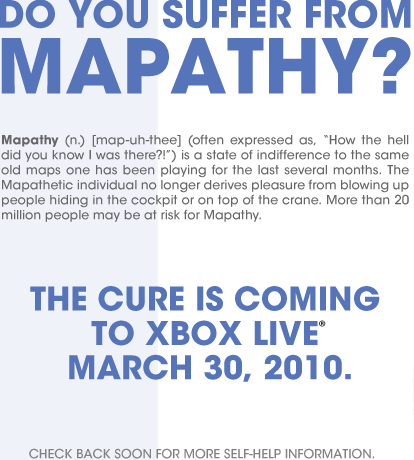 With the original two presidents of Infinity Ward having been laid off by Activision, the direction of the company seems to be blurry.  One thing is for sure, Activision will try to suck up as much money from gamers for as long as they can, having one of the best selling games of all time under their belt.  With that said, Activision has now added a third developer on the bill to create Call of Duty games.  Game Developer Sledgehammer will be making another Call of Duty game to be released in 2011.  Developer TreyArch will continue their work with a rumored Vietnam Call of Duty game to be released Fall of this year.