Capcom’s vision is finally realized in this glorious and breathtaking game.

You’ve run down the slopes, past the giant herbivores who are grazing in the fields, largely ignoring you and your partners who are following you as quietly as possible. You’ve vaulted over little cliffs, run past waterfalls, and through dark caves that required you to light a torch, just to be able to see where you are going.

All this while, you’ve tried to keep quiet, one hand on the weapon, stopping only to collect the rare plants and mushrooms that you can use later to brew some medicine, and mine some ores that you see, that you can use to craft better weapons and armor once you are out of here.

And then, without warning, you see it. Or maybe you hear it before you see it- a gigantic, hulking, monstrous form, casting the entire valley in its shadow, so big that it probably fills your entire field of vision. It notices you, and it seems to be readying itself to attack you. And unlike any sensible person, instead of making a mad, desperate run for it in the opposite direction as fast as possible, you unsheathe your weapon and charge at it. This is the world of Monster Hunter.

It’s simultaneously glorious and harsh, accommodating but unforgiving, charming and quirky, but difficult. It is a world in which characters go out of their way to smile at you, slowing down to explain things to you, trying to make you feel at home… and then they throw you into the deep end and expect you to fend for yourself. While you are being piled on by sharks.

Never has that analogy been more apt than when it comes to discussing Monster Hunter 4 Ultimate. The latest entry in Capcom’s long running action game series is absolutely glorious- it is the culmination of years of iterative improvements, experimenting, and evolution in the franchise, a grand realization of the vision for the series that Capcom has surely had all along, a game that stands head and shoulders as not only the best game in its franchise, but also one of the best games on the system that it is on. 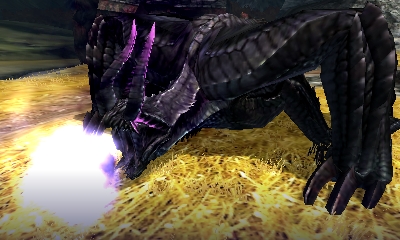 "The latest entry in Capcom's long running action game series is absolutely glorious- it is the culmination of years of iterative improvements, experimenting, and evolution in the franchise, a grand realization of the vision for the series that Capcom has surely had all along, a game that stands head and shoulders as not only the best game in its franchise, but also one of the best games on the system that it is on."

Everything that didn’t work about Monster Hunter, or that warranted criticism, has been tweaked and fixed, so that it is no longer a problem, all the while retaining the core identity of the series. People who have read my reviews on GamingBolt over the years are probably familiar with my distaste for Monster Hunter 3 and 3 Ultimate, which I felt were bloated, slow, and too obtuse and inaccessible for the average player, far too alienating.

People who have read my reviews will remember that I was especially enamored by Tecmo Koei’s Toukiden: Age of Demons for the PS Vita last year, calling it a better monster hunter than Monster Hunter, and being impressed by the various spins on the Monster Hunter formula that it brought.

For those of you who are uninitiated with Capcom’s series that is a veritable sensation- and there will be quite a lot of you, because Monster Hunter’s popularity remains confined to only a few circles- the series is exactly what its name would suggest that it is. It is a series about hunting monsters. In each of these games, you take the role of a (fully customizable) greenhorn hunter, just moving into a new town, that is plagued by attacks and other sorts of inconveniences all originating from the local surrounding wildlife.

You decide to join the Hunter’s Guild, and then help the town you are in, by venturing into the wilderness around you and taking down the wildlife. Along the way, you stop and gather anything in the wild that you might think would be useful- mushrooms, honey, bugs, fish, exotic plants, anything that you can craft into something useful later. You do battle with the monster and you take it down, and then you harvest it for materials too- its hide, its fur, its tusks, its bones, anything that you can use.

All your stats are tied to your gear. All of them. How hard your attacks hit, how much damage you can take, everything ties into your gear. So it’s very important that you improve your gear, because without good gear, you can’t take down the monsters around you; and to have good gear, you must first take down monsters. It becomes a grind, a self perpetuating grind, but in the best sense of the word, because unlike other RPGs, the grind here is active, not passive, and you have to earn your chops, instead of relying on random RNG determined drops. 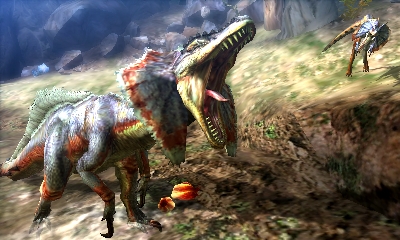 "Comparisons with Dark Souls are not entirely out of order."

In Monster Hunter 4 Ultimate, all of this comes down to the game punishing you if you just run in to destroy a monster after selecting a weapon you like (there are fourteen different weapon classes); you need to make sure you are well equipped, and you need to ensure you have observed the enemy, know their attack patterns, know when to sidestep and attack them. Go just running in with a hack and slash mentality, and the game will punish you. And if you find yourself hurt, or low on health, well, you need to sheath your weapon, and dig in your pockets for that potion you brewed a while ago, it will restore your health.

Except you better be on the move while doing this, because the game doesn’t pause for you while you check your inventory. And your attacks carry heft and weight- once you start an attack, you see it through. You can’t cancel your animation to suddenly perform a block or a counter- real life doesn’t work that way. And everything in Monster Hunter, from the monsters themselves to the environment, works against you, but never so that victory is impossible- only something that is earned instead of being handed to you.

This is how each Monster Hunter game has always worked, but 4 Ultimate makes the entire formula not just more palatable, but just flat out fun to play and amazingly addictive, by introducing a variety of fixes. For one, the game just is much faster and fast paced now. Gone is the slow, plodding, almost maddeningly intolerable pace of the previous games. While Monster Hunter 4 Ultimate is still not as lightning fast as Toukiden or Ragnarok Odyssey ACE were, it’s fast, quick, and agile. 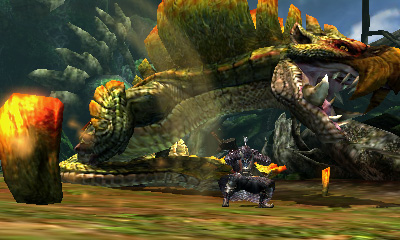 "Everything in Monster Hunter, from the monsters themselves to the environment, works against you, but never so that victory is impossible- only something that is earned instead of being handed to you."

Agility and mobility actually play a huge role in this game- not only do you need to constantly be on your toes and run when you sense an attack incoming (or when you see a monster collapse, and an opening for an attack), but the game adds a third dimension to proceedings thanks to its verticality.

Gone are the abhorrent underwater battles of Monster Hunter 3 Ultimate- instead, when you play, you can see some areas that are higher than others, and you can run, and try to gain higher ground, and then jump off, and land on the enemy, trying to stay on it as it tries to buck you off, while hacking away at it madly, dealing loads of damage. It is almost impossible to go back to the slower, more confined Monster Hunter of previous generations after playing the quick and mobile 4 Ultimate.

There are still more improvements and fixes- 4 Ultimate has full fledged, proper tutorials for everything, to try to ease you into its harsh world, making this easily the most accessible game in the series. The game immediately sets you off against huge monsters, albeit none that you cannot take down, immediately giving you a feeling of gratification (earned gratification at that), and keeping you invested.

The game has an actual story this time around, and while it is not as elaborate as the yarn in Toukiden, it is far beyond anything the series has attempted before, and this context makes all the difference in the world, keeping you playing. It has two new weapon classes, each which plays unlike anything before, and adds new dimensions to your strategy. It is also the first game in the series to feature full fledged online play on a portable system. 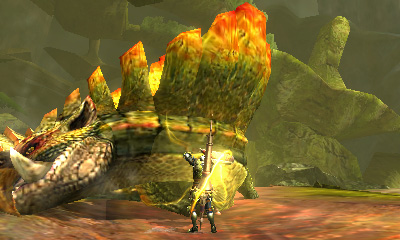 "It is almost impossible to go back to the slower, more confined Monster Hunter of previous generations after playing the quick and mobile 4 Ultimate."

This online play works wonderfully well- there is absolutely no lag, it supports full keyboard chat, and it is incredibly easy to set up and access. Coupled with just how well the game plays- the control issues of previous games are mostly gone, thanks to the game’s faster pace, and its good use of the touch screen to provide a lock on tab and a virtual D-pad for manual camera control- there are very few things to fault.

The game runs even better on New 3DS systems, with improved textures and loading times, and the C stick providing full camera control, eliminating the control issues that some might find otherwise exist on original 3DS and 2DS systems.

On the whole, this is a stunning game, then. Coming into Monster Hunter 4 Ultimate, I was skeptical. I did not expect this game to win me over. I did not expect it to impress me, especially after how staid I had found the 3 games, and how much better I had found some of the alternatives on the PS Vita. But I was wrong. Capcom’s series is gloriously reborn. Monster Hunter finally realizes its true potential and becomes the game it was always meant to be, in a game that is not only the best game in the series, but also one of the best games on the 3DS.

The age old addictive Monster Hunter formula and gameplay is here, reinvigorated and improved- faster, more accessible, more difficult, more rewarding; more weapon classes, more monsters, the addition of (lag free and seamless) online play; verticality is a legitimate game changer, and adds so much to the game; the addition of a story and context to the proceedings helps; New 3DS support is exemplary, and game looks and plays wonderfully on those systems.

The controls might be a bit hard to get used to on older 3DS systems.

Monster Hunter finally realizes its true potential and becomes the game it was always meant to be, in a game that is not only the best game in the series, but also one of the best games on the 3DS.

A copy of this game was provided by developer/publisher for review purposes. Click here to know more about our Reviews Policy.
Tagged With: 3DS, capcom, monster hunter 4 ultimate, Nintendo