Accessible and yet challenging, Monster Hunter Generations makes a compelling case for being the best game in the series yet.

So it’s basically good news that Monster Hunter Generations, the newest entry in the franchise that has just launched on the Nintendo 3DS, takes 4 Ultimate as its base, and then builds upon it. All of 4 Ultimate‘s additions, from its new weapons (and their associated playstyles) to abilities like jumping and vertical attacks, are retained in Generations– and to build upon them, Capcom throws in a couple of new mechanics into the mix, too.

Chief among those are the Hunting Styles and Hunting Arts. Hunting Styles are what I suppose is the closest the franchise has come to giving your character a ‘class’ yet- you choose one of many different styles, and each style gives you different benefits (mostly in the form of how many Hunting Styles you can equip). Different Hunting Styles can emphasize traditional combo-style combat, a preference for more Hunting Arts over traditional combat, defensive play, and more. The good news here is that there is a Style for those of you who don’t want much of a change in how you play the game- but for others, the addition of the Styles definitely mixes things up. As for Hunter Arts, these are specific attacks and buffs that are activated when their meter fills up, and they can be anything from automatic combos dealing in massive damage to stamina boosts. The number of Arts you can have active at any given time depends on what Hunter Style you have chosen.

"It’s basically good news that Monster Hunter Generations, the newest entry in the franchise that has just launched on the Nintendo 3DS, takes 4 Ultimate as its base, and then builds upon it."

Together, Hunter Styles and Hunter Arts really mix up the moment to moment gameplay and flow of the series, giving players more options and allowing them to approach encounters in more varied ways. Monster Hunter has always emphasized individual encounters with monsters, and the variability that accompanies each, owing to the monster in question’s behavior and attack patterns, the environment you are in, and your own weapon and fighting style- and now there’s still more thrown into the mix.

Monster Hunter Generations also makes the most major and dramatic concession the series has made to newcomers yet- no, there still aren’t proper dedicated tutorials (there are reams of text and optional tutorial missions you could participate in, though), but you can play as a Prowler now, which changes things substantially. Prowlers aren’t allowed to use items, but they can mine, fish, and harvest resources without needing to use consumable resources, unlike regular hunters. They also get nine attempts at taking out a monster instead of the standard three (meaning you get more chances to figure out just what the hell it is you should be doing), as well as a whole host of abilities which they gain by leveling up.

All put together, they are an easy way for newcomers to get into the game and get an idea of its flow and systems- and for advanced players, they also provide an entirely different style of play than what they might be accustomed to, or even than what they might get from the game’s Hunter Styles and Combos.

But these concessions to newcomers don’t make Monster Hunter Generations simplified or streamlined in any way, and the series’ famous, almost frustratingly obtuse difficulty remains in this game unscathed. Unlike just about any other RPG or action adventure game in the market, Monster Hunter demands patience, resilience, observation, and learning through trial and error from the player. There are no HP bars over enemies, no obvious weak spots- the player has to understand the environment, understand the monster they will be facing, its attack patterns and nature, prepare themselves with the proper equipment, and then take it on with great patience, never rushing into it, never getting greedy. Frame perfect timing and animations all come into play, giving the moment to moment gameplay of Monster Hunter a flow not unlike Dark Souls‘.

Where Generations takes so many cues from 4 Ultimate, the one area where it is a definite regression from that game is in the narrative focus- Monster Hunter 4 Ultimate‘s story was never going to win any awards, but it provided the campaign a nice cohesion and focus, and provided some context to the player’s fights with the gigantic monsters they were facing. Monster Hunter Generations is, on the whole, more narratively challenged than 4 Ultimate was, and more along the lines of older Monster Hunter games, to the extent that it makes all the contextual window dressing, like the various villages and NPCs you encounter, rather pointless. Happily enough, the UI and structure of the game is fine tuned so well that the player can sidestep all of that, and get to the meat and bones gameplay straight up, should they wish to. 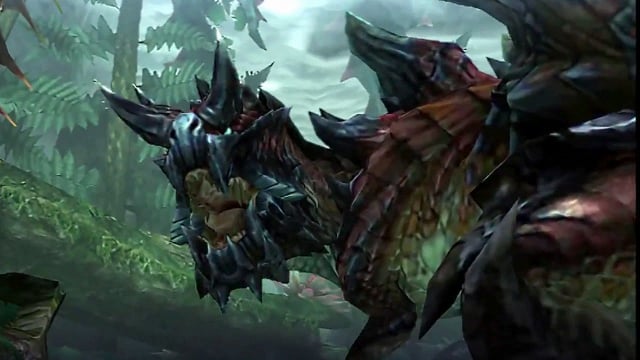 This includes the online mode- Monster Hunter Generations inherits the excellent online modes and functionality of Monster Hunter 4 Ultimate, with the full range and suite of features that that game had available to players. Online connections are extremely stable, with no latency and lag, and no disconnections, and in spite of the lack of voice chat functionality, the implementation of online play in the game leaves little to be desired.

All said and done, Generations is easily recommended, and far more than any previous title in the franchise, it can be picked up even by unsuspecting laymen with ease, and without anything in the way of warnings or qualifiers attached to any recommendations. Franchise veterans, meanwhile, will find another meaty and in depth experience to sink their teeth into. As difficult as the series is famously known to be, but still the most accessible title in the franchise, Monster Hunter Generations makes a compelling case for being the best game in the series, and one of the very best on the 3DS.

This game was reviewed on a New Nintendo 3DS.

Final Verdict:
GREAT
Monster Hunter Generations makes a compelling case for being the best game in the series, and one of the very best on the 3DS.
A copy of this game was provided by Developer/Publisher/Distributor/PR Agency for review purposes. Click here to know more about our Reviews Policy.