Monster Hunter Rise (PS5) Review – Rise Up to the Challenge

When Monster Hunter World released in 2018, not only did it take the gaming world by storm, but it introduced millions of players to the unique and rewarding Monster Hunter gameplay form in its biggest and most fully realized version yet. Monster Hunter Rise, the next main installment in the series, launched on Switch back in 2021 but is finally making its way to PlayStation and Xbox consoles, and it builds upon the strong direction the franchise took with World. Though smaller in scope and not quite as revolutionary or bold in its new ideas, Rise is exactly what a Monster Hunter fan, new or old, would want from another installment. It’s jam-packed with opportunities for exploration, traversal, character building, and most importantly, hunting huge, intimidating monsters. It’s not going to win anyone over for whom the series hasn’t resonated in the past, but for anyone who wants more Monster Hunter, Rise has a good chunk of content to dive deep into.

Like past games, there’s not much by way of an engaging or compelling story in Monster Hunter Rise. You’re introduced to the concept of the Rampage early on, which poses a threat to your village with the possibility of attacks from major monsters. For the most part, though, the story of the game is what you make of it as you hunt monsters of increasing size and scope. Every target has some kind of backstory if you look for it, as many quests will unlock optional cutscenes that provide some lore for those who are willing to go out of their way, but all in all, the story is simply a soft contextualization of the many monsters you’re going to hunt and does its job adequately.

"Though smaller in scope and not quite as revolutionary or bold in its new ideas, Rise is exactly what a Monster Hunter fan, new or old, would want from another installment. It’s jam-packed with opportunities for exploration, traversal, character building, and most importantly, hunting huge, intimidating monsters."

Where you really have the opportunity to sink your teeth into Monster Hunter Rise is the gameplay. Quests are relatively straightforward in their asks of you: you’re almost always tasked with killing a certain number of a single type of monster. This allows the game to be as forward as possible with getting you into the meat of the game. By the end, the main quests are almost exclusively hunts of single, large monsters. Truthfully, even the quest structure still feels a bit constraining. The 50-minute time limit returns for most quests and still feels like an arbitrary amount of time, and more than once I found myself fighting and killing a monster outside of the quest to do so and being unable to get the reward for doing so.

However, I do appreciate the game’s ability to keep progression somewhat open. Quests are split into Village and Hub quests, effectively single player and multiplayer quests. The main story is told through Village quests, which are split into Urgent, Optional, and Key quests. Urgent quests are, expectedly, the most pressing events in the story and offer the biggest and best moments throughout the entire game, while key quests are done in groups at a time, asking you to complete, say, 4 out of a possible 5 available quests to progress in any order. In a game that’s so fundamentally centered around its eponymous core gameplay loop, it’s good that it at least allows you to do so at your own pace.

With that core gameplay loop, Monster Hunter has always forged its own path with a unique, more methodical gameplay system. As in past games, you’ll be tasked with fighting monsters, some of which can be massive, but you tend to take down their health in smaller amounts over a longer period of time. It’s a classic system of health and stamina management, balancing the ability to play aggressively with the ability to step back, learn a particular monster’s move set, and plan your best path forward. More often than not, the latter is not only the more prudent option, it’s the only option. 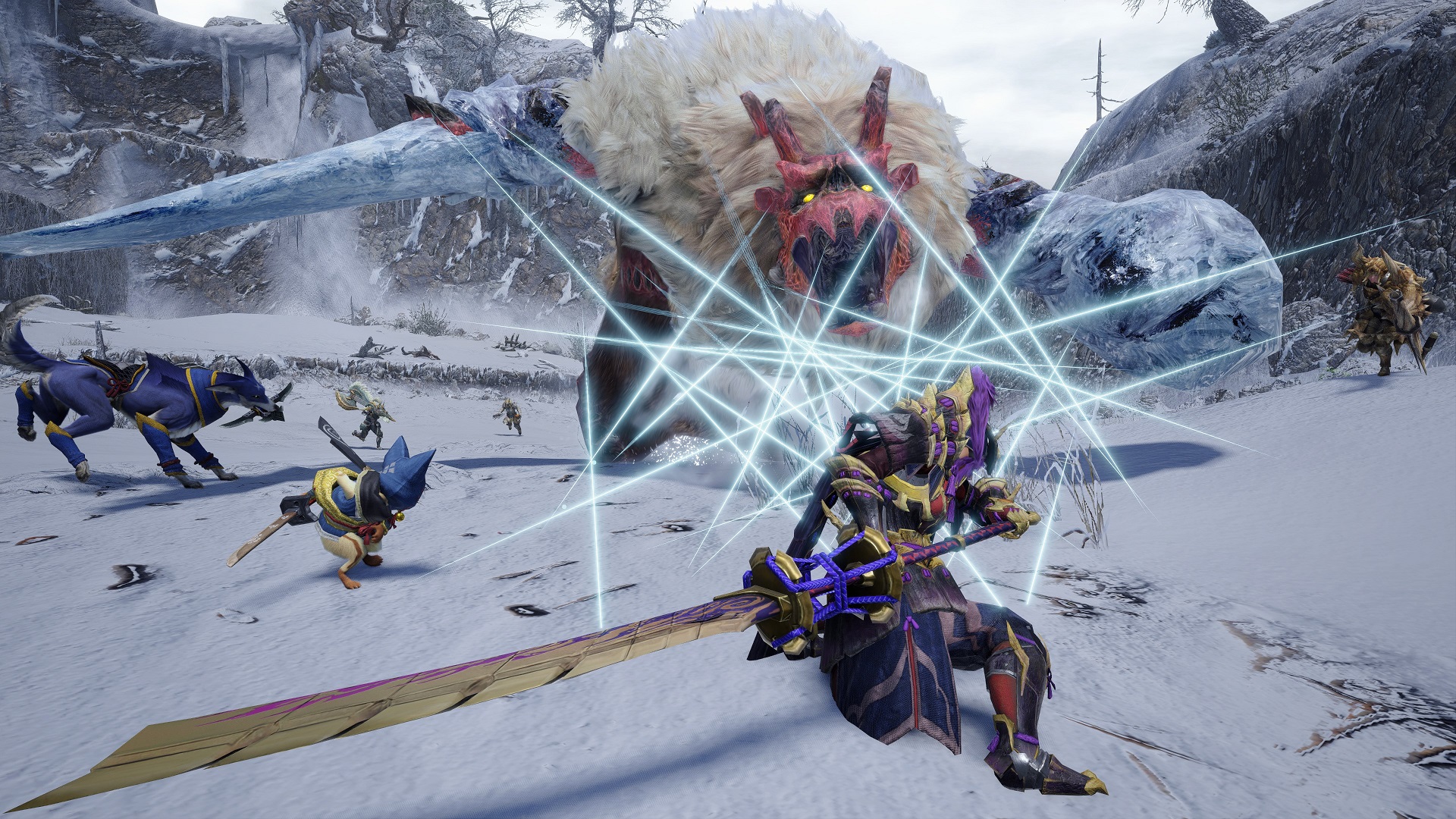 "While it seems intimidating, Monster Hunter Rise also does a great job of being as accessible as the franchise has ever been, even more so than World in some ways."

Monsters, which can range from familiar foes like the Kulu-Ya-Ku or Altaroth to new, more intimidating ones in later parts of the game, have wide ranging move sets that can become quickly lethal if you’re not careful, and it takes focus and determination over a longer period of time to ensure you can keep up and ultimately slay your foe. You may run into some clunky controls and slow, locked animations that can frustrate more than they add, but overall direct combat is highly rewarding. The other new type of combat comes in the new Rampage mode, which is effectively a tower defense mode to fight multiple monsters at once. While these aren’t particularly prevalent – they only happen a few times throughout the entire game –they are nice changes of pace, though I can’t say that I enjoyed playing a Rampage mission any more than a normal hunt.

While it seems intimidating, Monster Hunter Rise also does a great job of being as accessible as the franchise has ever been, even more so than World in some ways. While it certainly helps, this isn’t necessarily the type of game that requires you to grind endlessly and ensure you maximize as many stats as possible to be successful, and it feels more forgiving and rewarding for it. You still have to put in the work to kill a monster, but you don’t have to spend gobs of time outside of combat to do so. It also offers a wide range of weapons and combat types. I favored the dual blades, a quick, agile weapon that allowed me to move swiftly in and out of a hit range, but there are options for slower, heavier weapons or even ranged weapons, too. While my time favored the dual blades, my experience with every weapon felt relatively balanced, and I never felt like I was ever at a disadvantage because I chose a certain weapon type.

Other additions or tweaks to combat make it even more interesting and entertaining. One such addition is the return of Wyvern riding, the ability to ride and control certain monsters in combat. It doesn’t happen as much as I would like, nor is it as easy to control as it could be, but Wyvern riding is a fun way to increase the scale of major fights and is always satisfying to watch as a climactic moment in a long quest. Additionally, while World introduced a cat-like party member called a Palico, Rise introduces the Palamute, a dog-like party member that not only can be an AI member in combat but can also be ridden around the world for faster traversal and allows you to do more mundane tasks, such as sharpening your blade, while in transit. 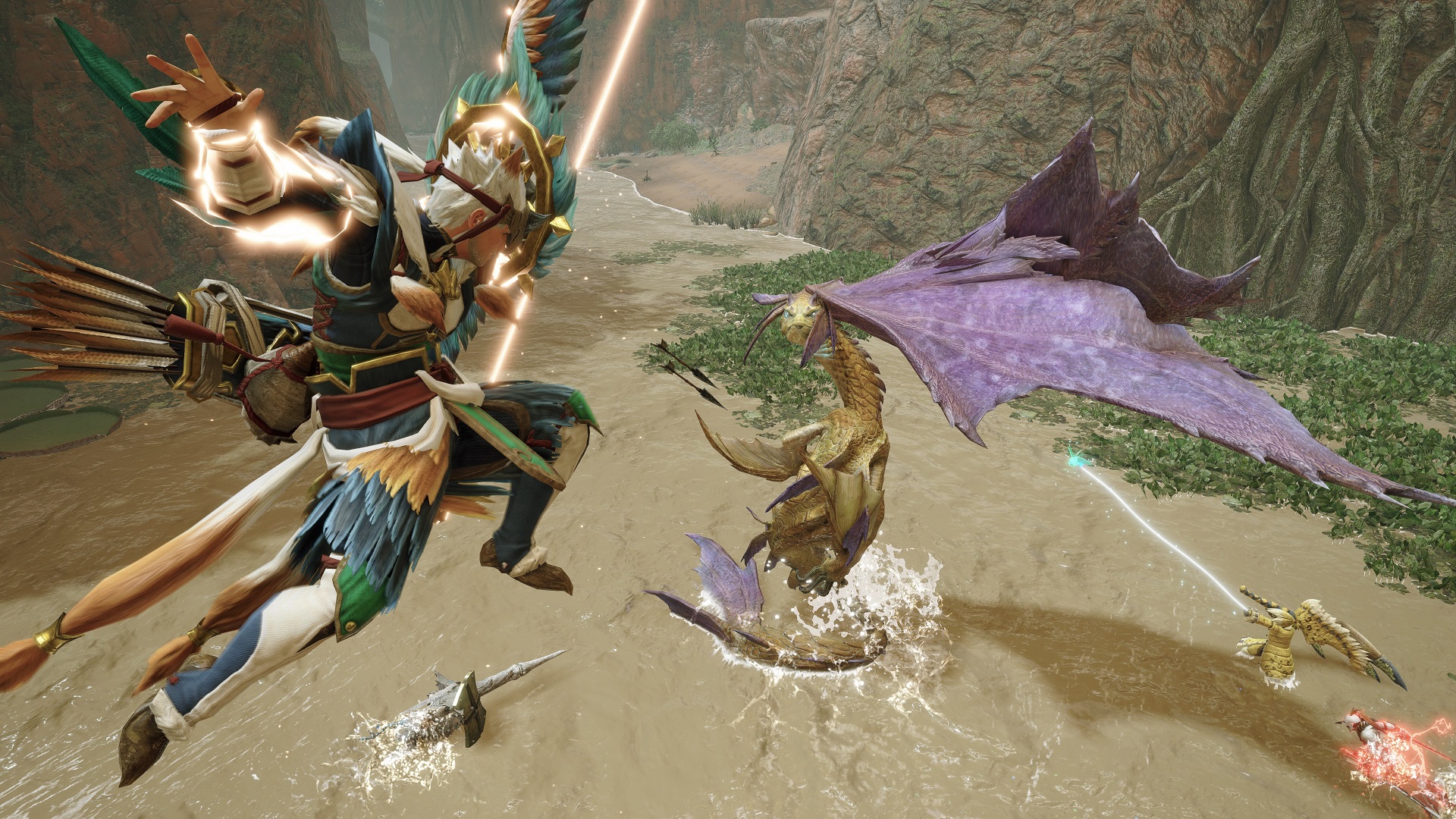 "Alongside riding the Palamute, you also have a Wirebug, which allows you to climb with relative freedom and zip from one place to another. Some of my favorite moments in the entire game are outside of combat, moving around the world like Spider-Man."

The addition of the Palamute signifies Monster Hunter Rise’s best change: its improved traversal. While there aren’t too many unique environments to explore, nor are they inherently huge, there are new ways to get around the maps and many new opportunities for verticality that allow the game to open up in interesting ways. Alongside riding the Palamute, you also have a Wirebug, which allows you to climb with relative freedom and zip from one place to another. Some of my favorite moments in the entire game are outside of combat, moving around the world like Spider-Man. In combat, traversal takes a bit of a back seat, as there aren’t too many monsters that require much vertical mobility, but for a game whose core gameplay is finding monsters and killing them, the finding aspect got much more enjoyable.

Monster Hunter has been on a great run, and it’s great to have another entry in the books that knows well why it works and emphasizes that as much as possible. Rise is as accessible and enjoyable as World, if not as content-rich, but it takes what made the formula work and continues pushing it forward. Not everything works perfectly, but for a game that has so firmly created a unique identity, Monster Hunter Rise provides some of the most rewarding, fun core gameplay the genre has offered to date.

Nothing to push the envelope; Some clunky controls.

Final Verdict:
GREAT
Monster Hunter Rise knows exactly why its formula works and emphasizes it to a more accessible and rewarding degree.
A copy of this game was provided by Developer/Publisher/Distributor/PR Agency for review purposes. Click here to know more about our Reviews Policy.