Even with slight performance issues, Iceborne still stands as an incredible expansion.

I‘ve had a love-hate relationship with looter games in the past few years. Chasing higher numbers and getting that dopamine hit off a lucky rare drop after hours of grinding – it was a satisfying and yet sometimes hollow feeling. And really, even with the new content and updates that these games have, they often miss something intangible, something downright non-quantifiable – the heart and spectacle of the pursuit. Monster Hunter World captures that feeling well and with Iceborne, that immense heart and spectacle has been dialed up substantially. 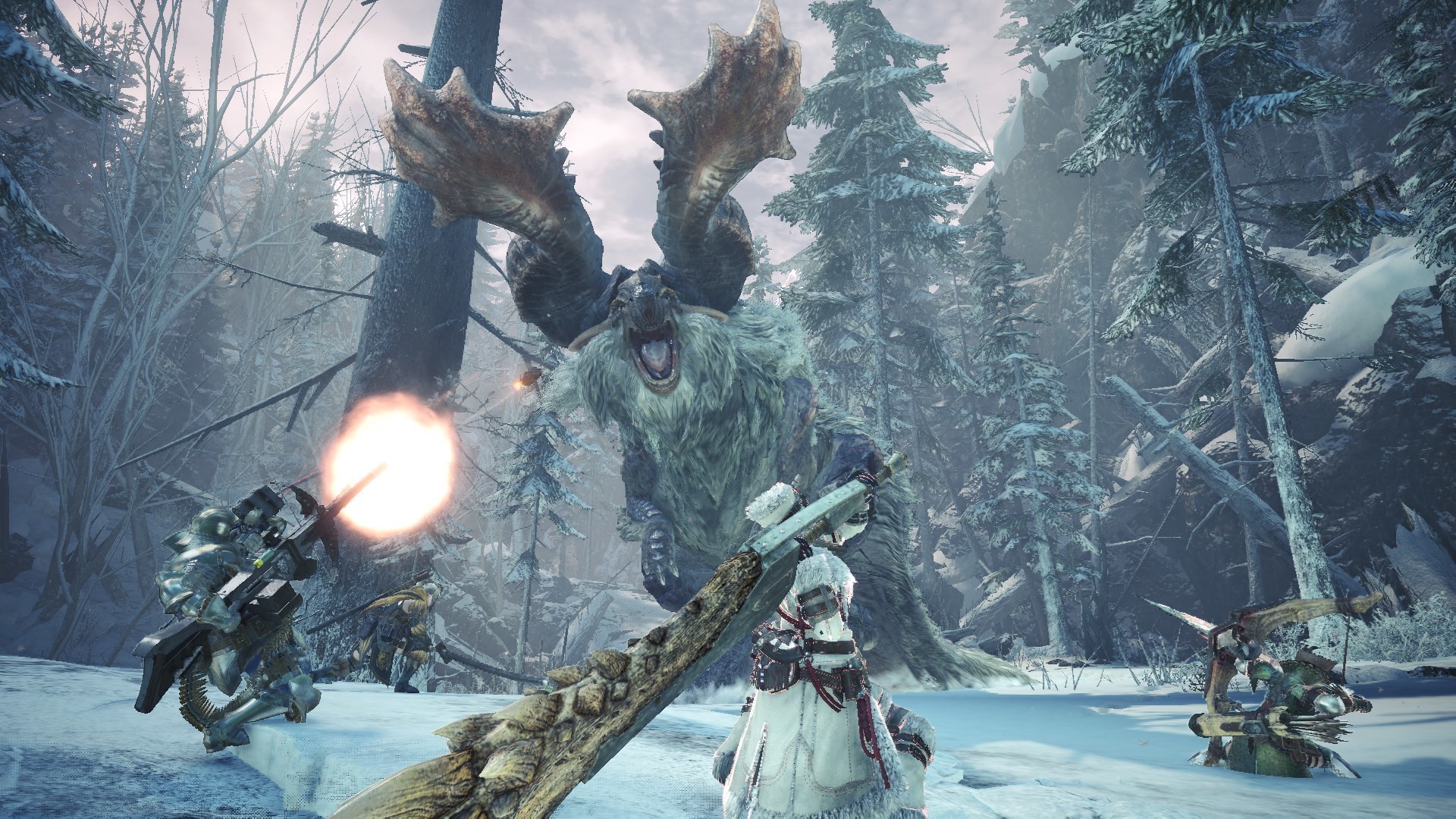 "Given reports of stronger rigs having issues, you might want to check how your system will fare before jumping in."

It could be while you successfully chain combos together with the Longsword, using a Foresight Slash at just the right moment to counter an attack. It could be when three monsters face off against each other in a roaring turf war for the ages. It could be your first time battling an Elder Dragon, struggling to overcome a venerable force of nature that could wipe the floor with you before eventually trivializing the fight. Despite nagging gameplay mechanics, its own share of RNG and grinding, and some performance issues, the PC version of Iceborne is every bit as excellent as its console brethren.

Let’s get the most important part out of the way: Your performance will vary. My setup consists of an Intel Core-i5 4440 running at 3.1 GHz, an Nvidia GeForce GTX 1060 with 6 GB VRAM and 8 GB RAM, which is not the best configuration. Running the game on a solid-state drive at least provided buttery smooth load times. Some frame drops occurred when readying up a quest, specifically after playing for some time, but otherwise the game ran very well at High settings.

My only concerns are texture pop in and a few random moments the course of several hours where everything would just freeze for a 2-3 seconds and then resume. It didn’t break the game or occur all that much, thankfully. Given reports of stronger rigs having issues, you might want to check how your system will fare before jumping in.

Otherwise, just as when it first released for consoles in September, the expansion is simply phenomenal. Players embark on a trip to Hoarfrost Reach after a swathe of Legiana migrate and come face to face with numerous new monsters like Banbaro and Beotodus while establishing a foothold. 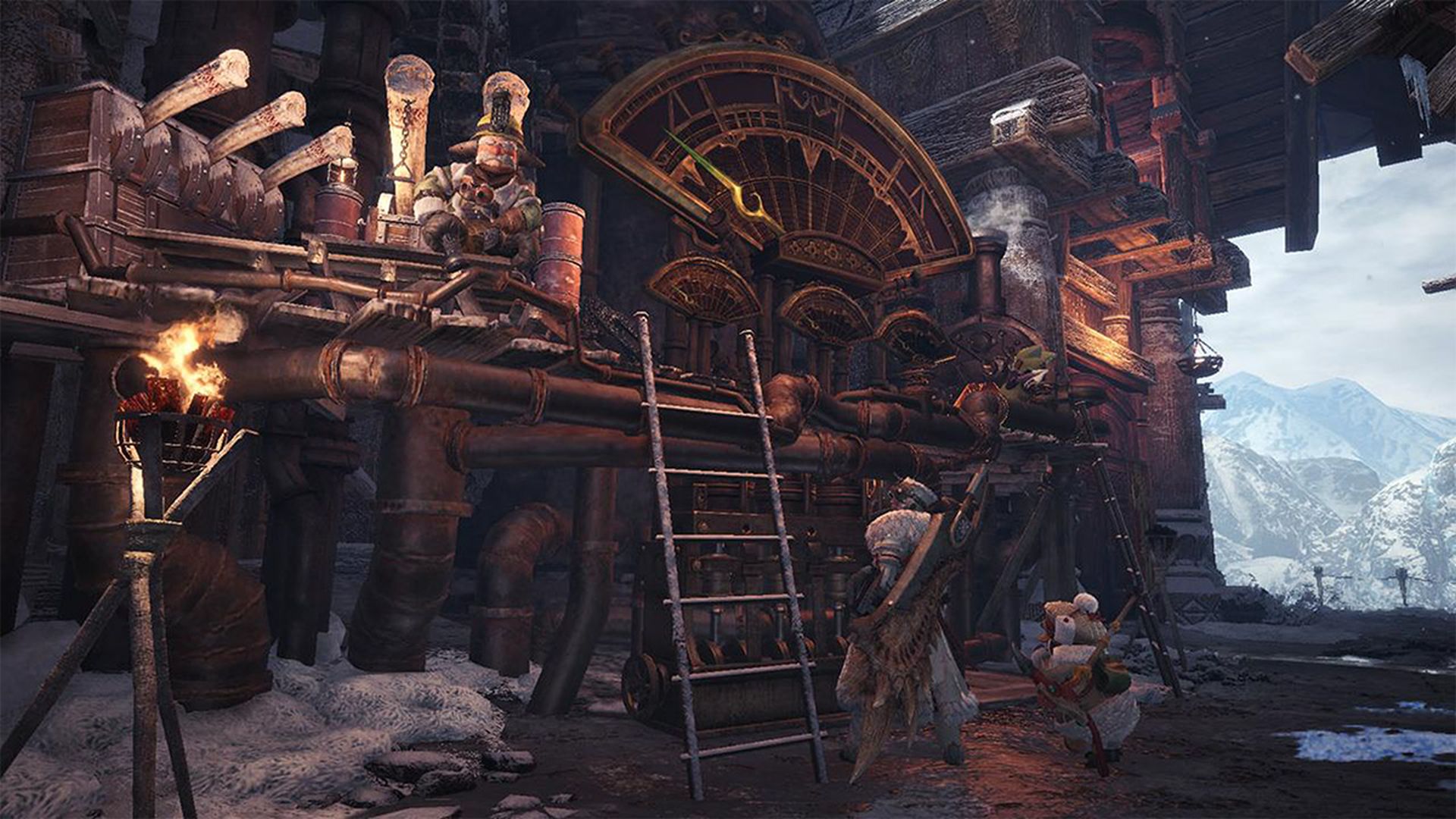 "Iceborne retains the same excellent weapon design depth while mixing in several new moves and mechanics like the Clutch Claw."

Eventually you found a new base in Seliana and take advantage of features like the Steamworks, a cute minigame which doles out items based on fuel deposited inside; the Surveyor Lens for taking pictures and netting different rewards; new Tail Riders for effectively catching up to targets while you sharpen weapons, apply buffs and so on; and of course, a bunch of new Master Rank weapons and armor. Overtime, you’ll come across new subspecies for established monsters like Viper Tobi-Kadachi, Fulgur Anjanath and more along with some series’ favourites like Nargacuga and Glavenus.

Hoarfrost Reach feels well-thought out and present interesting challenges like trudging through the snow and managing the cold (lest your max stamina starts depleting). There’s no denying that trails in the snow as you run through it, collapsible trees and the monsters look incredible on PC especially in higher resolution and better image quality. The sound design and background score are still amazing – one never tires of hearing the orchestral music dip during the lulls in combat, only to surge again when the fighting resumes.

Of course, the series’ calling card has always been the combat. Iceborne retains the same excellent weapon design depth while mixing in several new moves and mechanics like the Clutch Claw. It’s now possible to grapple onto monsters to attack them. You can load slinger ammo, grapple onto a monster’s head while it’s stunned and unload a slinger burst to steer it into a wall. This does good damage and knocks the monster down for some solid punishment. Of course, due to how perks like Weakness Exploit have been changed, you can also attack with the Claw to “weaken” a specific area of the monster for bonus affinity. 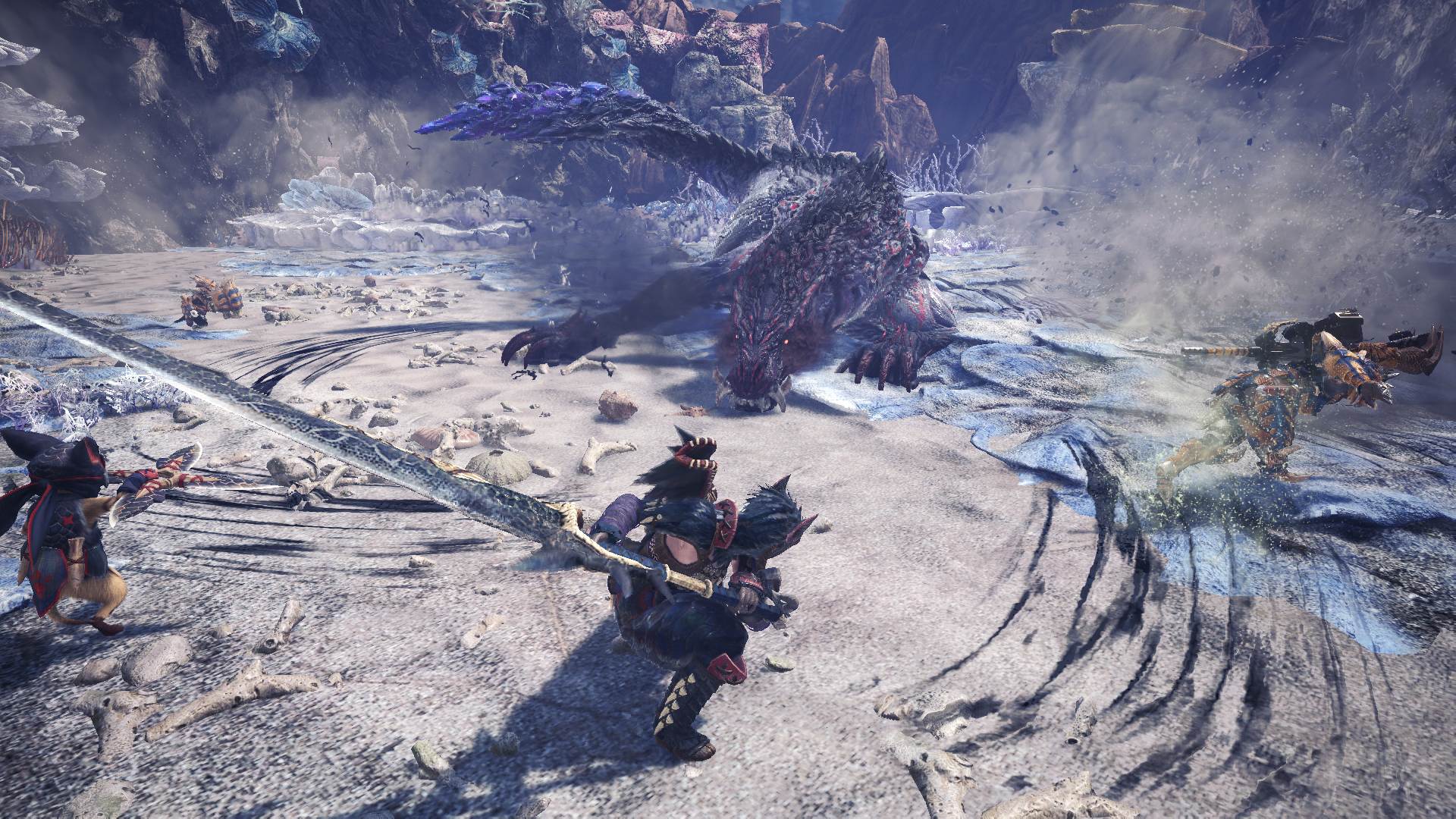 "The sheer volume of content in Iceborne, even as the PC version lacks updates like Rajang and Stygian Zinogre is also fairly staggering."

Now factor in the different moves – like sheathing the Longsword for an Iai Slash to immediately transition to a Slinger Burst to stun monsters, or starting an Element Discharge with the Switch Axe to transition into a grapple and finish with a Zero Sum Discharge on a monster – and you have even more complexity. It may take a while to get used to but the possibilities during combat are simply incredible.

The monsters themselves facilitate such possibilities quite well. While new foes carry new patterns and dangerous new conditions, newer subspecies have their own tricks to put a spin on classic fights. How you spec into facing them, like avoiding Nightshade Paolumu’s sleep gas or overcoming Glavenus’s attack range, can be challenging and fun. It’s for everyone, mind you – Master Rank is easy to get into but will quickly take you down a peg if you don’t grind out the right elemental weaknesses or specifically gear for some encounters. When everything falls into place and you have the right combination of tactics and gear, fights are almost zen-like in their own visceral way.

The sheer volume of content in Iceborne, even as the PC version lacks updates like Rajang and Stygian Zinogre (which are coming up soon), is also fairly staggering. Having this range of weapons and armor, complete with so many unique and revamped monsters, to say nothing of the expanded gameplay mechanics and opportunities, is simply incredible. That’s especially when you factor in that all of the monsters can be fought in Master Rank difficulty. 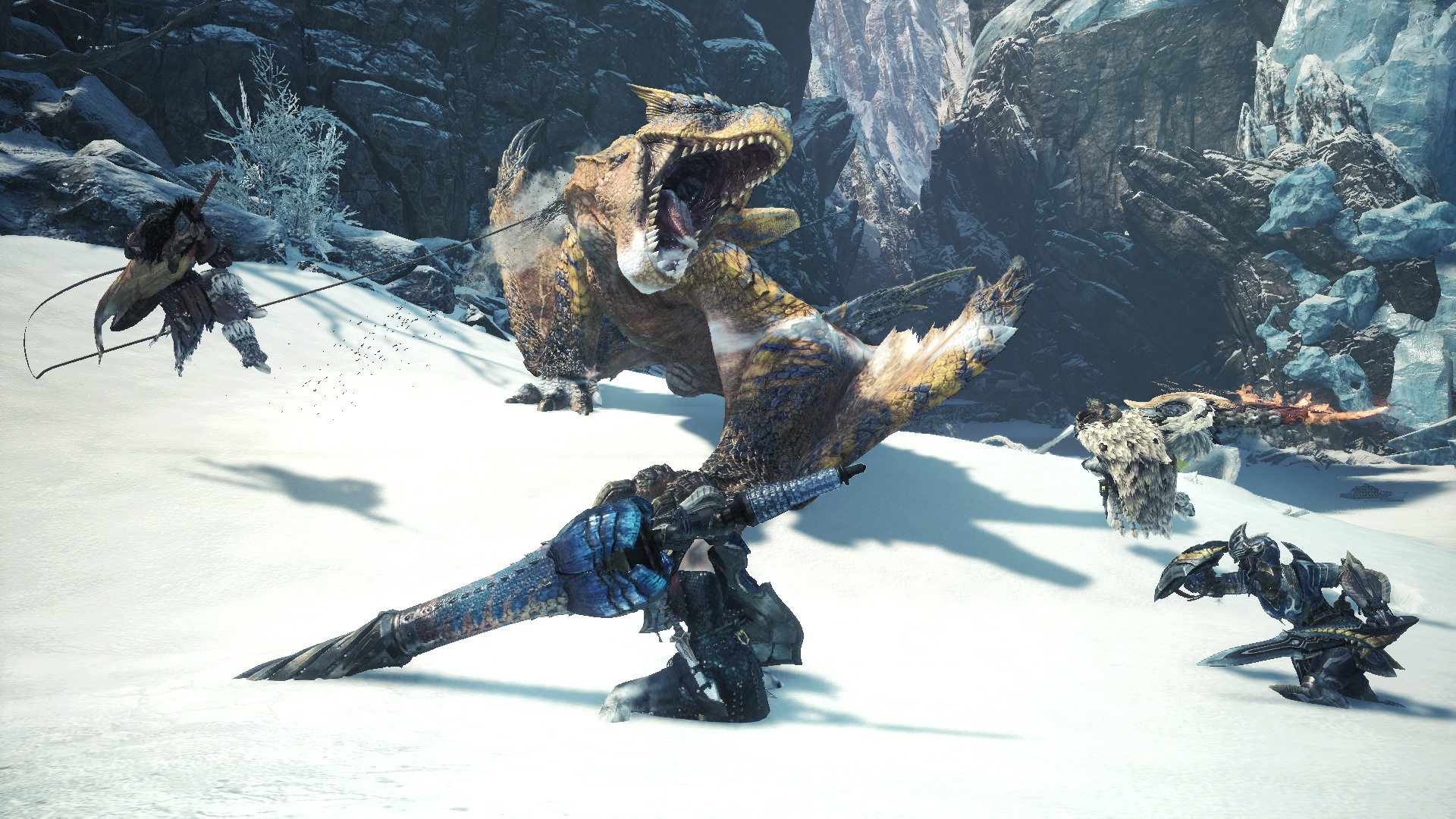 Make no mistake though – much of the gameplay still involves dealing with monster roars, stuns, chasing better decorations, breaking off monster parts for those rare materials, slight camera issues, strange hit boxes and so on. The gameplay loop may not appeal to every action RPG fan, particularly those looking to drop in for a quick session. Those willing to put in the time to learn the ins and outs of the title are in for a treat though.

For the Monster Hunter faithful, Monster Hunter World: Iceborne is the game at its very best. Its high stakes combat, mixed with a venerable sense of wonder and thrill, elevates it to the every top of the hack and slash food chain. It almost feels unfair to call this an expansion – it’s pretty much a new full game, and a great one at that. While one could criticize the story or find their own share of issues with the performance, Monster Hunter World: Iceborne represents a stellar expansion for fans and hardcore hunters alike, bursting with new and interesting activities that will keep you slaying for a good long while.

Gorgeous new region. New activities are excellent additions to the game. Tons of Master Rank weapons, armor and quests to battle through. New monsters and subspecies are awesome to fight. Gameplay mechanics like the Clutch Claw and new moves further diversify the stellar combat. End-game grind is way more fleshed out.

Your mileage will vary when it comes to performance. All the nagging aspects - like rough RNG, roars and hit box problems - still remain.

Final Verdict:
AMAZING
Despite launching several months later, Monster Hunter World: Iceborne on PC is a grand experience, full of awesome monsters to hunt, worthwhile weapons to grind and more depth to the combat. Even with performance issues and quirks unique to the series, Iceborne is simply essential for every Monster Hunter fan.
A copy of this game was provided by Developer/Publisher/Distributor/PR Agency for review purposes. Click here to know more about our Reviews Policy.