Monster Hunter World Xbox One X vs PS4 PRO Graphics Comparison: In-Depth Analysis of The Tech Behind The Game

An in-depth look at the tech behind Monster Hunter World.

Say what you will about the Japanese games industry but you have to agree that ever since Final Fantasy 15’s release back in November 2016, Japanese games are back with a bang. 2017 alone saw a plethora of Japanese hits such as Yakuza 0, Persona 5, Resident Evil 7, Gran Turismo Sport, The Legend of Zelda: Breath of the Wild, Super Mario Odyssey, Yakuza Kiwami, Nier: Automata and many others. In fact many of these franchises such as Yakuza 0 and Persona 5 performed splendily in the west, thereby making them relevant all over again, specially in the west. And with the advent of the Nintendo Switch, things seem like they will only be going up for the once declining Japanese games industry.

And trust me when I say this…Japan is a very critical component of this industry. The games industry performs best when Japan delivers in its AAA games space and this is what is exactly happening. Old Japanese IPs are coming back on consoles after years, and Monster Hunter World is one such case. Returning to consoles after a long, long time and having already shipped 5 million units within a week of its release, Monster Hunter World is already a resounding success and it will most definitely pave the way for more games from the series on consoles.

From a technical standpoint, the developers have been rather secretive about the game’s features and its implementation. Not much information has been released by the devs but what we know is that the game utilizes an advanced version of the MT Framework. Every major Monster Hunter game uses its ecological system to its strength and World is no different in this regard. The game’s engine uses a complex logic for rendering its detailed flora and fauna and inter-behavioral relationships between each species. Monster Hunter World features a ton of different life forms, each with their own inter-relations and artificial intelligence. This isn’t merely a game about hunting monsters but also about using the brilliant level design to your advantage and if possible using another life form to take down your foe. For example, take the case of Anjanath and its complex yet hostile relationship with Rathalos. This is just one example of the dynamic relation these beings have with each other. As they say, “The enemy of my enemy is my friend” except there are no friends in Monster Hunter World or may be Palico and its various companions are an exception.

Animations are also something that we wanted to highlight in this feature. Although the main protagonist’s animations could be laughable at times, the monsters’ design and their respective animations are brilliantly implemented. We a wide implementation of fur in various different ways and although it’s not up to the level of say, Shadow the Colossus on the PS4, it still matches the game’s art style. Each monster varies drastically from each other in terms of animations, exit strategy, the path they take during combat and also exhibit various states of emotions like anger, frustration and stress. 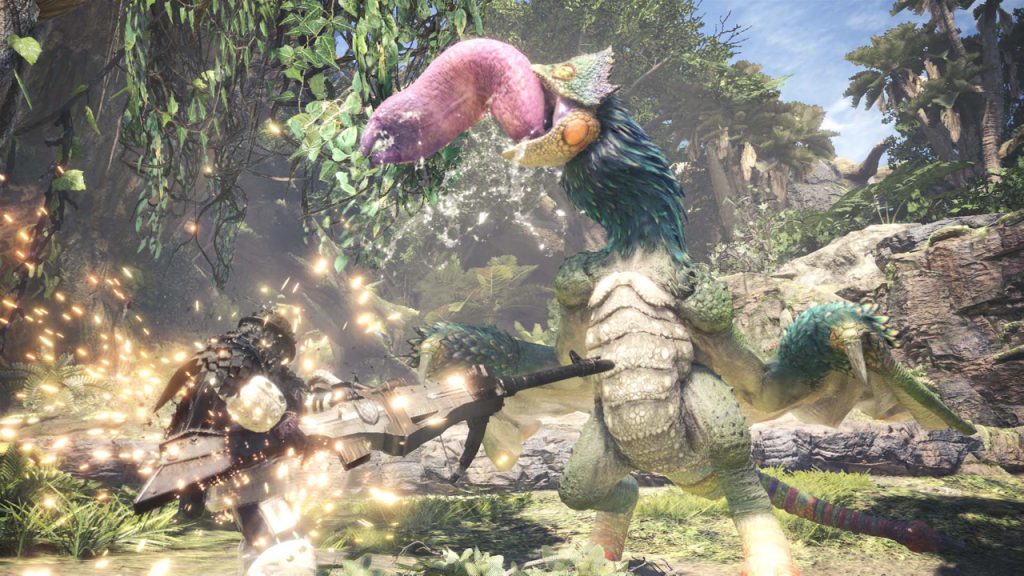 Once you get into the core gameplay of Monster Hunter World, you will be in awe with the game’s lush, filled with foliage enviroments. The game does not follow the usual open world methodology but rather it follows the open level solution with intricate variations in level design resulting into different paths, hidden alleys and pathways. The world of this game is extremely dynamic in nature and no two encounters are the same. However, despite the stunning attention to detail one can’t help but observe the lack of polish in some areas. Although the game looks amazing at times, it seems like it isn’t really pushing the visual boundaries of what is possible on the PS4 Pro and Xbox One X. Despite being a AAA game, its production values fell a bit short of our expectations. There are also several clipping and collision detection issues which can deter the experience at times. However, cutscenes are crafted quite well and most of the action sequences are choreographed beautifully.

On the technical front, Monster Hunter World supports both the PS4 Pro and Xbox One X versions right from day one. Now, the developers have been rather secretive about what kind of support these two iterative consoles were suppose to receive but now that we finally have the game in our hands, let us compare the two versions and deduct how much they differ from each other.

Much to our surprise, both versions feature three graphical settings. These are Prioritize Frame Rate, Prioritize Resolution and Prioritize Graphics. As the name suggests these modes intend to deliver higher frame rates, better image quality and better graphical parameters respectively. 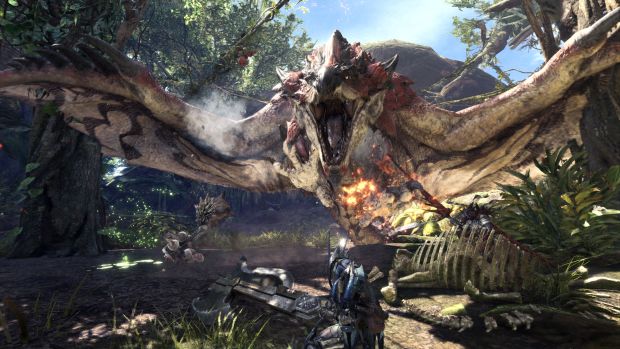 In Prioritize Resolution mode, the Xbox One X version hands out a native 1700p resolution compared to the checkerboard 1800p resolution. Due to the Xbox One X using a direct native renderer, its image quality definitely comes out as better compared to the PS4 Pro version. In Prioritize Frame Rate, both versions run at a native 1080p resolution with the target frame rate of 60fps. Unfortunately, neither of the two platforms reach that target in a stable manner. And finally we have the Prioritize Graphics mode where certain parameters like foliage density and draw distances are improved. We actually didn’t witness much difference between the PS4 Pro and Xbox One X versions, at least when seen from the minimum playing distance. The core assets seems to be one to one across both versions.

We also wanted to add an important note regarding frame rates. Monster Hunter World features a wide variety of environments, each with its own set of assets and as such the frame rate could vary quite drastically, specially when you are playing in Prioritize Frame Rate mode. We believe that Prioritize Resolution is the best way to play Monster Hunter World. It gives a great balance of increased pixel count, a stable frame rate and decent graphical parameters.

Monster Hunter World, in many ways, is a technical achievement on both the PS4 Pro and Xbox One X. It goes beyond the usual two graphical modes on the iterative consoles and gives fans more ways to play their games the way they want. But yes, let’s not forget it lacks a bit of polish, has some frame rate issues and there are numerous bugs and glitches. But don’t let any of these issues keep you away from what is this year’s most exciting, action packed and fun filled game.