Who would have known there was a beauty in the bug?

Morphopolis is a game of very few words and the most obvious of topics surrounding the game, will undoubtedly be “Can videogames be classified as art?” While this largely remains a subject of debate between those who actually create art and those who think they understand the medium due to one or two trips to an art gallery. Although the distinctive line is that of videogames being the purpose for entertainment, and art holding an emotional presence within the artist and an intentional reaction within the viewer. One thing that immediately stands out is the visual presentation that Morphopolis gives its audience, for those who are willing to give it a chance.

Bordering the graphical lines of games such as Journey, Dishonored, and Flower, Morphopolis seeks to appeal itself to the gamer through its simplistic and nontraditional takes on gameplay, and first and foremost through its visual style. With what could only be described as a living painting Morphopolis uses nature to its advantage in the hopes of creating an emotional resonance in cooperation alongside its music.

Littered with a variety of insects, plant life, and other microorganisms I wouldn’t attempt to try and name. A static background combined with minimal animations from creatures in the foreground, deliver a feeling of peacefulness and serenity that makes way for a peaceful session of gaming, rather than the time killing ideology that Android based games are known for. 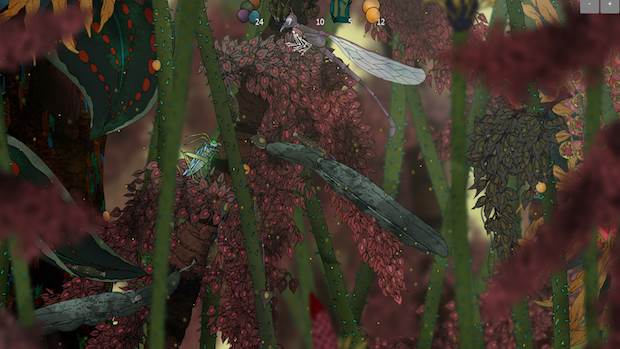 "Using not only its peaceful and mellow music and sharp visual fidelity, Morphopolis carries an extensive array of bold and brightly lit colours to aid in its creation of ambiance and harmony. This is the game that's so well done in the mood it attempts to invoke that the beauty of it alone could send a baby to sleep."

Morphopolis is a game about insects, and more times than none they’re essentially portrayed as disgust and dislike. The general populous can agree that creepy crawlies are…well they’re gross, and they would rather be stepped on than seen with a shed of beauty. But that’s essentially what this game does, it succeeds at changing the perspective of something and shows you the beauty of what you would generally fail to notice. Using not only its peaceful and mellow music and sharp visual fidelity, Morphopolis carries an extensive array of bold and brightly lit colours to aid in its creation of ambiance and harmony. This is the game that’s so well done in the mood it attempts to invoke that the beauty of it alone could send a baby to sleep.

Giving the player nothing more than a title screen and a level selection option consisting of nothing but numbers, the approach to minimalism is obvious here. This is also seen within the main game as it gives no options for graphical tuning, audio sliders, or gameplay difficulty. You’re given three choices from here on out, play, quit to the main menu, or touch the hint icon. The gameplay approach is designed this way to keep you going in the hopes that you don’t actually stop playing.

While it may not be an addictive experience it’s certainly one worth experiencing which is an unexplainable one in itself. As beautiful as the game is it’s certainly an acquired taste, no bug puns intended. The game requires a lot of patience and a lot of hours, as each element of it will have you distracted by simply admiring it as you try to progress. Morphopolis is more of an interactive puzzle than it is a game, and this can be thought of in the sense that a game presents a challenge through feedback. While a puzzle creates a goal through the use of critical thinking.

This is where the design of being minimal in all of its aspects and only one action within its control scheme works. The goal of the game is simple, each level puts you in the life of a bug and like all human perspectives on bugs the focus of the subject is survival. Playing as a caterpillar, grasshopper, and various other creepy crawlies you must scavenge enough food to aid in your survival, as a requirement for completing the level.

At certain stages within the level you must overcome a major puzzle that uses interaction with other creatures in nature’s miniature world. Puzzle elements within the life of an insect would have never made sense of before this game came along. But the way in which it demonstrates these things really makes you think, as well as leaving you curious into the way an insect lives out its life. As said before the gameplay works on a requirement of scavenging supplies and survival. Using these sources of food and plant life as tools for puzzles, and bribes for other creatures in the world, most noticeably bigger ones. 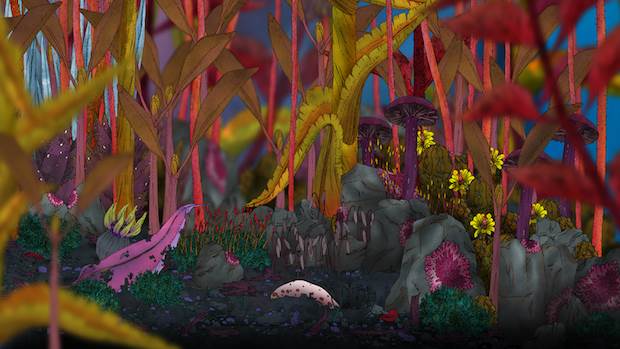 "One other thing that degrades its attractiveness lies in the most unethical of systems, and that is the loading screen. Taking near forever to load up the next level is only rewarded by its pleasing visuals, and if you can sit through this infinite of a loading bar it's worth it."

Each stage introduces you to the life of a new creature along with an astonishingly raised difficultly level within its puzzle. Due to its emphasis on keeping things simplistic the game doesn’t provide any real hints or any tutorials for that matter in assisting the player. Hand-holding is non existent here and the hint system that is in place only points out your objective leaving you to figure out what to do, with what you have.

Touching and sliding your insect around the branches and leaves into the colourful and immersive world of nature, the screen opens up each section of the game’s environment when needed so by the player. The major puzzle sections of the game although wrapped in beauty can feel massively off putting at times, and the lack of visual cues and player assistance can become somewhat of an irritation.

Those who do become engaged in the game’s amazement will notice the odd turnaround in difficulty that runs through its levels. Whether you enjoy a good puzzle now and then or you’re an avid lover of puzzles, the need for a more detailed direction or assistance in certain stages is highly noticeable. Morphopolis uses two main components as its core attractions, visuals and puzzles.

But the balancing between the two seems to work on a basis of a lackluster hint system coupled by its odd difficulty spikes, being weighed out by its pretty aesthetics. One other thing that degrades its attractiveness lies in the most unethical of systems, and that is the loading screen. Taking near forever to load up the next level is only rewarded by its pleasing visuals, and if you can sit through this infinite of a loading bar it’s worth it.

Wonderfully immersive and an intricate take on gameplay makes this an experience worth engaging in.

An adjustment to the puzzle system and a more helpful hint system is needed.

A loading screen that hopes you'll stick around and an underdeveloped hint system may prove troublesome. But it's not enough to pull down such a marvellous and emotionally engaging experience.

A copy of this game was provided by developer/publisher for review purposes. Click here to know more about our Reviews Policy.
Tagged With: android, iOS, micro macro games, morphopolis, others, pc