MXGP 2020 almost never rises above its predecessor, making it a hard sell for most.

Typically, follow-up games are expected to improve on their predecessors in every way. At the very least, a follow-up should be on-par with the game it’s succeeding. MXGP 2020 is not totally without improvements over last year’s game, but those improvements are so few and far between that it’s hard to recommend the game to anyone outside of the most hardcore Motocross enthusiasts out there.

Just as you should expect at this point, MXGP has several modes and a reasonable amount of customization. Neither feel particularly meaty, but they do meet the bare minimum with a Career mode, Grand Prix, time attack, multiplayer, and a championship mode which is basically a long string of races that you can arrange to just keep racing and earning XP without stopping. It’s enough modes, but in 2020 it does feel pretty mediocre. The customization more-or-less mirrors this attitude with enough preset colors to basically get where you want your character to be, but no custom colors or anything else that would really bring it up to a remarkable level.

"MXGP 2020 is not totally without improvements over last year’s game, but those improvements are so few and far between that it’s hard to recommend the game to anyone outside of the most hardcore Motocross enthusiasts out there."

I also found it a bit annoying that the game didn’t want to remember my custom rider twice in a row after closing out the game and bringing it back up. It’s something that I imagine will be fixed, but it is sort of inexcusable at the same time. The amount of gear to choose from also isn’t bad, but again, you’re not going to be blown away by the options here. There’s a good selection of bikes and parts. Everything from Husqvarna to Yamaha and even some smaller brands are represented here, so credit where it’s due. The track editor doesn’t go as far as many track editors in other racing games, like say, DiRT 5, have gone, but it’s enough to serve as a worthy diversion and does add to the depth of the game enough to be mentioned.

Overall, if you enjoyed MXGP 2019, you will feel some familiarity with 2020 when you actually hit the tracks. The physics are similar and the track designs follow a familiar philosophy but with some improvements. The problem is that these differences range from the demonstrably worse to the marginally improved. MXGP 2020’s physics aren’t objectively better, they’re just a little different. Allowing you to do whips and have more control in the air is a nice touch, but it doesn’t contribute much to the races from a functional standpoint. Some elements of racing actually feel worse, like corning being a bit more slippery than it probably should be. It’s not hard to get used to but it will lead to some unnecessary slide-outs from time to time.

The game’s efforts to correct you are also inconsistent. Sometimes going off the track is rigorously prevented, with even a slight slip over the edge resulting in a track reset and a complete loss of your momentum, while other times, you’ll completely and brazenly cut through a corner and think to yourself, “man, how did I get away with that?”. The slightest bump of a sign or a fence can also lead to the game treating it like it like some sort of massive wipeout, but other times, it doesn’t. If you play well enough and don’t make any mistakes, you won’t really notice any of this but it would have been nice to see a more consistent implementation of the rules… whatever they are. There is also a rewind mode that you can use to fix any of your errors as well, so depending on how much you like to rely on such things, you may not care at all about how the game handles accidents and cheating at all. 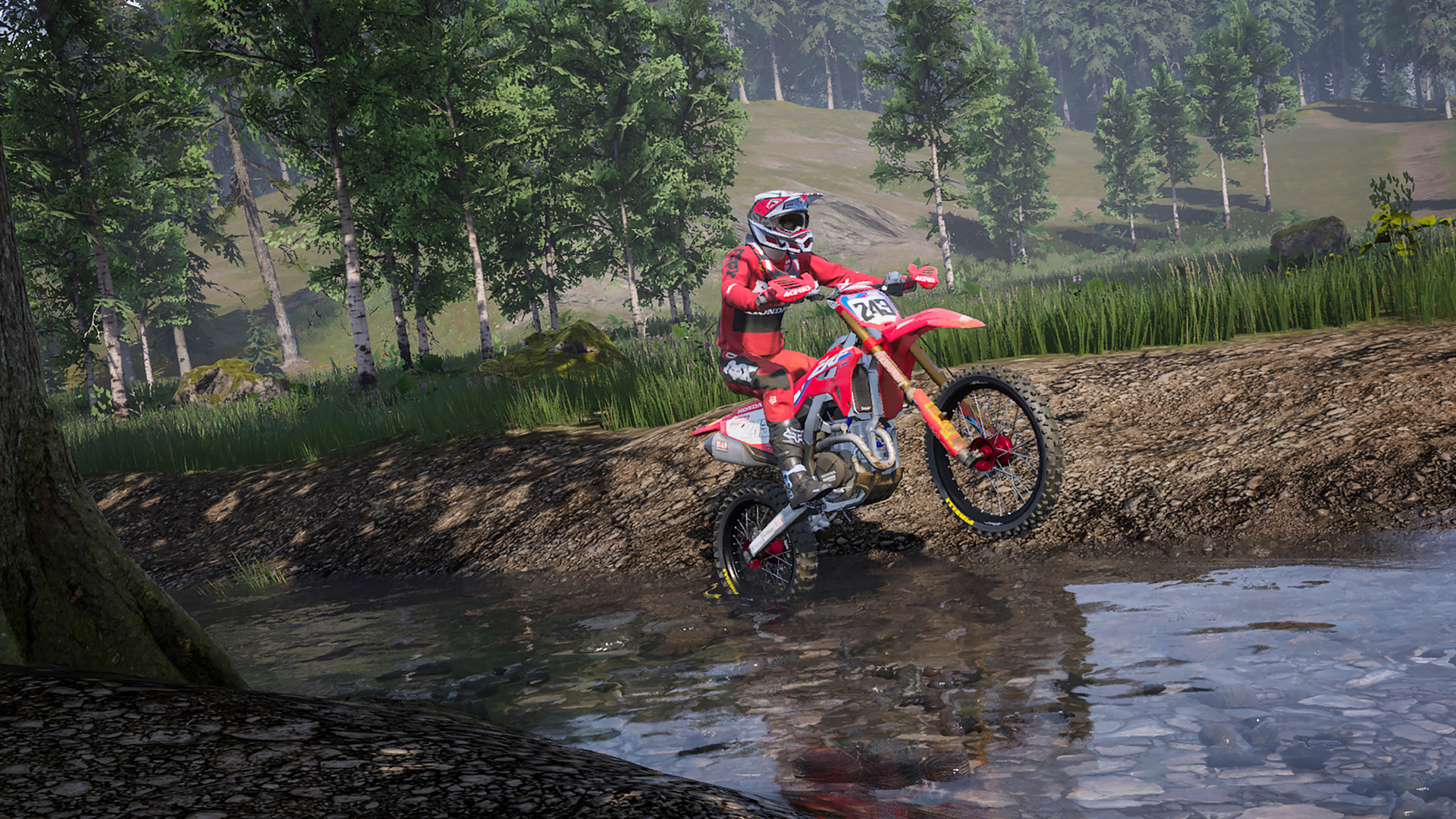 "Overall, if you enjoyed MXGP 2019, you will feel some familiarity with 2020 when you actually hit the tracks. The physics are similar and the track designs follow a familiar philosophy but with some improvements. The problem is that these differences range from the demonstrably worse to the marginally improved."

Thankfully, the moment-to-moment racing isn’t bad at all. Momentum, speed, and traction all feel like they matter and have to be constantly managed. The tracks often have multiple, deliberately-perforated inside lines you can take that have different topography which can introduce a bit more realistic strategy than last year’s outing. This, coupled with more verticality than last year’s game do make this game’s various tracks feel like a nice improvement and probably the game’s strongest single element, with wetter sections of dirt clearly affecting your traction differently than dryer sections, and a whole host of other wrinkles in the ground physics that make you pay close attention to what exactly you’re racing on.

Visually the game isn’t going to blow your socks off. In fact, it’s not even going to tug at your socks at all. The game looks pretty good when everything is moving but when things stop or slow down you will notice some muddy textures here and there, and I’m not just talking about the dirt. When back wheels kick up dirt, that flying-dirt-animation in particular looks kind of bad, with it just looking flat and not connected to the ground at all. Shadows and lighting are all fairly good though and I rarely noticed anything weird in those departments. I also think the lighting engine really shines here when the weather effects start to kick in. Puddles of water in the mud glisten. Mud and rain caking up on the screen looks good and immersive. It can go a bit past the point of obscuring your vision than I would like at times, but it looks good nonetheless.

Unfortunately, once all of these effects are firing on all cylinders, the frame-rate can start to dip on the PS4 Pro, making the 30 frames it’s aiming at about as stable as your bike sliding through a muddy turn. Big frame dips aren’t too common, but given the mediocre level of detail on display here, you’d think it would be all but eliminated at only 30 frames per second. I have it on good authority the PC version does perform better, and I assume so will the PS5 version when it launches later in January, but I was generally not impressed with the optimization on the PS4 pro at any time. 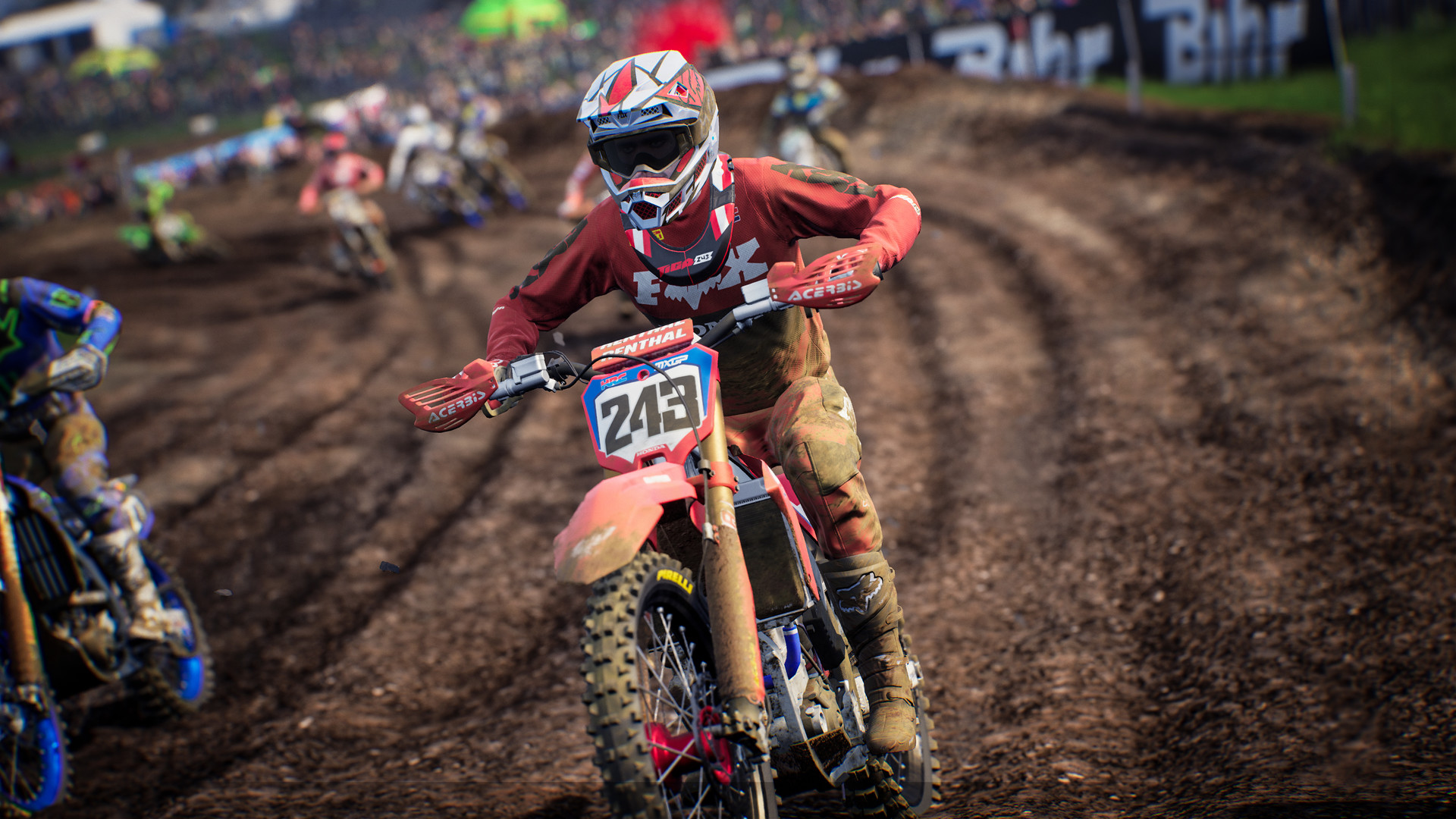 "Thankfully, the moment-to-moment racing isn’t bad at all. Momentum, speed, and traction all feel like they matter and have to be constantly managed."

The game’s audio department fairs pretty well most of the time. Bike sounds feel accurate as buzzing motors all around you struggle to overcome various hills and bumps, and landing after a big jump has a nice crunch to it that adds to the satisfaction while also not overwhelming your speakers. What little music there is in the game is forgettable but serviceable for what the game is.

MXGP is a competently made motocross game. If it were in a vacuum, where nobody would compare it to MXGP 2019 or MXGP 3, and it wasn’t being held to the standards of other 2020 games generally, most of its flaws would feel forgivable, but given that the game is not in a vacuum and should absolutely be compared to its predecessors as well as it’s contemporaries, it’s hard to ignore the fact that it comes up short in almost every way. While it never quite crosses the line into “bad game” territory, it also seems unable to cross the line into “great game” territory as well, making it feel mediocre most of the time. Some bright spots in the track design and overall feel of the racing do keep it from feeling totally average, but not by much. At the end of the day, MXGP is a very vanilla motocross game. If you’re a fan of vanilla, then you’ll be right at home, but I struggle to give it any more than a lukewarm recommendation to anybody else.

Some fun tweaks to the physics and good track designs make MXGP’s races feel reasonably fun most of the time.

A barebones selection of modes, mediocre customization, and lackluster performance on seventh gen consoles make MXGP 2020 a pretty tough sell for most.

Final Verdict:
FAIR
For every time MXGP 2020 races forward, it seems to slip backwards somewhere else. Depending on what you want out of a motocross game, this could either be a cautious recommendation or a hard pass, neither of which are likely to impress you.
A copy of this game was provided by Developer/Publisher/Distributor/PR Agency for review purposes. Click here to know more about our Reviews Policy.