It has been rumored for a while now that the next entry to the Halo franchise – Halo: Reach will be using Microsoft’s Natal.

But Bungie has finally confirmed that Halo: Reach will not use Natal, so the rumors of Reach using Natal are false.

“Reach is NOT a Natal title and is being developed expressly with the traditional Xbox 360 controller in mind.” 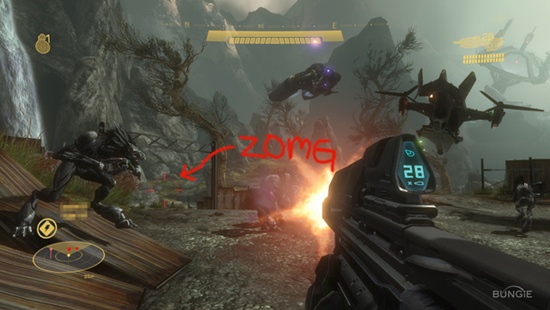 The original reason for this rumor was an in-game screenshot from Reach that has  the crosshair being very similar to crosshairs on FPS’s on the Wii, meaning the gun is straight forward yet the corsshair is way off to the left, which caused a lot of people to think that the screenshot was taken while using Natal with Reach.

But Bungie said that this is only a bug (Bug #15163) and that it’s the cause for the crosshair being like that.

“Sorry folks, you won’t be perpetually leaning to the left nor will you be navigating multiple cross-hairs for various purposes. Truth be told, it’s just a good ole fashioned bug. Bug #15163 to be exact. Here’s the entry as found in our RAID database”

So i guess we can call this myth BUSTED.