Strap on your seat belts.. oh wait there are none alright then just grab onto your balls and get ready for an intense thrill ride.  Nail’d is a fast paced Motocross/ATV Racing game that will have you on the edge of your seat.  There have been a lot of games in this genre in the past but Nail’d seems to stand out because of its complete disregard of real time physics.  This is a good thing in my opinion because if I wanted to really ride Motocross I would but this is a video game and its got super boosts as well a very little gravity.  It seems Nail’d has set out to do what I feel other Motocross games should have done already and are a little late on the boat ride.  There was Pure that was released a little while ago but this game differs in the fact that that physics are thrown out the window and the customization is not as extensive.

Nail’d has a whole bunch of modes including customizable ones where you can create races/events online and offline where you can have infinite boost, no collision with other players, among others that are suitably named “Mutators”.  Without mutators you must gradually build up your boost meter, while doing special feats or driving/flying though hoops of fire will give you a boat load of boost.  You can ram other drivers into trees and other objects getting them “nail’d” which cause a quick re-spawn.  Don’t worry though you will get you fair share of getting “nail’d” even without another vehicle ram you.  You can choose between an ATV or a Dirtbike and as you play the campaign which is essentially a Tournament, you unlock vehicle parts that alter the way your ride will drive as well as unlocking custom paint jobs.  You upgraded bike can be taken online to show off or just kick some ones ass in a race. 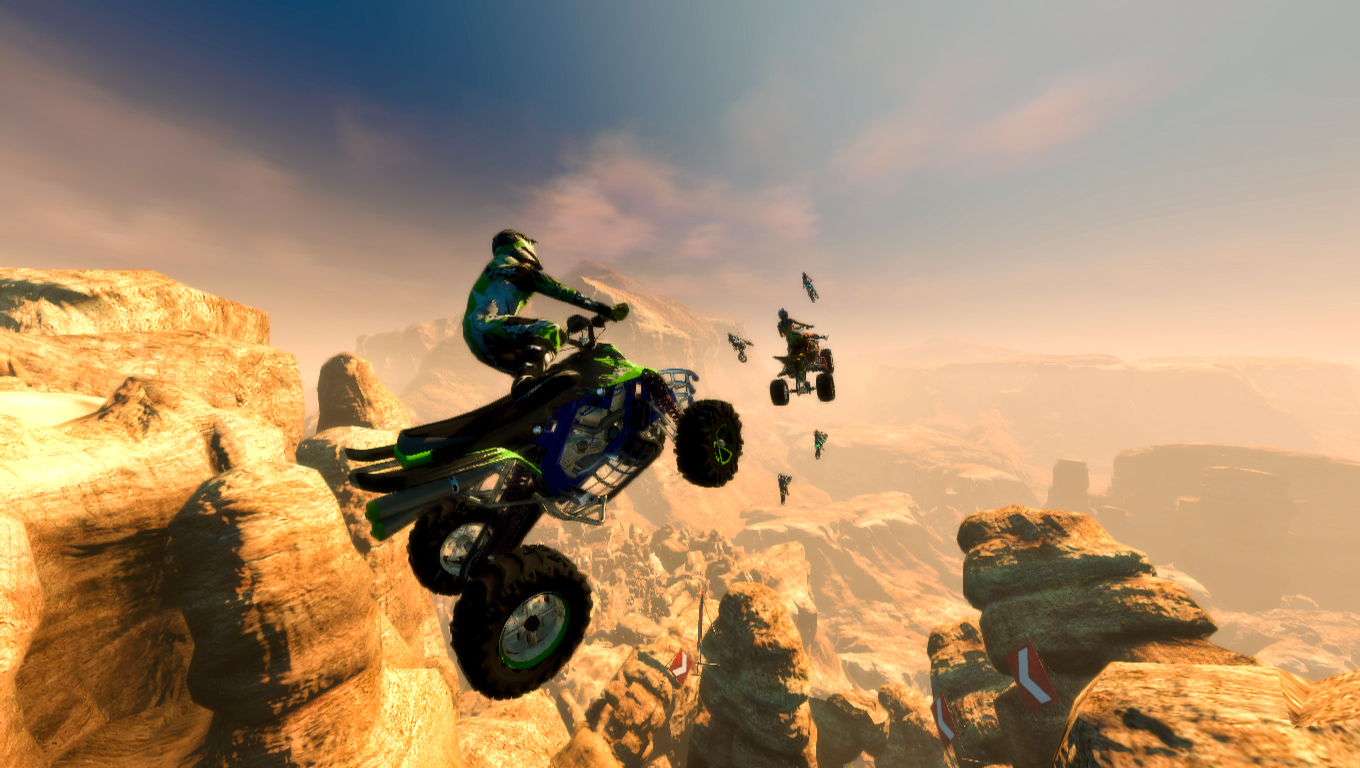 One of the most awesome things I though about the game were the tracks themselves.  You can be going straight up, straight down, be riding along side or even on top of moving trains.  There are points where you catch so much air that you feel like your pretty much flying as you pass by a blimp, hot air balloon or be gliding under a helicopter.  There are so many different routes to take on these tracks as you drive on rooftops, through tunnels and hit jump constantly.  You have all the time in the world to try out tricks while your airborne for so long but there really aren’t any real tricks to do.  Instead there is just merely feats which make this more strictly an arcade style racing game. While doing all of the for-mentioned things in the game you still feel like you have full control even when you are airborne, which is not like most other games of this genre.  The unrealistic sense of the game makes it that much more fun.

There are plenty of modes to play online and offline.  Tournament mode is basically the campaign and the highlight of the game as you work your way through different races on different tracks as they progressively get harder.  They are mostly races but some of the event are stunt related where you will have to preform the most feats to win the race.  The Go Off-Road Mode lets you play Time Attack, Custom Tournament and Quick Event where you can also customize the race as you want by choosing the track, mutators, how many players and what type of race.  The game modes are Simple Race, Time Challenge, Stunt Challenge, or Detonator Mode.  All are self explanatory except for Detonator Mode which is a lot of fun.  It is like hot potato with a bomb strapped to your back and you’ll have to preform a stunt/feat to hand the bomb off to someone else before it detonates cause you to re-spawn.  This mode is included upon enter a code when you buy the game new along with 4 other music tracks.  All these modes can be played online as well as Events that consists ofmultiple races with 2-12 players. 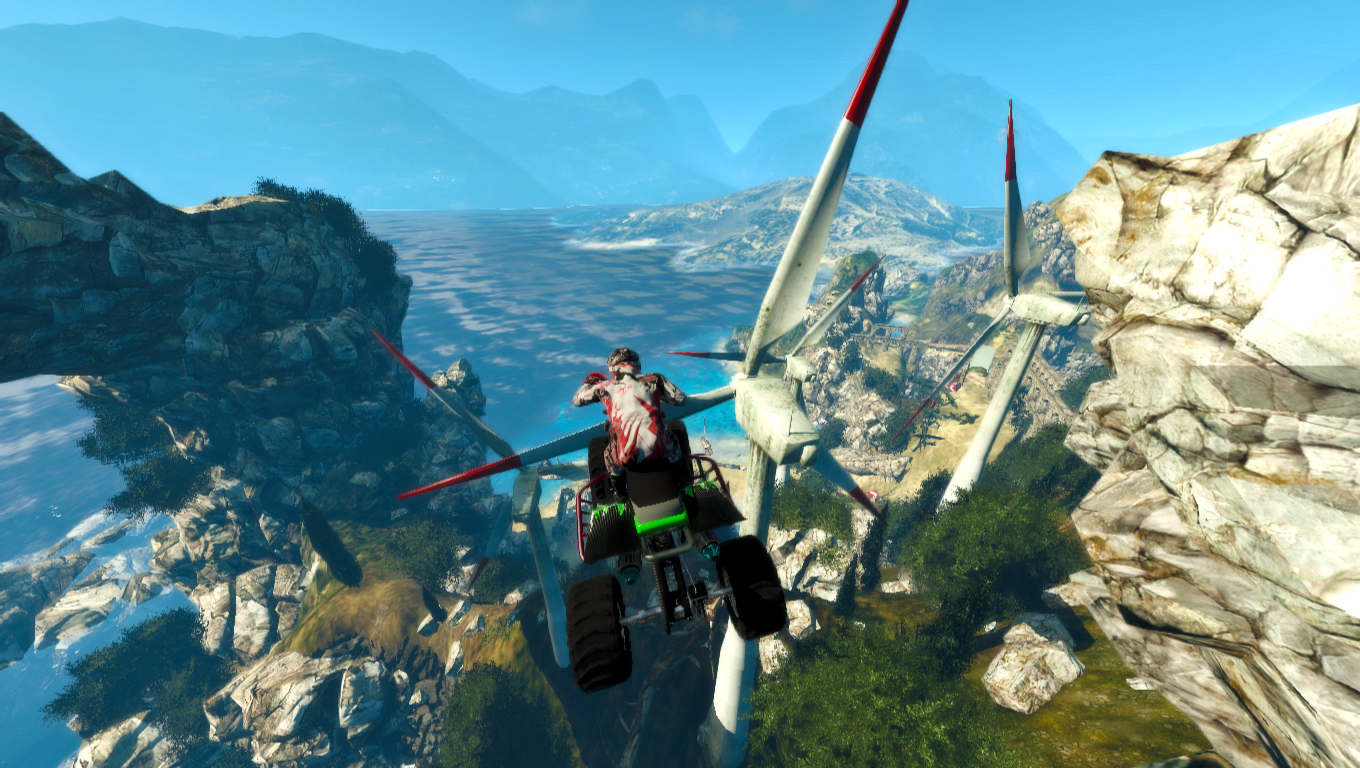 Nail’d also has a good grind/metal soundtrack with songs from Slipknot, Rise Against and Queens of the Stone Age among others to keep you pumped as you are flying through the air at a thousand miles per hour knowing your going to land perfectly where you want to.  It was a bit hard to get into an online match after the game was officially released… well maybe that is an exaggeration,  it felt like I was the only person playing this game as I could not find an online race for the life of me.  This could be due to the fact that nail’d is following  the Call of Duty: Black Ops, Assassin’s Creed Brotherhood and Halo Reach releases.  But I think the game is great and I wouldn’t have been able to it make through the main tournament without my white-knuckle cream thanks to Aubrey.

Good soundtrack, and just good old fun racing. With its fast paced gameplay your sure to find some enjoyment in just racing with nearly no consequences.

Not much of a community playing the game online but it still currently has not been released Internationally yet. The game can get repetitive and customization is limited.

A blood-pumping Motocross arcade style game that defies physics and gravity to make one fun racing game with customizable vehicles. For the Xbox 360, PS3 and PC.

A copy of this game was provided by developer/publisher for review purposes. Click here to know more about our Reviews Policy.
Tagged With: nail'd, pc, ps3, South Peak Interactive, SouthPeak, xbox 360