Posted By Jordan Garland | On 15th, May. 2012 Under News | Follow This Author @MostUnfurrowed 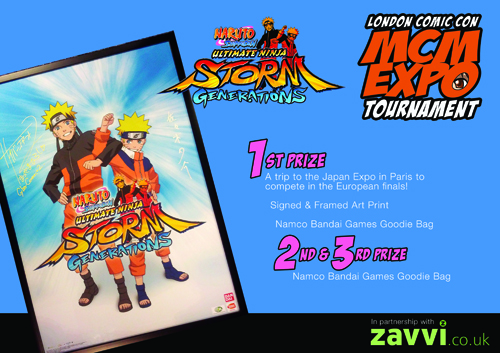 Today Namco Bandai announced that they are looking for the UK’s best Naruto Shippuden: Ultimate Ninja Storm Generations player, to be decided at this month’s MCM Expo in London.

The coveted prize will be contested by eight individuals, selected on a first-come, first-serve basis, in a knock-out tournament on 26 May on Stage B at 3pm, fights lasting for 99 seconds.

Not only will the winner of the tournament win the best prize of all, bragging rights, but also a trip to the Japan Expo in Paris on 5 July to compete in the European finals. Even better still, a print signed by series producer Hiroshi Matsuyama and a Namco Bandai goodie bag.

In order to register for the competition, entrants are asked to go to the MCM Expo website and register by 23 May. Winning entrants will be notified by email.