Let’s get a little broken together, dear reader. Forget about all the amazing games 2017 has given us like Destiny 2, Horizon and Zelda, and just get real sad. Because NASCAR Heat 2 was never going to be among them.

Last year’s NASCAR Heat Evolution was a game I found to be of little redeeming value, with visual fidelity that didn’t even belong on the Playstation 3, the worst royalty free light rock they could find and an inability to even make the main mechanic of driving, something gaming has been doing since we could make stuff scroll, feel even remotely good. 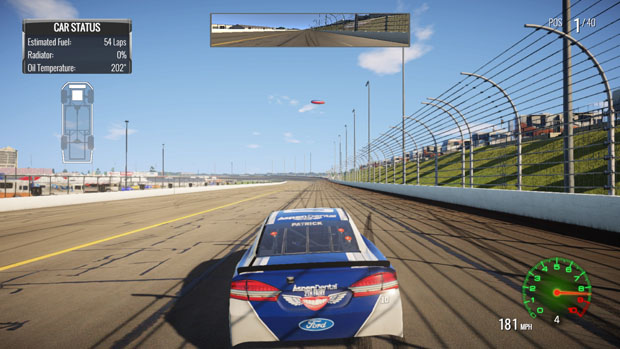 "What begins as “hey maybe come in top 25 whatever” quickly escalates to needing a win, but that doesn’t always feel in your control."

Did Monster Games do any better this time? Well in so many words, not really. The modes on offer are better differentiated this go, where as last year they were all takes on the same gameplay loop, but in all other areas NASCAR Heat 2 stands as stagnant as the cardboard crowds.

Delivering better first impressions than last time, while still on an obviously shoestring budget, much of the presentation outside of the actual racing in Heat 2 involves stock historical footage and a couple of NASCAR elites talking to a camera to exposit dialog in the reimagined career mode. Instead of pouring resources into a character editor, the game simply suggests that you are the up and coming racer on the circuit, scouted by talent and working your way up from being a random hotseat driver through two smaller leagues to make it big time with the Monster Energy NASCAR series.

The change in structure dramatically improves the tone and pace of the career mode this time around, giving some tangible feeling of a journey, while offering smaller goals early on in the career to be some baby steps toward the truly herculean effort it is fighting the mechanics to actually win one of these races. What begins as “hey maybe come in top 25 whatever” quickly escalates to needing a win, but that doesn’t always feel in your control. 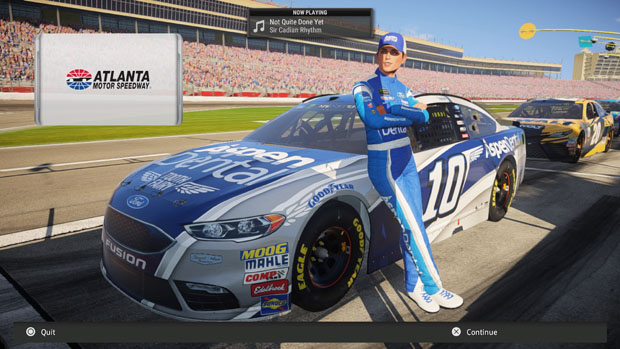 "Challenge mode offer the most interesting, varied and commented take on the gameplay, putting you into classic situations from famous races and asking you to play out the results of those in a mission format."

Driving itself feels just as lacklustre as before, with flawed physics that don’t feel anything like actual driving, or that you’re in control. Stiff steering keeps you locked into the rote left turns that the racing style demands, without giving you much leeway to maneuver around the pack and into a favourable position. Trying to use the brake to gain some control doesn’t result in the dramatic spin outs of the previous game anymore, but still slows you far too much and too fast to be useful or feel realistic, and the damage systems still neither physically show on the painfully mediocre car models or impact play very meaningfully.

Career is a large mode, but there is actually some different modes on offer with variations on the NASCAR gameplay loop. Challenge mode offer the most interesting, varied and commented take on the gameplay, putting you into classic situations from famous races and asking you to play out the results of those in a mission format. These can vary from asking you to maintain a lead on no fuel and win in the last two laps, to surviving a huge pile up to still have a decent position. The funky physics, especially where collisions are involved, don’t always give these segments the kind of impact you might expect, but the variation on the gameplay loop is nice.

Unfortunately the nature of the beast is still not going to win any new fans, and there’s only so much variety that can be brought into NASCAR. Tracks might ever so slightly vary in layout but by design they never feel like sweeping changes. They had the chance to introduce some degree of environment change with the introduction of dirt tracks, which if I’m to believe Pixar should drastically change how you race. Unfortunately this too turns out to be another similar arena with cardboard cutouts crowds and product placement. 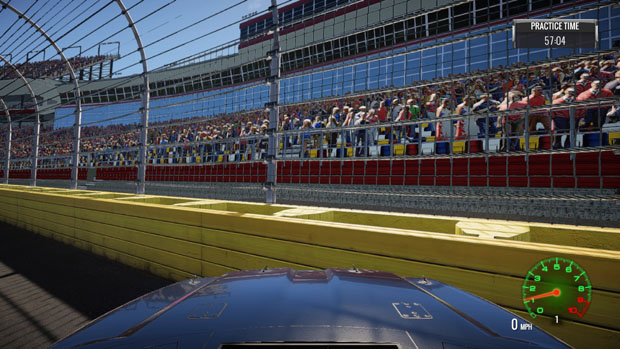 "Heat 2 is hardly the first racing game to be guilty of having a few seams when you slow down and look, but the crowds watching were of a super low quality 2D sprite."

The visual quality continues to be laughable in a world rapidly moving toward 4K gaming. Car models now have basic interiors to facilitate multiple viewpoints, but the textures of the cars still look horrendously low quality. Lighting looks super basic and doesn’t really bring you into the game. At the very least, the sound design is still great and feels like the simulation this game is trying to be, with powerful engine sounds and the squeals of tires backed by pit chatter trying to clue you into openings to pass. Heat 2 is hardly the first racing game to be guilty of having a few seams when you slow down and look, but the crowds watching were of a super low quality 2D sprite.

I’m forced to come to the same conclusion here that I came to in last year’s review, that this is the kind of game that has no cares to give about finding an audience outside those who already care about NASCAR. A more solid career mode and challenges do help give the modes meaning but poor controls, visuals, music and game feel hold it back from attracting anyone who isn’t already into NASCAR

The career and mission modes have been reworked to be more meaningful and provide different gameplay loops. Audio design remains strong.

Visuals are still weak next to other racing games, controls feel too stiff and opportunities to vary the gameplay with different track materials are ignored.

Neither the updated career mode, challenge mode can save this game from the fact it really can’t offer much to someone wanting a little more involvement from their gameplay.

A copy of this game was provided by developer/publisher for review purposes. Click here to know more about our Reviews Policy.
Tagged With: 704games, Monster Games, nascar heat 2, pc, ps4, Xbox One