There’s been no shortage of criticism surrounding many annualized sports franchises in the past few years, from games like Madden becoming increasingly controversial to the WWE 2K series taking at least a year off, and the NBA 2K franchise is no different. Especially with 2K21, the annual changes felt less like crucial additions that made the game that much better and more like lateral changes, replacing one MyCareer or shot meter for another with little in the way of tangible improvements. With 2K22, Visual Concepts has upped its game a bit more than in past years with a host of very noticeable improvements primed for the first native release for the next-gen consoles, even though it doesn’t hit on every attempt. Some of the changes to structure, especially in MyCareer, feel forced, but all in all, gameplay feels more refined than ever and some broad streamlining has made the game feel more cohesive. And when it comes down to it, 2K22 hasn’t been topped in on-the-court gameplay or presentation, so it’s still an easy buy for anyone who knows what they’re getting into.

The most substantial mode changes from last year appear in MyCareer, which is not only revamped with its annual new story but completely redesigned in structure. The story this year involves your MyPlayer, uncreatively called “MP,” who isn’t a normal rising star in the basketball world. Instead, he’s a social media sensation with hundreds of thousands of followers who has only played organized basketball for a few years before deciding whether he wants to go to college or play in the G-League Ignite League. I chose the college path to ultimately play in the NCAA Tournament, where my 8th seed UConn Huskies lost in the opening round, after which I decided to enter the NBA Draft. There is a good amount of variety even in these opening choices, as you can decide to go back to school or skip it entirely before getting drafted, and there’s a full-fledged story being told both before the draft and once you enter the NBA with some decent voice acting for the series and what feels like many more cutscenes than usual, including some interesting cameos.

"With 2K22, Visual Concepts has upped its game a bit more than in past years with a host of very noticeable improvements primed for the first native release for the next-gen consoles, even though it doesn’t hit on every attempt."

Unfortunately, the story in a lot of places feels even more contrived and unrealistic than usual. There’s a point soon after you’re drafted that you sign with an agency and your first decision is whether to complain about your playing time, which, though you can technically choose not to do, the game almost bullies you into doing. Keep in mind, my MP was drafted in the 2nd round and was getting about 10 minutes a game out the gate, so you’d think he’d be ecstatic about his playing time for a 60-something overall. There are a few of these storylines that border on the absurd, and the story takes itself way too seriously to be self-aware about it, though it’s easy to ignore or look past if you’re just trying to play some basketball.

Where previous 2Ks have had their own independent Neighborhood modes where you can play pickup against other players and wander, 2K22 bakes a brand-new Neighborhood or City into MyCareer for past-gen and current-gen consoles, respectively. I played on Xbox Series X and experienced the City, which turns MyCareer into an effective open-world basketball game, where you can play just the critical path or run around focusing on non-basketball activities like music or fashion or playing pickup against other real players. I didn’t find too much enjoyment in the open world, which doesn’t capitalize on the strengths of what open worlds allow and instead causes a lot of tedious running or, bafflingly, skateboarding from point to point without much to do in the meantime if you don’t want to play a pickup game. There are some side quests that you can complete, but I never found much motivation or reward in doing so and ultimately ignored a lot of them. With that said, I’m interested to see how Visual Concepts can build on this idea in future installments, but for now I found myself ignoring a lot of the extracurriculars and wishing we were back in the linear structure of past games.

Gameplay on the court seems to have gotten a similar level of attention, and it pays off in most ways, as this is the smoothest, most fluid and dynamic gameplay 2K has ever had. Defending feels tighter and more precise to give better defenders more of an edge, though it’s still just as easy to accidentally press too hard to one side and create an open lane to the basket. On the offensive side of the ball, everything feels a touch quicker and more responsive. There is a noticeable number of new animations that make every stepback or dribble move feel somewhat different from the last and easily transition between each other. As usual, the shot meter has changed and this time is more dynamic to increase or decrease the size of the optimal release point depending on stamina, skill, and coverage. Also as usual is that it takes a while to get used to, especially since it feels less defined and harder to see where the optimal point is, but eventually I began to get the hang of it. A change I like less is the inclusion of timing for dunks and alley-oops, which caused me to miss more than my fair share of open shots. It feels like an unnecessary inclusion that makes a seemingly easy part of the game much more difficult and brings in a much smaller margin for error that gives a much higher risk for something that rarely happens in real life. 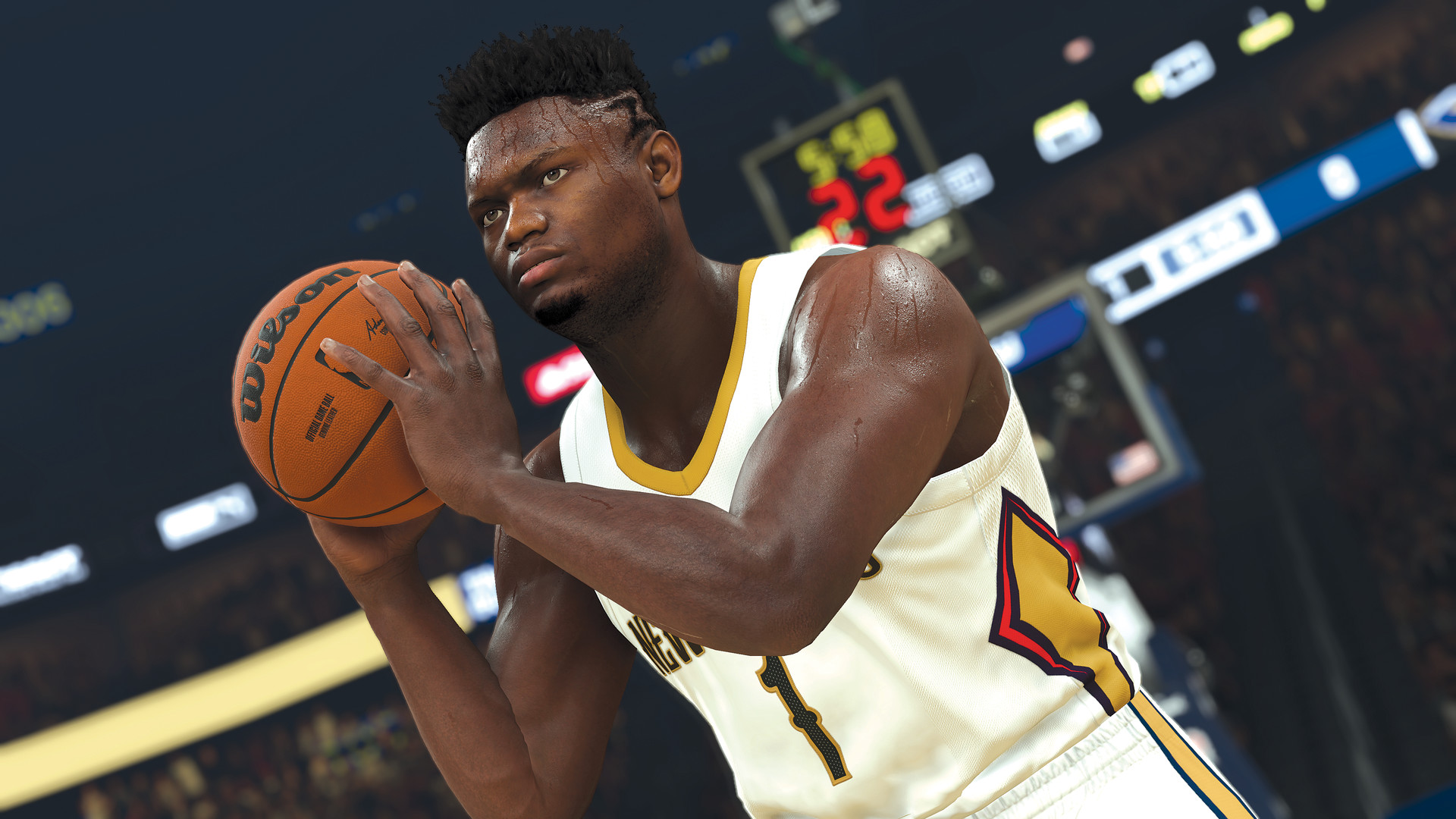 "While the integration of the City into MyCareer isn’t executed perfectly, I appreciate the innovation and the attempt to create something more exciting than a simple basketball story."

To correspond to the new consoles, the game’s presentation has gotten both an improvement and a bit of a facelift in some areas. Character models look as crisp and lifelike as ever, including both the real stars and the fictional ones in the story. Load times are significantly improved despite some framerate drops within loading screens, and it’s as painless as ever to navigate through menus, which have been revamped in a lot of areas to consolidate some game modes and make things look a little sleeker and streamlined. Other modes, though, are disappointingly unchanged from past years when compared to the huge revamping of MyCareer. There are Seasons again that affect the City or Neighborhood in MyCareer as well as MyTeam but are effectively the same idea as they were when introduced last year, though luckily it’s mostly free of microtransactions. MyTeam itself has a couple of upgrades, such as an online Draft capability, but is overall a very similar experience to previous years, and it’s disappointing that there’s no cross-save between console families and that the microtransactions are as prevalent as ever. And while the menu changes are enough to make other modes like Blacktop and MyNBA feel fresh for a bit, underneath the hood they’re the same experience as before with few changes to their formulas.

It’s probably better to think of NBA 2K22 as a revamp of the series rather than either a fully new experience or a simple roster update. The changes it does make to both its gameplay and MyCareer mode are substantial and offer at the very least some new and interesting ideas. While the integration of the City into MyCareer isn’t executed perfectly, I appreciate the innovation and the attempt to create something more exciting than a simple basketball story. And on the court, where it matters most, gameplay feels as smooth and satisfying as ever, even if I do miss the occasional breakaway dunk. 2K is still a world-class basketball sim that offers some of the best sports gameplay the industry has to offer, and while not everything new is on target, 2K22 brings out some new tricks that complement its best-in-class balling.

Gameplay is as smooth as ever; Lots of new and improved animations; Interesting MyCareer innovation; Beautiful visuals.

Final Verdict:
GOOD
NBA 2K22 makes some appreciated improvements to on-the-court gameplay and tries some refreshing, if not entirely successful innovations in MyCareer that make this year’s version feel like a bit more than just a roster update.
A copy of this game was provided by Developer/Publisher/Distributor/PR Agency for review purposes. Click here to know more about our Reviews Policy.