NBA Playgrounds Review – Not Much To Jam To

Everybody get up, it’s time to slam this game. We got a real jam going down.

Posted By Alex Jackson | On 24th, May. 2017 Under Article, Reviews | Follow This Author @teh_jackson

While it tries to fill the void left by such irreverent series like NBA Jam and NBA Street, the flash and pizazz of NBA Playgrounds doesn’t hide the repetitive gameplay and lame presentation for very long, the quickly worn off novelty leaving a pretty shallow, frustrating game in its wake.

NBA Playgrounds initially fulfills its promise of a fun pick up game of B-Ball that doesn’t take itself too seriously, with fun presentational quirks like unlocking new players from the NBA’s 30 teams through opening packs of cards and the homestyle jams that accentuate the menus and gameplay. 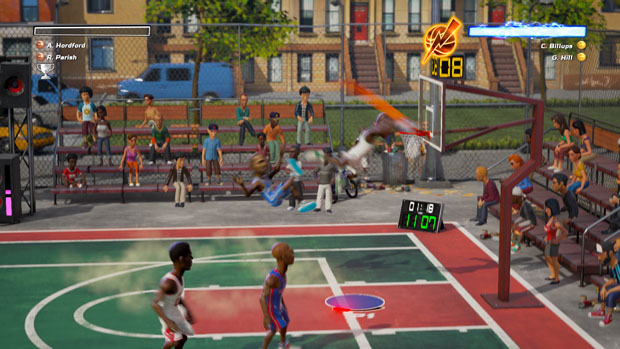 "You can throw down in a quick Exhibition game for some practice to wrap your fingers around the complex control scheme, but for the most part, you’ll be trying your hand at the tournament mode"

You better be into the two-on two skirmishes the game offers, because that’s the only game type throughout the single player and multiplayer modes. You can throw down in a quick Exhibition game for some practice to wrap your fingers around the complex control scheme, but for the most part, you’ll be trying your hand at the tournament mode, working your way through three game tournaments around the world, with the skins of real world cities like London and Paris. If you can manage to beat the three minute matches before the finals on any given city, you’ll earn the privilege of playing in the five-minute championship.

Win or lose, you’ll gain experience to grow a largely meaningless player level that gifts out new player packs as you go. Using ballers that you favour helps improve their stats by a little bit, but it never feels like it makes much difference. Gameplay is a quick back and forth between the two teams, and a lot of the offence and defence in the game comes down to timing. When you release a shot to watch it sail right into the net, the moment to attempt some game changing play like an Ally-oop, or when to leap for the basket the opposing team just threw to deny that point. It’s a rhythmic element that lacks any immediately obvious visual cues and thus takes some time to pick up on, making the controls harder than they really need to be for a newcomer. 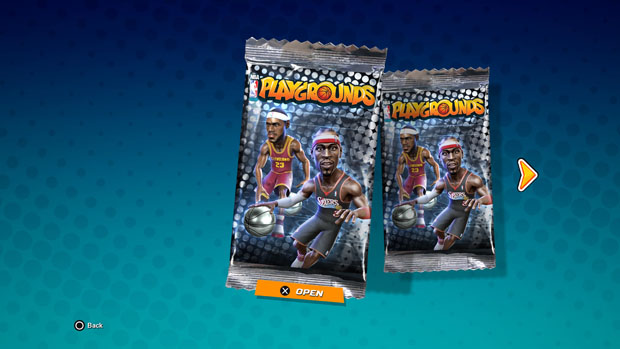 "Ideally if they game had incorporated a few more for fun modes in the vein of a Mario Sports title, it might have had more replay value."

The lack of modes is probably the biggest disappointment to NBA Playgrounds, and the game could have greatly benefited from treating itself with more of a party game touch to add some flair. Preforming daring feats like ally-oops and dunks build up a meter for each team that awards a random ‘lottery pick’ boon for that upcoming shot clock, and these buffs can turn game around with effects like ball auto aim and double points, should you be able to capitalize on them. Ideally if they game had incorporated a few more for fun modes in the vein of a Mario Sports title, it might have had more replay value.

Of course, getting the lottery picks depends on your ability to coordinate with your teammate and work around the opposing team, and the AI in Playgrounds quickly taught me not to get my hopes up. You can request the AI to prep for an ally-oop or to push the enemy to throw them off the ball, but these requests rarely go heeded when you hoped they would. Being unable to count on the AI to maintain the rhythm the rest of the game relies on diminishes their usefulness to just being a place to pass the ball, or at worst give your foe an easy steal. 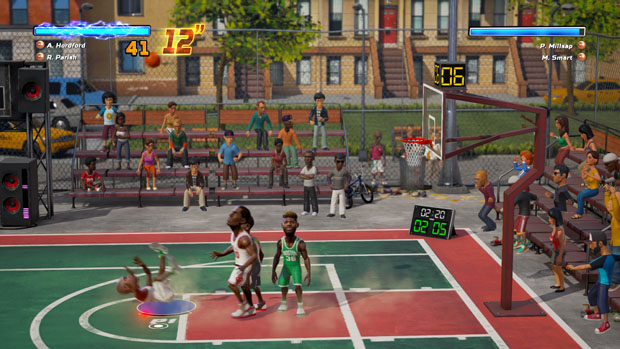 "Online play does help the repetition slightly, as a human player is going to make more mistakes and overall offers a more dynamic game."

The repeated game type ad nauseam is only matched by the ear grating announcers, repeating the same terrible jokes you heard the last several games to the point of annoyance. The detailed yet still plastic looking character models don’t really inspire much confidence for the rest of the presentation, but they have such lively and stretchy animations that bring a bounciness to the best moments that the game can bring. It almost makes it easy to forgive the otherwise lacking presentation and strange looking models.

Online play does help the repetition slightly, as a human player is going to make more mistakes and overall offers a more dynamic game. Online games tend to highlight the goofy showmanship the game couldn’t quite nail in single player when you’re both competing not just to win, but to look cool doing it. The levelling structure feels familiar but the same game types are still in play and factor into just how long you’ll even be bothered, if you find a match at all.

Plagued by lack of content, NBA Playgrounds doesn’t quite tap into the lofty heights of slapstick silliness that made its forbearers so enjoyable. Some strange controls and AI hiccups work with the lack of modes to show an almost all encompassing lack of staying power, and the presentation, aside from animations also grates. Pick up game? Better to pick up an actual basketball.

This game was reviewed on the Playstation 4.

A single game type within a tiny amount of modes. Controls can be strange to get a handle on and AI is hard to count on.

NBA Playgrounds is let down by several little things, but most chiefly by the singular mode on offer. If they launched with some more fun modes to embrace the irreverent tone the game clearly wants to go for, or add them later for some added value, then the game might have some staying power.

A copy of this game was provided by developer/publisher for review purposes. Click here to know more about our Reviews Policy.
Tagged With: NBA Playgrounds, ps4, Switch