As many of you know I was at the EA showcase event a few days ago and I got a chance to take a zip drive for Need for Speed: Hot Pursuit and I am very glad to report that Hot Pursuit is building up to be a solid racer. I got a chance to play one of the modes in the game called “Interceptor 1 vs 1” where I got the player plays as a cop and my job as you must have guess: Crush the racer. 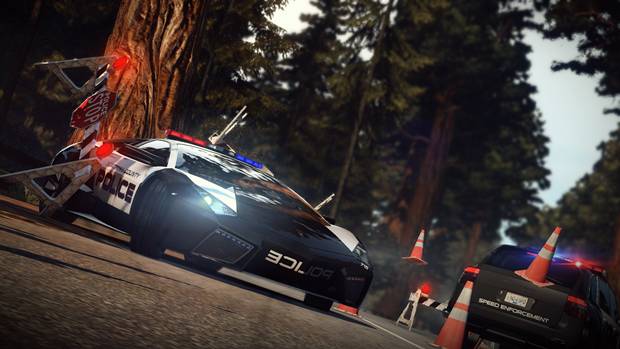 The demo gave you a chance to play as a cop

As you guys are aware that the game is being developed by the extremely talented Criterion Games, the same guys that bought you the esteemed Burnout franchise and without a shadow of a doubt influences from that series have been utilized in the game. EA has described Need for Speed as revolutionary but to be honest it is not revolutionary but something better than that: FUN. The demo had several police cars to choose from and I took one for the drive. Unfortunately I did not have a chance to try out the various customization options available since there were a ton of impatient journalist who were eager to get a hands on. So the demo began in the same way, a short scene played out which showed that the racer is miles ahead of you. Your job is to catch up with him and crush him…burnout style. 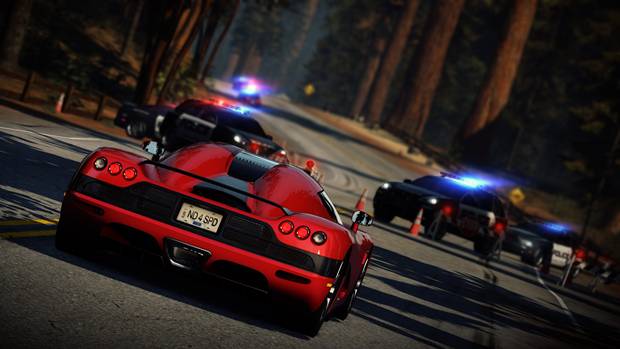 The racer was awesomely quick

I got a chance to try out the PlayStation 3 version and the controls I thought were a bit too simple. I mean I was expecting something revolutionary but the controls seem to be straight forward with the R1 button for acceleration, L1 for heavy brakes, and Square for hand brakes. While playing the game I totally forgot that I was playing a Need for Speed game, in fact at one stage I thought its NFS in name but in game it’s actually Burnout. Obviously it had some differences which I am going to talk about a bit later. Turbo Boost also makes a return to the game, the more time you are accelerating, the more your boost meter will increase. The racer was pretty fast and so I was having a hard time catching up to him. Now there are two ways the game can come to a closure. Either you do 100% damage to the racer or damage your own car which is indicated by your screen greying out. Now in order to take down the racer you have to speed up, get close and dash your car in to it or alternatively employ spike traps which can be instantiated by pressing the right direction button at irregular intervals. After the racer is KOED a short flick plays out just like in the previous games.

Overall I think Hot Pursuit borrows a lot of elements from Burnout and Most Wanted and puts them to good use and might be a solid racer when it hits the shelves. I also wanted to try out the Auto Log feature but unfortunately it was not available. Stay tuned with GB for a full review of the game in the coming weeks.