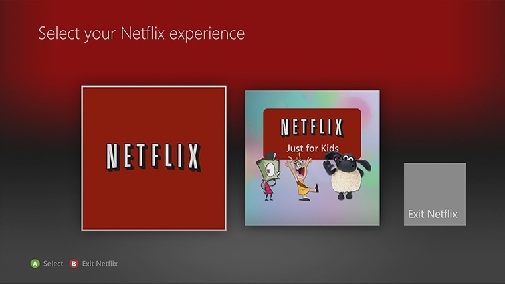 The Xbox 360 Netflix video app has just received a fancy new feature which will help parents filter the entire Netflix library to only show kid-appropriate content with just a single press of a button.

As soon as you boot up the Netflix app from the Xbox 360 dashboard you’ll be prompted to download a minor, 20mb update which introduces the new “Just for Kids” feature of Netflix.

After the update, you’ll be greeted with a new splash screen whenever you launch the video service which shows the tradition Netflix logo on the left and a new “Just for Kids” icon on the right. Just for Kids is exactly what it says, it features everything that a kid could love without any chance of them accidentally launching a film or TV series they shouldn’t be watching at there current age.

Don’t worry though, this new feature is a win-win for everyone; it makes finding cartoons from our childhood significantly easier.

Netflix is available on a wide variety of platforms and it’s entire library can be streamed for £5.99 a month.