Sucker Punch is acting all coy about the game here. 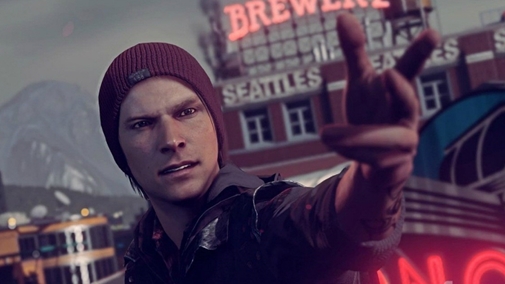 Sucker Punch’s inFamous: Second Son, the next installment in their inFamous saga, is due out in about a month, and the details about the game are swiftly heating up. Taking to answering fans’ questions about the upcoming game on Twitter, they managed to tease a whole lot while giving us almost nothing.

Responding to when a fan asked them about a karma bomb for the neon powers, Sucker Punch had only this to say-

‘Well we’ve been very careful not to show exactly what you are asking in its entirety. However, we have teased it fairly well!’

Which all but confirms it, doesn’t it?

They were similarly revealing in their coyness when a fan asked them about flying and climbing enemies besides the conduits working for the DUP. To this, they said: “Good question, can’t answer : )”

Really guys, you might as well be shouting ‘YES’ from the rooftops at this point.

Finally, to a question raised about fog, Sucker Punch confirmed that the city can be completely fog free, and that you are in fact given full control of how foggy you want it to be via your in game abilities.

“We can control the level of fog. And no, it is not permanent. We have multiple times of day to choose from most w/o fog.”