The late, great Rodney Dangerfield was quoted as saying, “the other night I went to the fights and a hockey game broke out.”  Now, there are different types of hockey fans that relate to this line. There are the fans who think fighting takes away from the game and there are the fans that feel  an occasional fight is a normal thing. Then there are those who only look forward to the fights in a hockey game – those same people watch car races only in hopes to see a crash.

EA Sports is back once again with NHL ’10. Now before you start with the moans and groans, gimme a chance, it’s not as bad as you may expect it to be.

Honestly, I’m not a huge hockey fan like I was back about 15 or 20 years ago. Boston Bruins was my team and [;ayers like Cam Neely, Ray Bouque, Don Sweeny, Andy Moog, Ted Donato, and a few others were in my opinion the boys to beat. Well, just about most, if not all have since retired or are on the brink of. So, if you were ask me to name two people on the current Bruins’ roster, I’d give you nothing more than a blank stare.

As well as being absent from following professional hockey I have also been absent in the annual edition of EA Sports’ NHL games, I have to say, EA has advanced beyond a point I ever imagined it could for a hockey game. 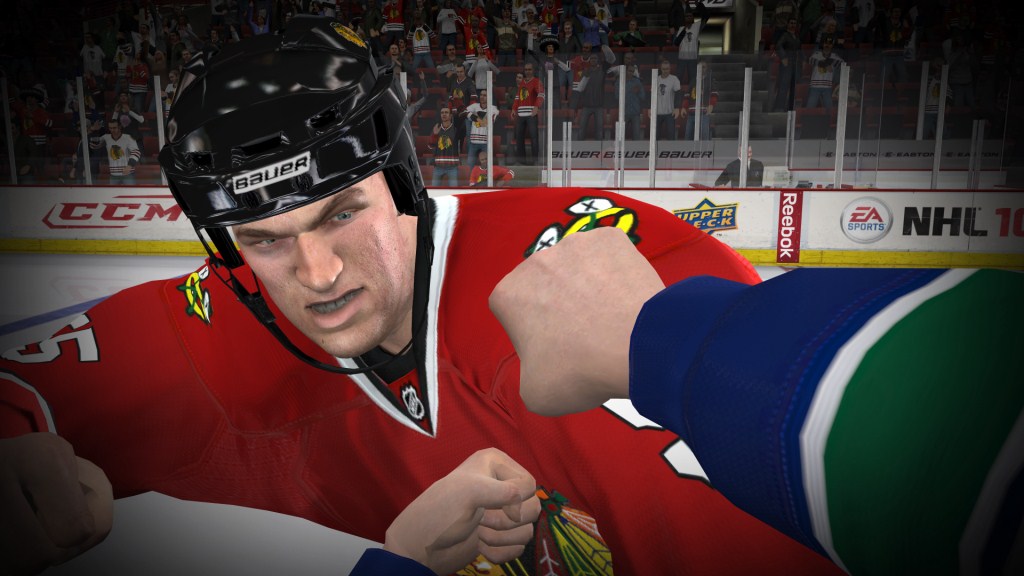 Do I have something in my teeth? Do I HAVE teeth ?

First thing I noticed when I fired up the game was the graphics, graphics were sharp and everything from people in the crowd to the lines and logo on the ice looked really sharp. The game starts off with a small tutorial on how to preform wrist shots, slap shots  and how to aim your shots. Then you get a lesson in a new feature for fighting. In past editions it was always a view of both players facing off toe-to-toe, the angle wold usually zoom in on these two combatants, but not like it does in this ’10 edition. When intimidated ot to try to start a fight, you simply press the ‘Y’  (on Xbox 360) or triangle button (on PS3) – once the fight is about to begin, the view kinda spirals around then ends up with you in a first-person view, like a hockey version of Fight Night Round 4. Fighting controls are pretty simple, simply use the right analog stick to to move side to side, or up and down to tug on your opponent’s jersey, and use the left analog stick up and down to throw punches. 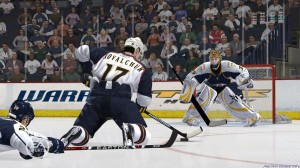 The action can get intense

Now when I normally play a new sports game, I jump right in and select my favorite team and start the season. I figured if it takes me a few games to get the controlls down, out of a 82 or 84 game season I should be able to hold my own. So I chose my team from the old days, the Boston Bruins and I actually reconize 1 name on the roster, Zdeno Chara. As far as the rest, the names could be made up for all I know. Game starts with your team walking from the dressing room through the hall, then stops just before going out onto the ice. The lights are down, the music is pumping, the fans are going crazy for their home team, lights are flashing while the team logo is projected onto the ice spinning around – then your team hits the ice for the pre-game skate warm up. From there on it’s Bill Clement &amp; Gary Thorne provide the color commentary through out the match up.

Some of the newer features added, preisisoin passing. A pass to a teammate doesn’t always go tape to tape, so player’s AI is advance to where players will use their skates to kick the puck ahead to gain control with their stick. A “Battle for the Cup” mode was added, allowing you to jump right ito the play-offs and earn the coveted Lord Stanley’s Cup. My favorite feature “Battle Along the Boards”  allows you to pin the puck against the boards in hopes to draw in the opponent and hopefully to be able to kick out the puck to a team mate and possibly set up a play down the ice. Another new feature is “spectacular goals.”  Players will do almost everything short of taking their lives to put that puck in the net. You’ll see players will one-time loose pucks, shoot from their knees and and will attempt to bat pucks out of the air. I’ve scored a few goals like this, looks really cool on the replay – although the computer did it and scored and it clearly was high-stickig, but no call. 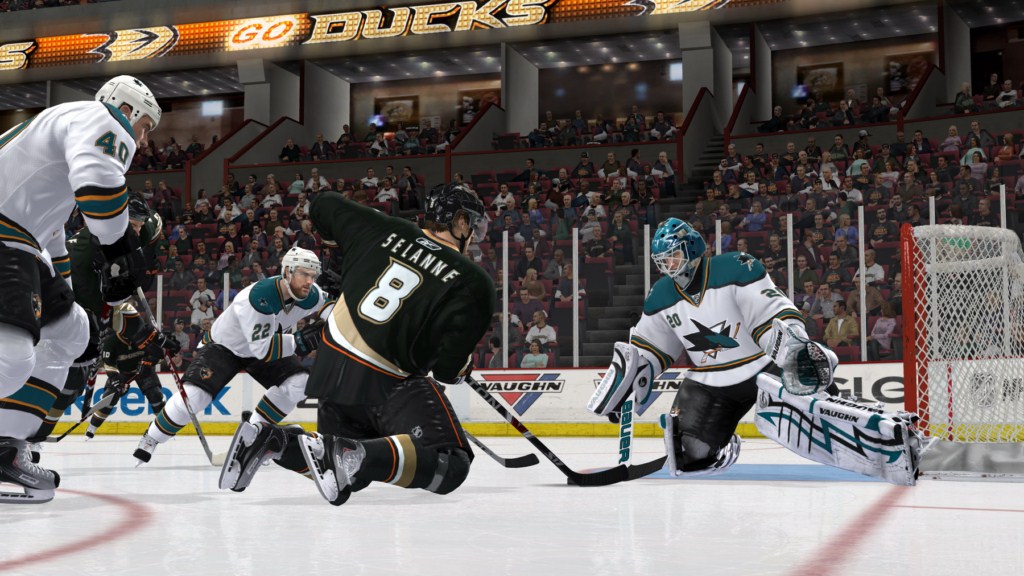 Will this go in?

Now overall, my favorite feature is the “Be A Pro” mode. In this mode, you creater you’re own skater. You chose the position, jersey number, where he’s from, lefty or righty, pick out hs equipment, everything right down to scars or freckles on his face. From there you take part in the Prospect Game where the top North American prospects take on the top Worl d Prospects in one game. Now just like as if it were actually YOU on the team, you only control your player and only when he’s on the ice. Otherwise you get a great view of the game from the bench (or penalty box if that’s the type of game you play. You get scored on a number of things, obviously it helps to score and at least show your a team player and get an assist or two, but they also look at how well you play your position on offense &amp; defense. After the game you then enter the NHL draft. The better you do in the game, the higher you’ll be in thedraft order. I was taken 8th myself.

Now, just because you’re a “NHL’er” doesn’t mean you have a permanent locker in the dressing room. The team’s general manager gives you a shot and evaluats your performance the decids whether or not you earned a spot on the roster or do need more work and at to report to the team’s minor league or AHL team to broaden your skills. I was drafted my the Tampa Bay Lightning and after 4 games in the NHL, even though I was second on the team in scoring, I was sent to the Norfolk Admerials and put on the third scoring line. I worked my way up and lead the team in scoring and have een moved to the 2nd scoring line.  This makes the game that more fun in my opinion as you’re trying to score and set up others on your team to score so you could one day be back in the NHL arenas. Another thing that makes this game ineresting to me that while I’m on the AHL roster, I actually live real close to two different AHL arenas, so it’s pretty cool when my team is on the read at one of these venues.

All in all, NHL ’10 is a lot of fun, maybe because I’ve been out of the loop for so long, I really can’t say for sure. But the “Be A Pro” feature has got me hooked. It kind of incorporates a sports game into a RPG style game.

Tough to follow the puck at times, difficult to lay out the big hits, real easy to commit penalties.

Welcome to the edge of your seat excitement.

A copy of this game was provided by developer/publisher for review purposes. Click here to know more about our Reviews Policy.
Tagged With: EA, Microsoft, nhl, ps3, sony, xbox 360