Thankfully releasing for Xbox 360 and PS3.

Along with a variety of other sports titles, EA Canada showcased its latest edition of the NHL series. NHL 15 will be releasing on the Xbox 360, PS3, Xbox One and PS4 and will incorporate a ton of new features. It also looks really good and you should check it out above.

Some of the new features include 12 player collision physics, as these collisions will have an effect on the player’s status despite happening beyond his control, along with revamped puck physics. Players also look much more closer to their real-life counterparts so you’ll be noticing famous players all the more easily.

NHL 15 will be releasing September 9th in North America and September 11th in Europe. What are your thoughts on the game and how it looks? Let us know your thoughts in the comments below and stay tuned for more updates from E3 2014 in the coming hours for Sony and Ubisoft. 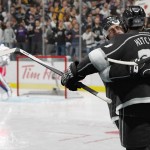 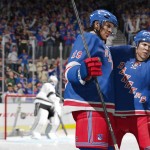