There is a nasty disease plaguing the world of Nier. It is commonly referred to as the Black Scrawl, and its spreading like wildfire. There is no known cure and guess what, your daughter has it. So here we are with a new release from Square Enix that is broadening Square’s horizons a little with violence, gore, and foul language. Something good to note is a real time fighting system, although there are some good and bad scenarios during battle. The visuals can be alright but for the most part are very dull, unsaturated and over all lacking the next generation luster. The voice acting is absolutely disgustingly unbearable. Two out of a lot of characters are actually decent. The story takes a long time to get interesting and when it does, it still isn’t that good. Nier does this very odd thing where you don’t get a lot of information ever. In fact I’m still some what confused on what actually happened.

Starting of with the good points of Nier because there really aren’t that many, the weapons are the best feature and you will still be annoyed. There are a lot of weapons to choose from as you go through the story, but primarily you will not use more than about 3 or 4. The system for upgrading weapons is just ridiculous and involves a lot of farming and running back and forth. Actually there is more pointless travel in Nier than a lot of MMO’s out there. You unlock “words” that you can add to your weapons. Words act like buffs, much like socket items in other games. You can also add words to your magic. 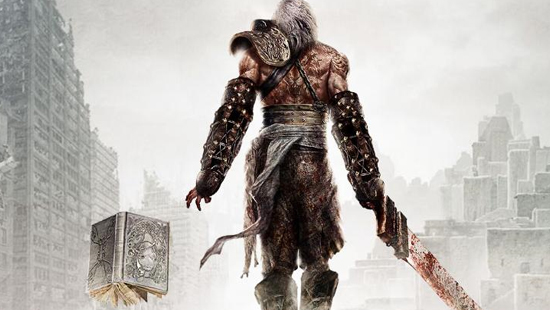 Don’t get to excited, Nier isn’t as cool as its art work.

The magic system has some good points but for all of the good there are two bad things. You are given a crap load of skills that you will never use. The primary magic you use has a lot of down falls which include anything from targeting issues to just missing a lot when you’re aiming right at an enemy. Also getting back to the less than good visual aspect, the magic looks awful. I feel like I’m giving Nier an awful review but it really does have a lot of sub par issues. The magic just looks dumb to me, its just red and black and very tacky. The enemy’s form of magic is just red and black balls that shoot at you in patterns. The magic is not doing the trick for me, visually or technically.

One light point of the game is something that has actually become a standard in action games within the past few years. Colossal monsters have proven to be some what of a fail safe. That is very apparent here as when I was nearly about to quit Nier because it was so boring the only thing that kept me interested was the unnaturally sized enemies. The standard enemies known as shades are boring and repetitive. You will fight them until the final minutes of the game and they really never change drastically. They are to be expected around every corner and are just annoying. 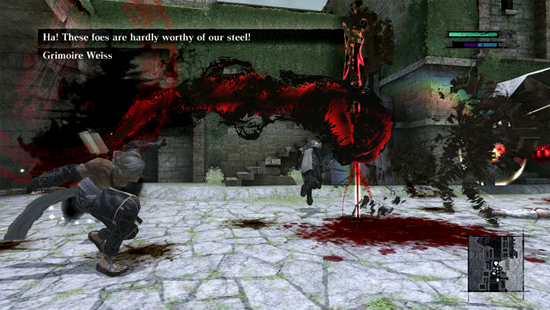 Using the ol’ magic fist, the coolest magic ability, and most commonly used.

Although fighting large creatures is fun, fighting mobs of little shades is a pain in the butt because of the fighting systems errors. It’s impossible to not get hit if you’re just mashing the swing button. Your character attacks in a set number of swings and after he reaches that he takes about a second of breathing time. It’s just enough time to let everyone take a swing at you. Also creatures can kick you while you’re down and it does a lot of damage. This is one of the more annoying problems. I think this should have been worked out in the testing phase.

The puzzles that are in Nier are so pointless to me. Not only are they just stupidly easy, they just feel like no testing went into them. When in the desert portion of the game, you will have to run through about four or five puzzle rooms. Don’t be afraid you can pretty much just run through them all in seconds. It took me ten minutes to pass through that stage. Nier is so long because it’s jammed full of pointless material like that and running from one location to another for absolutely no reason.  There are not always forms of fast travel either so pressing the evade button a lot to jump around like a wild man is actually faster than running.

Along your journey there are large amount of reading to endure. Quite possibly the most impressive and annoying part of the game are the literary portions. The writing is good if you are into reading, yet it sets the game back a lot and could have been done a lot better with interactive cut scenes like Resident Evil 5. I was enjoying reading but there are spots that get so long and its just white text on a black background so it’s hard to stay interesting.

Getting back to the pointless features of Nier there are two that really strike interest in my honest opinion. The fishing and the multiple choice options are absolutely terrible. Starting with the fishing I will say that I’m a huge fan of mini games, and I have always enjoyed fishing in games but man did Square really blow it here. One mission just throws you into the fishing system and doesn’t tell you where to go; it just marks it on your map and doesn’t let you know it did that. So I’m trying to catch fish right where I was awarded my pole and lure. This didn’t work out for me because the fish in that area are to high of a level so I wasted at least an hour there trying to catch a fish until I noticed the little red “x” on my map which was a different beach that I need to be at for newbie fish. 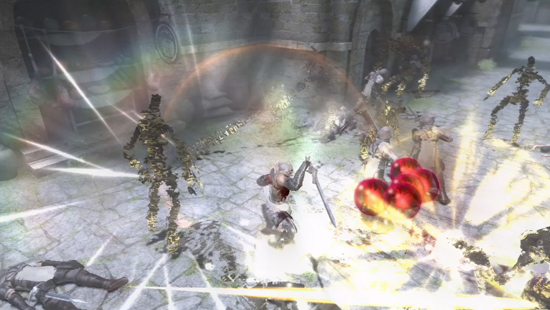 The multiple choice system is absolutely ridiculous and unnecessary. 90% of the time when multiple choices are given you can only select one answer. What I mean by that is it gives you the option to say what you want but only one of them works. If you pick the one the game doesn’t want you to pick it says something stupid like “no we can’t do that!” and then you have to pick the other answer. So really it isn’t multiple choices at all. This goes on and on in the game and every time I chose the funny answer or the one that would get me through the game faster I was never allowed. It’s absolutely terrible and I put shame on the developers for that.

There is a mount system but it’s nothing to write home about. Early in the game you get the option to kill a wild boar, but don’t waist your time as the boar is way beyond your ability at first. Once you are strong enough to kill him you gain his horn and you will now be able to ride him in the one area out side of the village. It’s really not very helpful and only cuts down on about sixty seconds of travel time to your next destination. There wasn’t a lot of thought put into the traveling system as you can only use the boating system towards the end of the game and I only used it twice.

The story does have its interesting twists and turn but for the most part it’s nothing that a majority of people wouldn’t have seen coming. The general story has a decent idea, but I think it could have been done a million times better if it where better written and had more time invested into it. I feel like it’s just a little dull for its actual potential. It almost feels as though it was written as the game was developed.  I obviously don’t know or think that is the case but Nier definitely gives that vibe of just not having a whole lot of attention put towards it. It almost feels like even though it was developed by Square Enix, it was a bunch of guys who finally got a chance to make a game under a big developer’s name. It doesn’t have that quality feel to it like Final Fantasy or Kingdom Hearts.

Overall my feelings of Nier are very simple. I think that’s it’s a game and story with loads of potential but it really was wasted by a lot of shenanigans. Its way longer than it needs to be and there are loads of features that should never have been put in. I think the focus of the game should have been on the visuals and the story being a little more in depth. If they could go back and remake this game with less crap in it and a lot more story development than it might be a successful title. As of right now, I can’t even recommend you rent this title; it’s just not a great game.

The music though very repetitive, has a certain epic feeling to it. The creatures can get colossal, and interesting.

Nier has a lot of very small issues that make it fairly annoying to sit through. The voice acting can be atrocious, and the visuals are absolutely not to date. Its is the most boring game you will ever play until about half way through and can have very MMO oriented missions, that involve a lot of senseless running to and fro.

Final Verdict:
MEDIOCRE
Nier is an out of the ordinary title for Square Enix. A 'Kill Bill' style blood bath and foul language set it apart from most other titles developed by Square. Nier has some potential but is brought to its knees by long boring game play, lackluster graphics, all accompanied by shoddy voice acting.
A copy of this game was provided by Developer/Publisher/Distributor/PR Agency for review purposes. Click here to know more about our Reviews Policy.