inja Gaiden 3: Razor’s Edge is an enhanced ported version for the PlayStation 3 and Xbox 360 with all the additional downloadable content and improvements to the game. The game originally launched for Wii U as a launch title in 2012 (check out the Wii U version review here). How does the enhanced port fare over to the PlayStation 3 and Xbox 360? In short, I am quite happy with the port and had a ton of fun with the game. However, I will be discussing the game’s presentation, gameplay, trophies and overall verdict in a more detailed manner as usual. 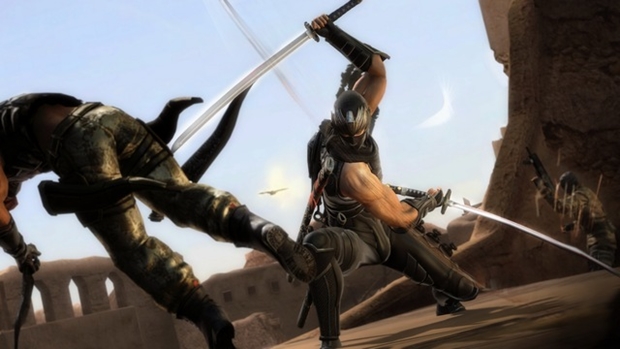 Ninja Gaiden 3: Razor’s Edge looks a little bit dated. The characters and monsters for the most part look nice, but they do not blend in well with the environments. The environments look rather bland compared to the characters, due to lower poly count and texture resolutions. It is not very bad though, the game still looks decent and most importantly fun to play.

The levels in the game are varied and you will be visiting different parts of the world such as islands, tech labs and more throughout the course of the game.

"Ninja Gaiden 3: Razor's Edge looks a little bit dated. The characters and monsters for the most part look nice, but they do not blend in well with the environments."

The music in the game does the job fine; some of the voice acting can get cheesy due to the dialogue of the game. The story in Ninja Gaiden 3: Razor’s Edge is simple. Ryu Hayabusa is visited by the Japan’s Self-Defense Force and ask him to aid them against the terrorist threats in London. As you can imagine, things start to happen as you play through the game and the story continues.

To be completely honest I did not care about the story as it was just not interesting to me and I believe it will not be for others either. Ninja Gaiden was never known for a great story or fantastic characters, the game was always about the challenging gameplay and combat. If you are looking for a deep storyline with excellent narrative then look elsewhere because you will not find it here 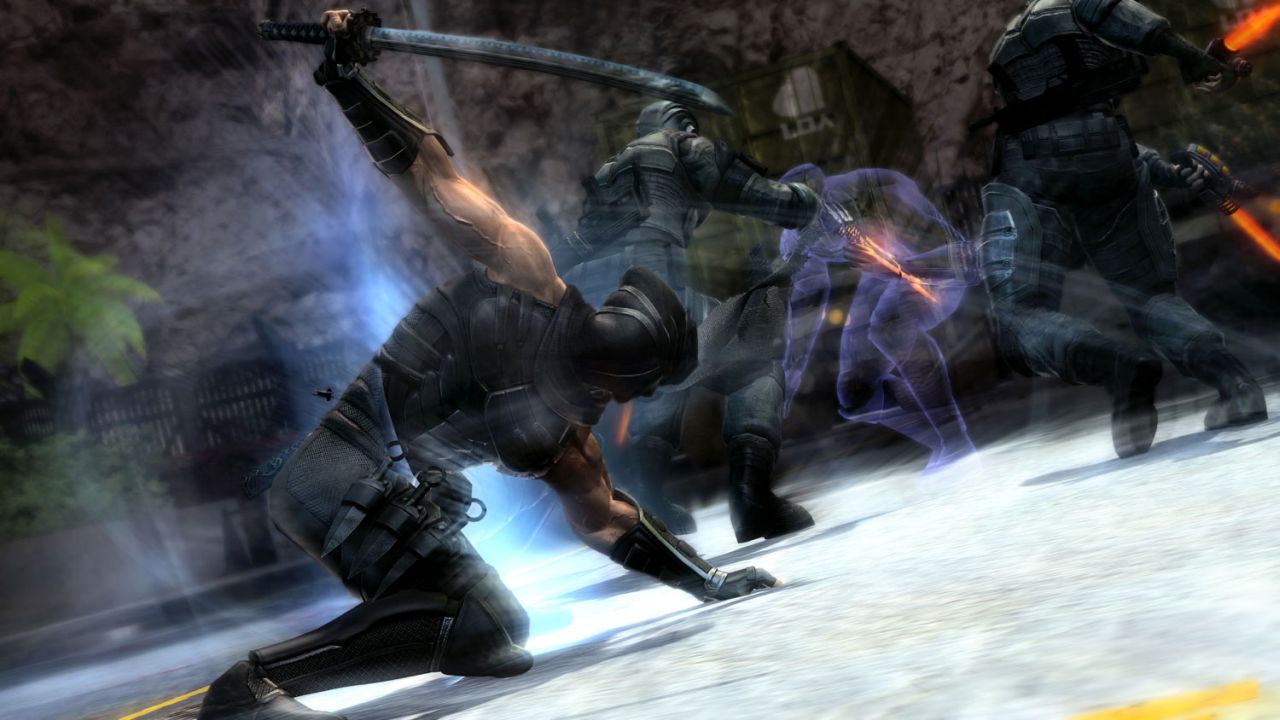 Ninja Gaiden 3: Razor’s Edge truly shines in it’s gameplay and its awesome combat. The Ninja Gaiden franchised was always about the challenging and smart enemy AI, difficult boss fights and fast-paced adrenaline pumping combat. Thanks to flash animations and responsive combat controls, the gameplay feels smooth and fun. There are different weapons that you can get throughout the game, but as always, you start with your default dragon blade katana. Later on you will unlock a Lunar Staff, a giant scythe called Eclipse that acts as a slow heavy weapon, dual katanas and more.

Each weapon is unique; all of them have different styles and combos and serve a particular purpose. One of the weapons can be more effective against a particular enemy as opposed to a different weapon and so on. Best part of the combat system is that it is just never gets old thanks to the beautiful gory and bloody executions that you can trigger when an enemy is missing a part of their body.

Throughout the game you will also encounter hidden collectable items such as Golden Scarabs and Skulls. You gain 5000 Karma for every Golden Scarab collected. However, every time you get 5 Golden Scarabs you unlock new character traits, ninpos and of course weapons. There are a total of 50 Golden Scarabs to collect in the entire game and they are essential to the player if they plan on beating the game on Ultimate Ninja difficulty. 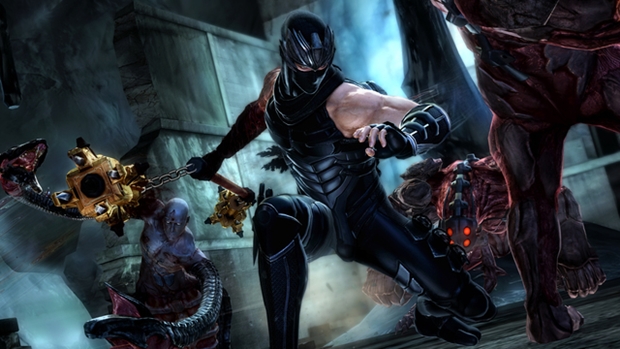 As you slay humanoids and fiends throughout your challenging adventure, you will start gaining something called “Karma”. Karma is an in-game experience currency that is used to unlock special moves for Ryu, level up his weapons and Ninpos. Ninpos are your magical based attacks that can only be used when your ninpo energy bar is full.

"There will be many times where you will just escape a combat segment with a small inch of your life bar still on the screen. "

Players can restore some of their health by using their Ninpo attack during combat if they are in a sticky situation. There will be many times where you will just escape a combat segment with a small inch of your life bar still on the screen. There are four different Ninpos that are available in the game. The first one is unlocked at start of the game; the other three will be unlocked later.

The game’s combat sections get difficult as you get further in the later levels. Players will eventually start fighting with harder enemy combinations and will be forced to use strategy in order to live and continue on to the next save point. Luckily, after every combat section, the game saves a checkpoint so you do not have to fight again if you lose the next battle. Developers did a good job with the balancing of passive checkpoints and actual game saves throughout the game. 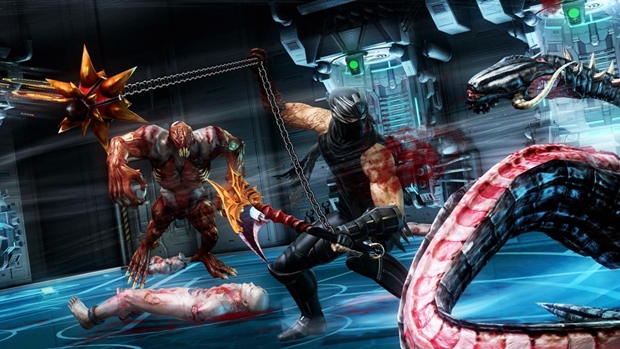 Another cool thing about the game is that throughout the story you will also play as the female characters. Girls like Ayane, Kasumi and Momiji are all playable in Ninja Gaiden 3: Razors Edge. Each of them has their own unique weapon and fighting styles. This makes the game more varied just because Ryu is not the only badass around the block and there are other characters and weapons to play with.

Overall, the single-player campaign is divided into 8 days (8 chapters to be more precise). However, some of the days you also play as one of the female characters as part of the game’s main storyline. Each day takes about 30-40 minutes to beat depending on your play style, difficulty and skill. I probably spent though a couple of hours on each level due to the fact I was playing on Mentor difficulty.

Ninja Gaiden 3: Razor’s Edge also packs in Ninja Trials and multiplayer options on top of the single-player campaign. Ninja Trials are awesome and can be played both solo and co-op online. You can pick which character you want to play online, level up your ranking, and unlock weapons, character traits and costumes that are completely separate from the single-player campaign.

Clan Battles are a new addition to the Ninja Gaiden series; these are online team death-matches that are up to eight players, 4 on each team. However, I did not really enjoy the clan battles. The online combat between players’ feels somewhat clunky. Majority of the time I was trying to figure out if it was due to latenc, skill or if it just did not feel right. I think overall, this versus mode can eventually work but maybe in the future titles of the franchise but not in this one. I can see this as an experiment for the developers rather than an actual legit versus mode.

Trophies in Ninja Gaiden 3: Razor’s Edge is perfect in my opinion. They range from beating the game on each of the difficulties, completing a certain amount of Ninja Trials on particular difficulty and leveling up to level 50 online which can actually be done solo through the Ninja Trials if you don’t want to play co-op or clan battles.

Collecting all of the Scarabs and Skulls will also reward you with trophies. This is probably one of the more challenging platinum trophies to get due to the difficulty of the Ninja Gaiden franchise. About 90% of the trophies are all skill based. 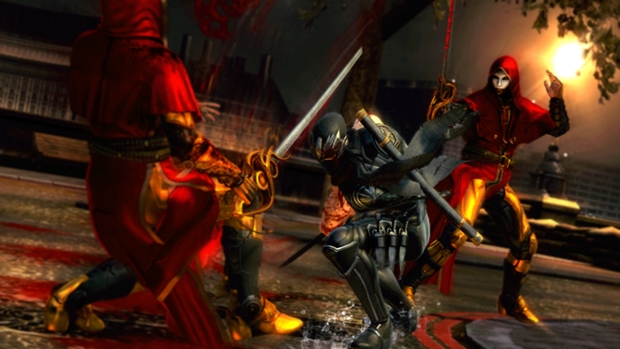 "The game costs only $40 and includes all of the downloadable content, improved AI and enhanced gameplay. You cannot go wrong with this purchase."

Ninja Gaiden 3 Razor’s Edge is an excellent single-player third-person action game. It provides a great challenge for those who are looking for enjoyable combat, ninja trials provide plenty of replay value for the game and the addition of a completely separate online ranking system and characters is nice.

However, the game’s dated graphics, non-interesting story and some of the camera issues can bog down the experience just a tad bit, but it is not that bad. If you are a fan of the series you will enjoy this game, I also recommend it to those that have never played a Ninja Gaiden game before. The game costs only $40 and includes all of the downloadable content, improved AI and enhanced gameplay. You cannot go wrong with this purchase.

Camera is too close to Ryu and can cause issues, graphics starting to feel a bit dated, clan battles are not that fun and feel clunky, story is not interesting along with cheesy dialogue and voice acting.

Final Verdict:
SUPERB
Ninja Gaiden 3: Razor's Edge is a great single-player experience with a separate online mode and plenty of additional content. Combat system feels great. Ninja Trials are a ton of fun to attempt and they both be done solo or co-op. If you're looking for a complete Ninja Gaiden experience then this is it and it will only cost you $40.
A copy of this game was provided by Developer/Publisher/Distributor/PR Agency for review purposes. Click here to know more about our Reviews Policy.