Nintendo to charge a one-time fee of $.50 to let minors use Nintendo Network

Earlier we reported that the Nintendo Network is locked to one Wii U console and it looks like if you have kids at your house who want to get on the network, they will have to pay a one-time fee of $.050 so that there is proof of parent/guardian approval. 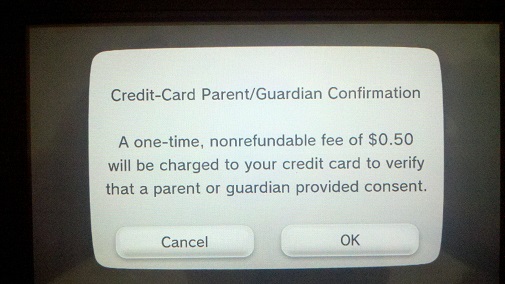 As the image suggests, the fee is straightforward, but one thing I don’t understand is why it is non-refundable. Most banks, Paypal, and other services charge the authorization fee and refund it later once they get proof, but Nintendo is keeping the money, and when you consider 4-5 million accounts can mean huge profit for the company, the motive comes into questioning.

It was revealed on the Nintendo website, and more details are given as to how they conduct their business. The charge should not be a big deal to many, but it’s still weird how they are making it a non-refundable one.

We have learned that you can’t really stop kids, they will do anything they want–even steal–if it means getting on the Network. Sometimes parents don’t even care what the kids are doing. When you factor in all these scenarios, it really becomes something that Nintendo has to openly talk about.

However, they won’t, and that’s how they roll. Tell us what you think in the comments section below.