Observation Review – An Excellent Narrative Dragged Down By Cumbersome Gameplay

The war between narrative and gameplay.

I booted up Observation with very minimal knowledge of the game. I had heard of it in passing while casually browsing the internet, and I was only somewhat familiar with its developer, No Code, and their previous work on the beloved episodic horror game, Stories Untold. Not knowing much beyond the very basics of what the game was about allowed me to experience its surprises unspoiled, and I don’t think I could’ve asked for a better way to enjoy Observation, even if not all of said surprises were positive. 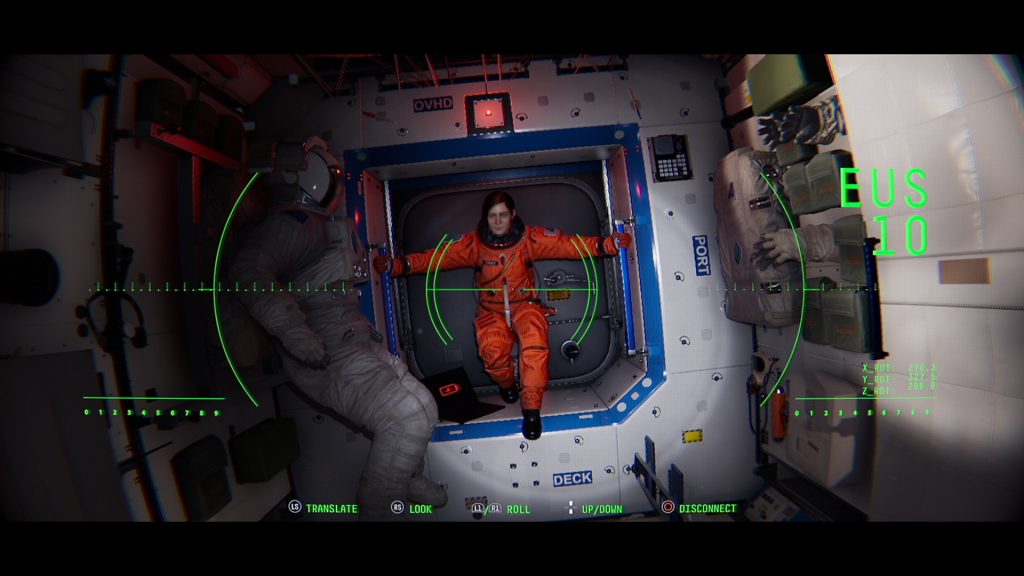 "There’s an underlying feeling that SAM itself is having to completely relearn its own programming as it goes, leading to a feeling of anxiety as you embody what may or may not be the true culprit behind the station’s disastrous state. It’s cryptic, and it works excellently to set the game up as a suspenseful “whodunit” of sorts."

See, Observation aims to disorient and cause discomfort by casting players in an unconventional role – your perspective comes solely from an omnipresent AI named SAM located aboard a recently damaged space station. You’re not initially given any further understanding of the events that transpired prior to coming back online, but you’re immediately greeted by the scared and confused human, Emma Fisher, who is seemingly the last remaining crewman aboard the station. After a lengthy introduction gives you the basics of the game, you learn that you’re responsible for having transported the space station to another planet far beyond Earth and essentially dooming its inhabitants. When asked why, you simply respond, “I don’t know.” The screen cuts to black. Cue electrifying opening credits.

From the very beginning, SAM and Emma become well aware that whatever has happened to the ship has also apparently damaged some very core functions of SAM – including his memory. There are corrupted menus, broken tracking features, and a sense of trepidation from Emma. But she’s ultimately forced to trust you despite her concerns because you’re the only chance she has. It’s this intriguing premise and presentation that makes Observation such an engaging experience. There’s an underlying feeling that SAM itself is having to completely relearn its own programming as it goes, leading to a feeling of anxiety as you embody what may or may not be the true culprit behind the station’s disastrous state. It’s cryptic, and it works excellently to set the game up as a suspenseful “whodunit” of sorts. Above-average voice acting makes the characters relatable with obvious feelings of apprehension. It meshes well with the eerie space station, a wonderfully haunting locale that builds tension solely through its quiet but disheveled ambiance.

Being in control of an AI means that the entirety of your time with the game is spent seeing things through low-quality camera lenses or data screens full of schematics, computer messages, and errors. There are various segments of the ship, and each is equipped with its own cameras, allowing you to freely jump around as you work to unfold the mystery. This is initially very confining, but Emma presents you with a sphere camera near the beginning of the game that allows you to freely float through the station at will, and switching from static cameras to the sphere is seamless and often necessary to fully explore and discover areas. 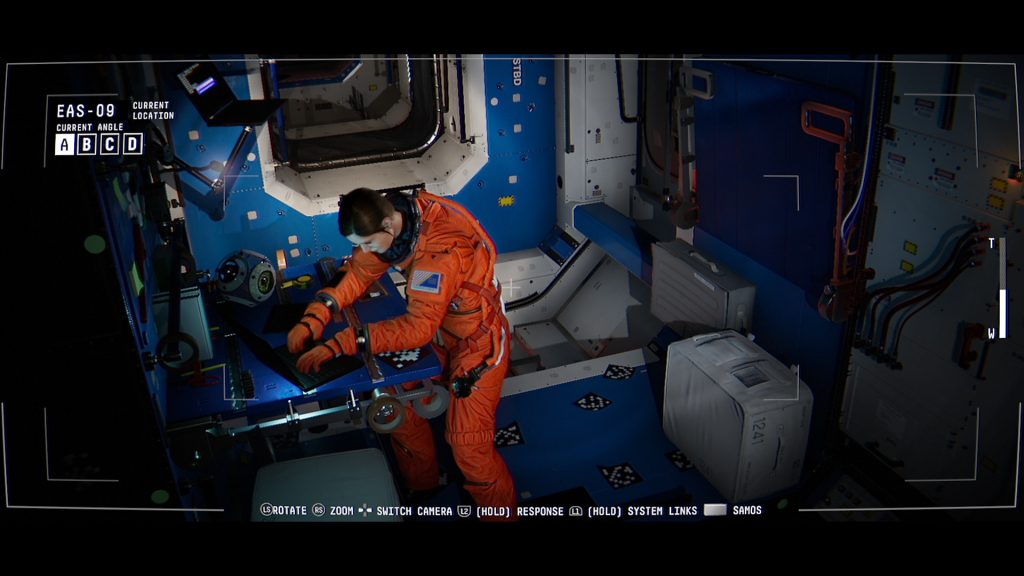 "Forcing you to discover obscure solutions on your own works fine in some games, but Observation’s focus on narrative leaves these moments feeling more like disheartening roadblocks than rewarding problem-solving."

But as compelling of a narrative and concept Observation presents right out of the gate, it stumbles in its fundamental gameplay. Controlling the camera sphere in zero gravity is a chore, and I found myself frequently bumping into walls and objects as I fumbled with the floaty controls. Turning is especially cumbersome, and since gameplay heavily revolves around finding/scanning objects, it was endlessly frustrating to try to align the camera’s focus on an object.

The objectives given to you by Emma are vague, and I frequently found myself wandering around the ship in the right area but being completely unable to understand how to complete my task. Early on, I was asked to move from one side of the ship to the other to complete an objective, but I soon reached a dead end. I was forced to clumsily maneuver the floating camera around multiple cluttered rooms in search of just the right thing I needed, then switch to a mounted camera in another room, find a door, engage in a quick mini-game to unlock it, and then proceed to the next room. None of this sounds abnormally hard to figure out until you’re wandering around playing trial and error for 10 minutes because the game doesn’t give any clear understanding of the process.

Forcing you to discover obscure solutions on your own works fine in some games, but Observation’s focus on narrative leaves these moments feeling more like disheartening roadblocks than rewarding problem-solving. A little more guidance could’ve gone a long way. But if you’re able to tough through it, some optional exploration and objectives can lead to expositional logs and core function upgrades, the latter of which can sometimes alleviate some of the tedium associated with repetitive tasks. 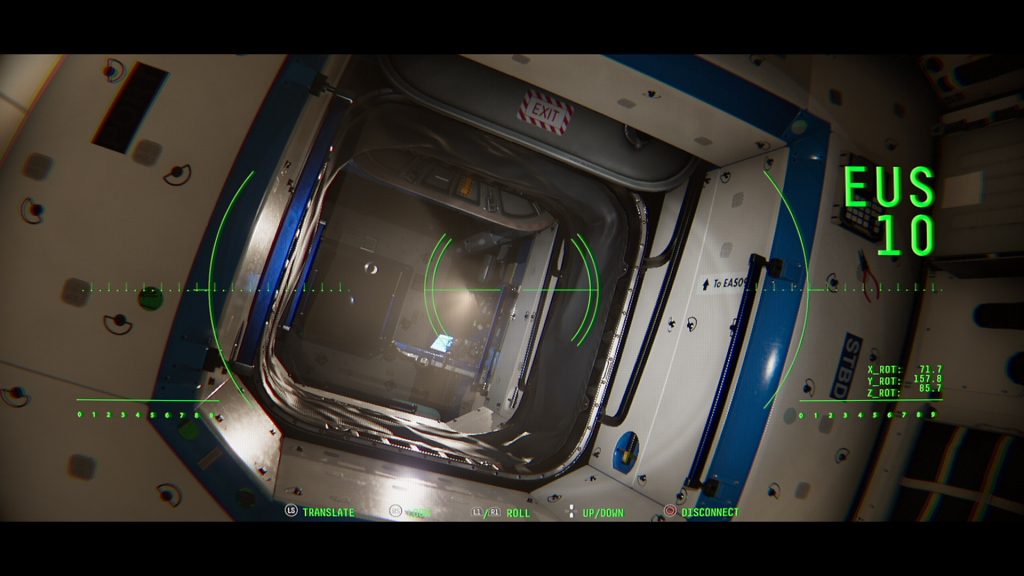 "Thankfully, despite its fundamentally flawed puzzle and navigation elements, Observation remains a mystery worth seeing through simply for its story and presentation values."

The problem extends beyond simple navigational issues and to the actual mini-games themselves. Opening doors, booting up systems, and other tasks around the station often require strange, unexplained boards to appear, forcing you to not only try to solve the puzzle but also to find out what the puzzle’s objective even is to begin with. The ambiguous puzzle mechanics drag down the experience through further trial and error gameplay. Many of them are timed and create a rapid onset of urgency without giving players even a rudimentary sense of direction. Having to restart a challenging puzzle multiple times just to understand the concept isn’t enjoyable – it’s frustrating, and it works strongly against the pacing of the narrative and overarching exploration, especially since some of these scenarios are tied to win/lose outcomes that permanently affect access to certain reactions or areas.

Thankfully, despite its fundamentally flawed puzzle and navigation elements, Observation remains a mystery worth seeing through simply for its story and presentation values. Casting players as a rogue AI poses a lot of possibilities from the very beginning… Are you the good guy? Are you the bad guy? These questions linger with you as you unravel the game’s central mystery, and while I would’ve loved to see it rely less on its unwieldly game-ier side, it manages to pull everything together on the whole to leave a lasting impression on its audience.

Final Verdict:
FAIR
Observation combines an excellent narrative and presentation with some often cumbersome gameplay elements that really drag the experience down. It’s absolutely worth seeing through to its conclusion, but it may not come easy to the impatient and unforgiving.
A copy of this game was provided by Developer/Publisher/Distributor/PR Agency for review purposes. Click here to know more about our Reviews Policy.