Octodad is one of those experimental games that just seems unorthodox but undeniably appealing to the vast masses. The product of students from DePaul University, who later went on to form Young Horses Inc., the game’s idea was originally meant as a joke. Several awards later and with backing from Sony to bring the sequel Octodad: Dadliest Catch to the PlayStation 4 as an exclusive indie title, it’s obvious that the series has become something much bigger.

We recently had a chance to speak to community manager and president of Young Horses Inc. Philip Tibitoski about the game, which is set to release next year, as well views on the current indie development scene, crowd-funding through Kickstarter and the experience of working with Sony.

"We never expected for Octodad to go this far or be popular enough for something like being at E3 to happen. "

Ravi Sinha: Octodad: Dadliest Catch is the sequel to the original, and was one of the first games to get through the Steam Greenlight process. Now, it’s being prominently featured as one of the few indie titles to be exclusive to the PlayStation 4 with the next generation of consoles. How does it feel, given that the game originally started out as a joke?

Philip Tibitoski: I’m going to quote our audio guru Seth Parker here, “Like Riding on a flaming T Rex while juggling 15 chainsaws that are spitting acid.” It’s surreal. We never expected for Octodad to go this far or be popular enough for something like being at E3 to happen. 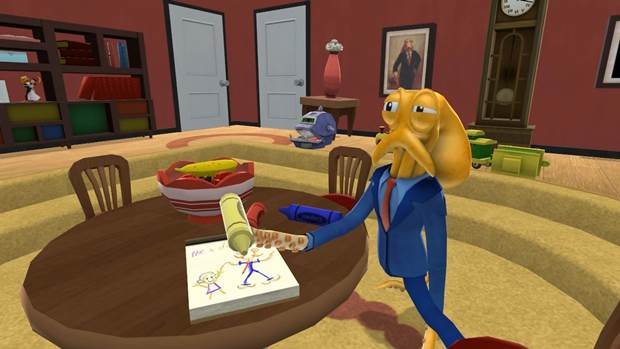 Ravi Sinha: Octodad: Dadliest Catch continues the story of the loving husband who’s actually an octopus but where can it go from here in story terms? Will we see the chef from the first game returning to take his revenge on Octodad?

Philip Tibitoski: In Dadliest Catch there’s a bit more conflict to be resolved. Octodad finds himself stuck between his fear of going to the aquarium and being a good dad by taking his family out for some bonding time. The chef does make his return, but we aren’t quite ready to spill the beans on just how it all plays out.

"We haven't taken the time to fully explore the possibilities of the DualShock4 yet, but we do want to utilize its newer features if possible. We're spending time experimenting with how we might use the touchpad and lightbar. "

Ravi Sinha: What new gameplay features will be implemented in the sequel? Do any of them happen to take advantage of the PS4’s features such as the DualShock 4’s touchpad or Cloud computing?

Philip Tibitoski: In Dadliest Catch you finally get to explore spaces outside of Octodad’s home. In the first game for multiple reasons we were restricted to having the whole game take place in Octodad’s house. This time around you visit places like a grocery store and aquarium. The difference in gameplay then comes from your interaction with strangers out in the world. Your family is used to your odd behavior and it takes a lot for them to realize something weird is going on, but with the general populace it’s a whole other story.

Because of this we’ve spent a lot of time working out how suspicion will be better integrated into the moment to moment gameplay, and also into making the world feel alive with other characters.

We haven’t taken the time to fully explore the possibilities of the DualShock4 yet, but we do want to utilize its newer features if possible. We’re spending time experimenting with how we might use the touchpad and lightbar. 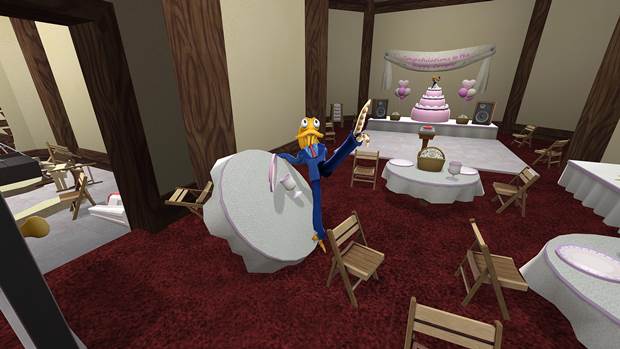 Ravi Sinha: Will Dadliest Catch be as long – or short, depending on who you ask – as the original? Or will it be significantly longer?

Philip Tibitoski: Dadliest Catch will end up being about 4 hours long for an average player to complete the main story. This is currently our estimate from playing the game, but we’re pretty skilled in the way of the Octodad so times could vary. I can say it’s significantly longer than the first game.

"With Dadliest Catch we've spent a lot of time getting rid of the unintentionally frustrating parts of the game. The controls have become more responsive to your desires, but they still create chaotic situations which are funny. "

Ravi Sinha: What prompted the decision to bring Octodad to the PlayStation 4 and not to the Xbox One?

Philip Tibitoski: The simple answer is that the Xbox One requires a publisher and we’re pretty keen on self-publishing. We have no reason to give anyone else a cut of the pie when we don’t desperately need any additional resources that we aren’t getting ourselves.

Sony sees self-publishing as a good thing and provided a clean path for us to do that on the PS4. Not to mention their attitude when it comes to dealing with smaller studios like us has been incredibly positive. Microsoft hasn’t been so receptive.

Ravi Sinha: The original Octodad was freeware but Dadliest Catch will retail for a price. Far from turning away fans of the original, what will be done to ensure it’s worth the money spent?

Philip Tibitoski: With Dadliest Catch we’ve spent a lot of time getting rid of the unintentionally frustrating parts of the game. The controls have become more responsive to your desires, but they still create chaotic situations which are funny. Balancing comedic value and players feeling accomplished has been something we’ve always strived for. it’s something I think we’ve hit in stride with Dadliest Catch.

In this game you’ll get to explore more of Octodad’s world. You get to see the kind of culture surrounding his fear of being exposed, and you get to better know his family that he loves.

Besides being larger and more polished in almost every way we’ve also been trying to make sure each area in the game is worth visiting and playing in. There’s a high density of toys. Things to play with that aren’t necessarily related to any specific task other than having fun. 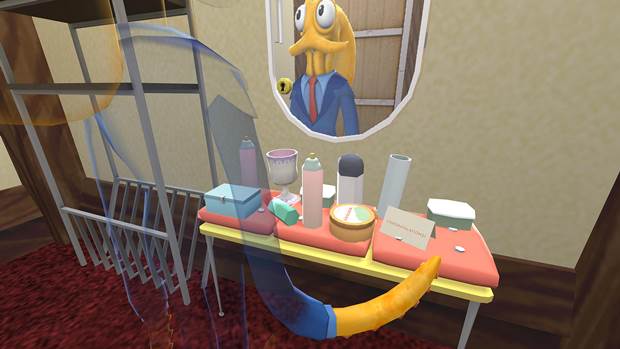 Ravi Sinha: What are your thoughts on the current state of indie gaming, with games routinely being funded through Kickstarter and big publishers like Sony taking greater and greater interest in which indie titles are featured on their respective platforms?

Philip Tibitoski: I like to think things can only get better from here. I’m sure there will be bumps in the road, as there always are, but really the landscape continues to smooth out for smaller teams and smaller games. Bigger more influential entities are becoming aware of the fact that their customers want quality and variety.

Game players are growing up and they’re looking for something new.

"I think the idea of a console "war" is something created for the purpose of drama. These consoles are competing with one another as businesses and that's completely normal. "

Ravi Sinha: In terms of power, features and overall functionality, what are your thoughts on the next generation of consoles? Do you believe that the war going on, comparing the Xbox One and PS4’s specs, will have an impact on either system in the long run?

Philip Tibitoski: I think the idea of a console “war” is something created for the purpose of drama. These consoles are competing with one another as businesses and that’s completely normal. The thing is people will go wherever their favorite games are being released, and developers will release their games wherever they think they’ll do the best.

Ease of development is something I think is more important than raw power for a console. Whatever a console maker can do to limit the amount of strife a developer has to go through to get their game made and to market should be done. It makes all the difference.

From our experience Sony has made the best possible home for small teams out of the current console landscape and it doesn’t look like that’s being matched too well by the Xbox One. Nintendo has been changing things for the better lately as well by opening WiiU up to self publishing and that’s great to see.

Ravi Sinha: Aside from Octodad: Dadliest Catch, are there any other ideas you have in mind for PlayStation 4 games?

Philip Tibitoski: Not yet. We’re focusing our efforts on finishing Octodad: Dadliest Catch up for all the platforms we’ve been developing it for. We have a bunch of ideas for future games, and even some prototypes but really what platform a game ends up on depends on what it lends itself best to. That being said we’d love to continue bringing our games to PS4 if they fit well in that landscape. It’s been nothing but a positive experience so far.