Oddworld: New 'n' Tasty is a faithful remake that unfortunately it doesn't live up to modern standards.

My first exposure to the Oddworld franchise was on a PlayStation demo disc around 1998. Back then it was “that bizarre game where you could fart”. But there was a certain uniqueness to the game that drew me in and when I obtained a full copy, I was instantly enamored. As not only one of the most challenging games I played it my youth, Oddworld: Abe’s Oddysee firmly planted a hold on the nostalgia I feel for the original PlayStation.

Oddworld: New ‘n’ Tasty is a remake of the classic side scrolling puzzle platformer. Every area has been beautifully rebuilt from the ground up to take advantage of modern hardware. This isn’t just an HD port, it is clear that a lot of time and effort went into retrofitting the game with modern graphical prowess. 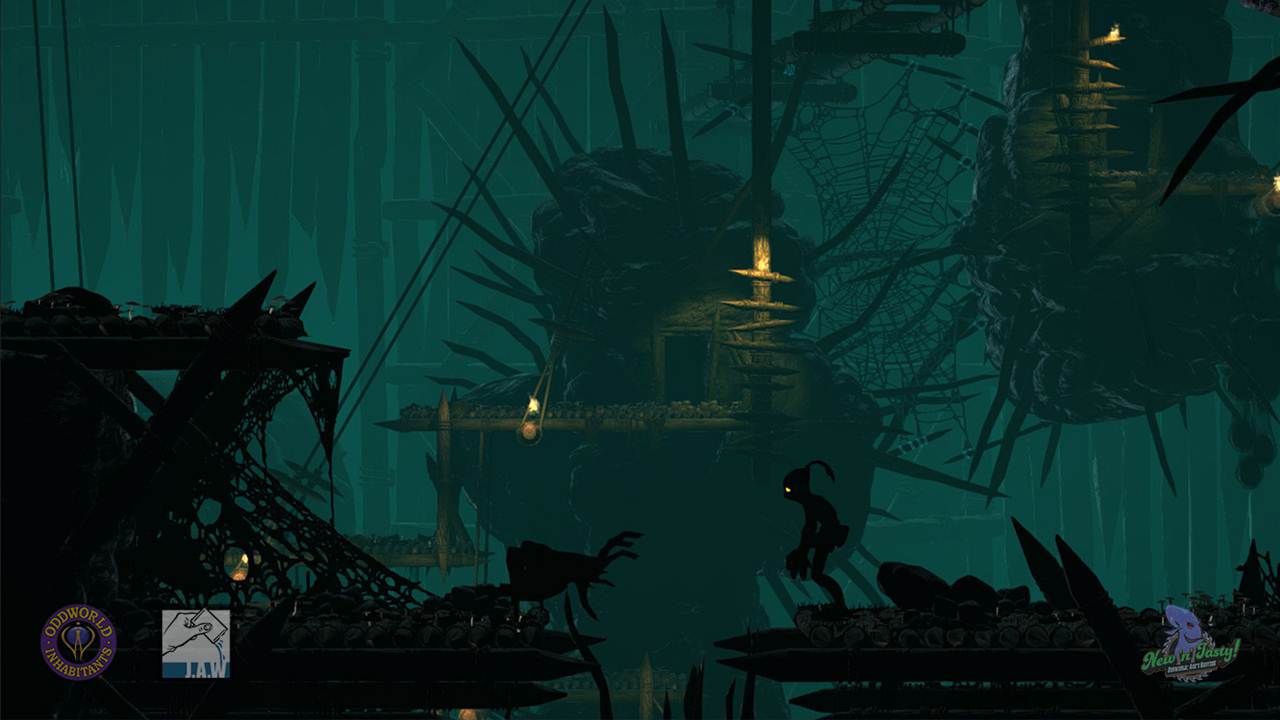 "This isn’t just an HD port, it is clear that a lot of time and effort went into retrofitting the game with modern graphical prowess. "

Unfortunately the game is rough around the edges, as I encounter numerous bugs and glitches in my playthrough, including a game ending glitch where my save was corrupted around the halfway point. Other glitches included crashing to the PS4 home page, freezing at load screens, Abe getting stuck on geometry, and a very frustrating instance where pressing a button to activate a password stone caused my character to be teleported back to the start of the level. Add to that the fact that in the opening video of the game a “Trial version” watermark  can clearly be seen in the corner for a few seconds, and it is easy to come to the conclusion that this game needed some more time in the oven.

Throughout the game players will encounter other Mudokons whom they can save by activating near-by portals with the shoulder buttons. Be careful however, as the Mudokons will mindlessly run towards the portal once its open, often times to their peril if the player hasn’t deactivated traps or cleared enemies along the way. Sometimes you will need to speak to them using the “gamespeak” feature, which is a set of commands mapped to the directional pad. With this you can communicate with the Mudokons to ask them to follow you, or stop and wait. Later on in the game this feature is used to give sequential passwords to gatekeepers in order to progress to new areas. In each chapter you are ranked on how many Mudokons you save, and if you save them all you will obtain the best ending.

New ‘n’ Tasty isn’t a game about combat, in fact there really isn’t any to speak of. Abe has no attacks, he can only run, crouch, roll, jump, wave, chant, and fart for the most part. The trick is to use these skills to navigate and solve areas and the puzzles within. The world of Oddworld is filled to the brim with monsters and machines that would like nothing more than to turn you into a neatly stacked pile of meat. In other words, you are going to die a lot in this game, and thats the way it is intended. Players will need to be aware of their environment and careful to avoid it’s many pitfalls. The main complaint I have is that it takes too much time to reload a checkpoint considering how easy it is to die. The screen can hang for almost 7 seconds at time and it really ruined the pacing for me. 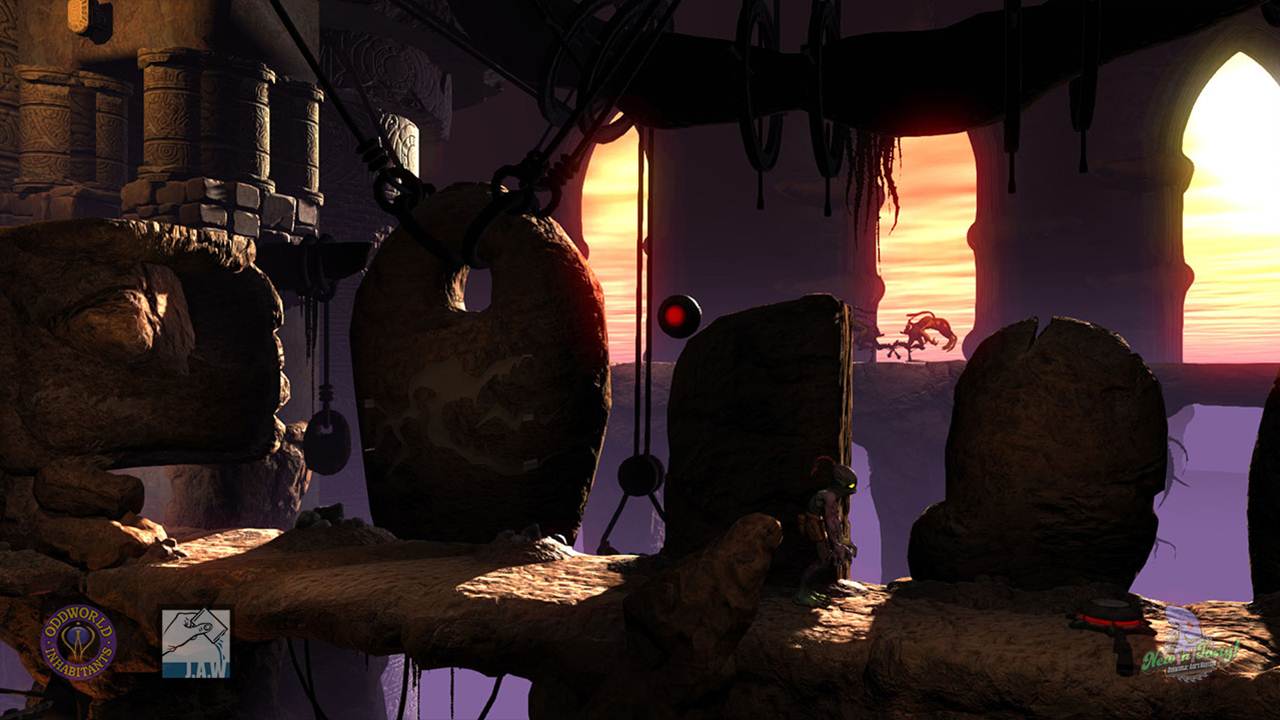 "New ‘n’ Tasty isn’t a game about combat, in fact there really isn’t any to speak of. Abe has no attacks, he can only run, crouch, roll, jump, wave, chant, and fart for the most part. "

This game comes from a time when platformers were still designed with arcade philosophies. They were sometimes unfair, or harder than usual because you paid per play. Since then, as consoles pushed the arcade market out of commission the logic has changed quite a bit on this. That isn’t to say that the difficulty of the game is a bad thing, but some sections can feel like they needed a bit of play testing to smooth them over. For instance the first two chapters seem to be some of the hardest parts in the game, with things getting a lot easier once you leave the meat factory.

Unfortunately modern side-scrollers make Oddworld: New ‘n’ Tasty feel like a dated slog. If the developers were going to remake the game for a new audience, they should have maybe included latter day side-scrolling innovations, instead of producing largely the same journey with better visuals. This is a case of being a little too faithful to the source material. The developers have also added a new leaderboard feature for speed-runners and long time fans to see how fast they can complete the game and how many Mudokons they can save, but this is one of the only new features in this remake, and it is rather disappointing.

Ultimately fans of the franchise will find this to be a faithful remake of a classic video game, but it’s dated gameplay, design philosophies, and substantial technical problems make it hard to recommend to newcomers. For such an interesting and imaginative world, it is disappointing that playing the game just isn’t very enjoyable.

Dated gameplay and puzzle design, Touchy analog controls can lead to frustration when precise movement is required, Bugs that cause the game to crash, or infinitely loop puzzles, General lack of polish.

Final Verdict:
FAIR
At the end of the day anybody who holds the original Abe’s Oddysee in high regard will appreciate this remake immensely, but newcomers to the series should be wary of it’s problems.
A copy of this game was provided by Developer/Publisher/Distributor/PR Agency for review purposes. Click here to know more about our Reviews Policy.