OlliOlli 2 is a game that pushes the aspects of challenge, timing and precision to extraordinary lengths. The game originally debuted on PlayStation 4 and PS Vita, the game has now made its way over to the PC. In much the same way that EA’s Skate attempted to rewrite the rules on game-mechanics and control schemes of how skateboarding games are supposed to be played, OlliOlli 2 does the exact same thing. While the two games differ greatly however, the emphasis being placed on how the player rides their board and launches tricks is where the game houses most of its appeal.

The game hosts six modes of play for their player to participate in: Skate park, Spots Mode, Rad Mode, Daily Grind, Combo Rush, and Career Mode, the latter of which is where the player will most likely spend the majority of their time. OlliOlli 2 is a game that focuses on two major things: delivering challenge and requiring the player’s utmost attention. Although each mode of play differs in their own unique ways,such as daily challenges and leaderboards, completing specific-set challenges, and competing online or locally, the goal of each one remains largely the same: building combos. 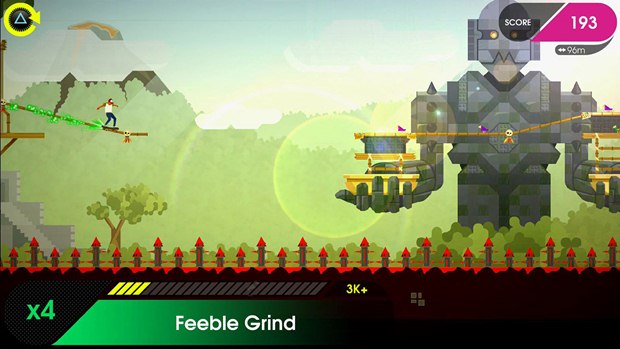 "OlliOlli 2 is a game that focuses on two major things: delivering challenge and requiring the player’s utmost attention."

Playing across a 2D side-scrolling plane, OlliOlli 2 is fast, real fast. As the game’s control scheme is heavily focused on the player’s timing and precision in pulling of tricks, chaining them together and then landing safely, which actually requires the player’s input to do so. OlliOlli 2 presents a degree of difficulty that’s fairly reminiscent of older games; 90s platformers to be more precise.

What’s great about this level of challenge is that none of it feels unfair or broken in anyway. As the design of its gameplay naturally encourages the player to move faster and faster as the game pushes forward while requiring the player to remain in control, any fault that the player may unfortunately undergo is strictly down to them failing to pay attention and responding when appropriate.

This does well in reinforcing motivation to try again and become better, especially within the game’s career mode as it’s essentially a requirement due to the game’s objectives, that must be completed in order to progress to the next level. It’s also worth noting that as with all games that place a heavy-focus around challenges and objective based-game modes, the game does increase in difficulty as the player makes their way throughout each level. 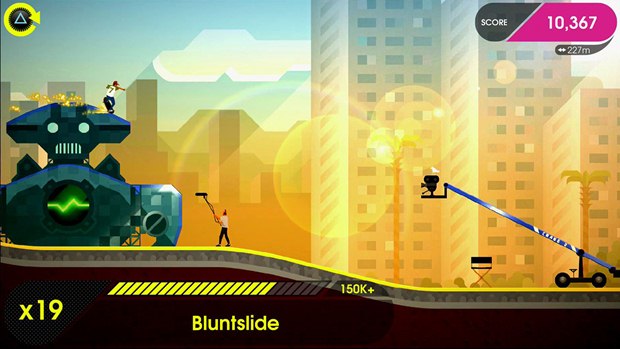 "OlliOlli 2 presents a degree of difficulty that fairly reminiscent of older games; 90s platformers to be more precise."

Taking a pixel art approach to its aesthetics, OlliOlli 2 presents something of a temptation whereby, I’d like to screenshot the most alluring level and frame it in the hallway with a panoramic aspect ratio, and feel no shame by my peers as to why I have something so ridiculously nerdy and unconventional on display. The game utilizes bold, vibrant, and neon colours with just the right amount of detail to show of its incredible level design and artistic freedom.

Ranging from many different backgrounds such as city sidewalks to theme parks, and ancient desert ruins to futuristic robotic landscapes, there’s a strong feeling of creativity flowing through each and every level that the player skates through. Combined with such an attractive and visually pleasing design, the game’s soundtrack is one that I’d gladly give my recommendation to. Which is actually plausible since it’s available for download on both iTunes and Google play. Many times when I lacked the concentration to play, I would accept the many fails and falls I would endure during gameplay, just to listen to something that was both moving and peaceful.

There’s two things in particular with OlliOlli 2 that I found to be the most captivating aspects of the game, both of which serve as a magnificent throwback to the 90s era. The first of which is the ungovernable and lawless attitude of the culture that surrounds skateboarding. Throughout the mid-90s and up until now, many skateboarding games have come and gone and while some have attempted to do new things in-terms of gameplay mechanics, the vast majority have been iterations of the infamous Tony Hawk’s Pro Skater series. 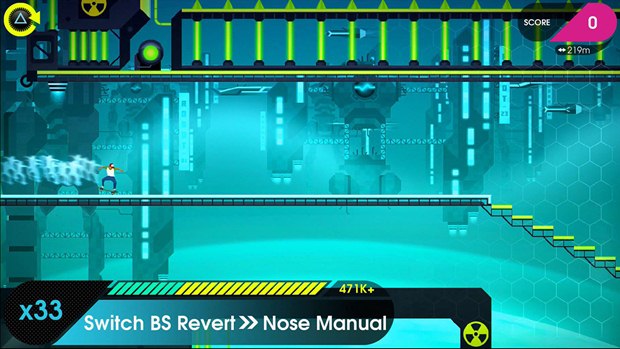 "The sense of difficulty is prevalent throughout every ramp, hill and grind rail within the levels of the game."

The second that comes to mind is the aspect of challenge that separated the boys from the men, amongst the frustrating yet enjoyable 2D side-scrollers that ruled the early 90s. While Super Mario is clearly the first that the majority of us would think of, those such as MegaMan, Ninja Gaiden, Battletoads, Castlevania and dare I say it…Sonic The Hedgehog all succeeded in delivering an immense amount of challenge. Where some placed a higher emphasis on tight platforming and dealing with enemy attacks, others added an element of speed that would either accelerate the players adrenaline or unfortunately damage the playability of the actual game: Sonic The Hedgehog.

OlliOlli 2 is reminiscent with all of the above as it places a strong emphasis on the player having to keep up their speed and maintaining momentum in order to make sure its platforming is achievable. Blending this well with an interesting control scheme whereby the player has to press and hold different button configurations, so that every single movement their character will make is in-line with how well-perfected their tricks and landings actually are. The sense of difficulty is prevalent throughout every ramp, hill and grind rail within the levels of the game. 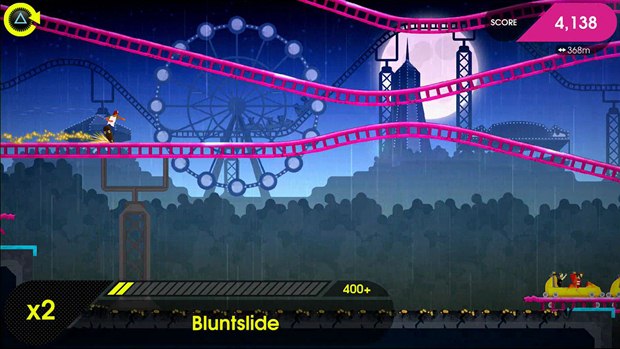 "OlliOlli 2 is the illusion of simple that’s worth the appreciation for everything it sets out to do and so gracefully accomplishes."

Although the on-screen button layout is strangely displayed in reverse and recommends to be played with a controller, the game can be played with a mouse and keyboard, and the former of which is nothing to cry home about. Since none actually came to mind, the only real problem that I can actually see with the game is something I had to scrap long and hard for from the bottom of the barrel, examining the game through a looking glass of lies. How would a possible sequel manage to take things further and prove to be more enjoyable than what’s been delivered upon here? Roll7, surprise me.

Brutal? No. Punishing? Not in the slightest. Difficult and demanding that drives you to play on and master everything it has to offer, while consistently throwing out new objectives and combo-chains while playing an exciting soundtrack that will have you pausing the game ten minutes in, so you can go off and purchase it? Yes. OlliOlli 2 is the illusion of simple that’s worth the appreciation for everything it sets out to do and so gracefully accomplishes.

Challenging but mentally rewarding and a superb soundtrack.

Not fond of difficult 2D skateboarding games? There's nothing here for you, I'm afraid.

Final Verdict:
AMAZING
Many games attempt to deliver on something that is easy to play but hard to master. OlliOlli 2 succeeds on this and literally welcomes you to prove it.
A copy of this game was provided by Developer/Publisher/Distributor/PR Agency for review purposes. Click here to know more about our Reviews Policy.