A grand adventure that feels compromised in every way possible.

Just to be clear- I don’t watch One Piece. I actually don’t even have the slightest clue what the series is about. All I know is that it is a popular anime that’s been pretty long running. Unlike the times when I was asked to review a game based on, say, DragonBall Z, where even though I did not watch the anime, I knew at least the general lore and framework of the series, I am completely clueless on One Piece. This game was in fact be my first experience with the story. And considering how well the DragonBall Z: Legacy of Goku RPGs on the Gameboy Advance sold me on the DragonBall lore, I had some expectation that One Piece Romance Dawn would do the same.

It didn’t. Well, not entirely. I guess the actual story told here was fun enough- from what I understand, it covers nearly 500 episodes of the anime- although it wasn’t told all that well, and if you were playing this game just to experience (or re-experience) the story, I’d advise you to pursue better avenues. One Piece Romance Dawn is shockingly low budget in that regard- all exposition is delivered via text and written dialog, all of it. 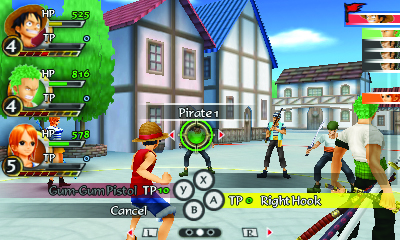 "One Piece Romance Dawn is shockingly low budget- all exposition is delivered via text and written dialog, all of it. The worst part is, for someone like me who has absolutely no familiarity whatsoever with the anime or story itself, I often find myself getting completely lost."

The worst part is, for someone like me who has absolutely no familiarity whatsoever with the anime or story itself, I often find myself getting completely lost as to what is happening, and who is saying what. I lost track of motivations too many times, simply because speech itself was so hard to keep track of, and all because, barring maybe a few occasions of full featured cutscenes, this game’s storytelling is limited to text dumps, 16-bit RPG style.

In many cases, that is endearing- for example, when a game is consciously trying to channel the classic 16-bit RPG era style. However, when a game is not attempting to do that, when it is trying to actually tell a story that’s pretty overwrought and dense, this isn’t the best way to do it. In fact, it comes off as positively cheap, as a misguided way to cut corners.

The story, thus, was a disappointment for me, mostly because I couldn’t keep track of it thanks to the game’s excessively poor storytelling. Luckily, the actual gameplay here came through. One Piece Romance Dawn is a turn based RPG. It’s not the best RPG in the world- don’t expect that. It’s not the most complex. Don’t expect that either. It’s pretty straightforward and standard, with some mechanics thrown in for token ‘depth,’ but it plays well enough that it comes off as a decent RPG, although nowhere near the cream of the crop that the 3DS has to provide in this genre. 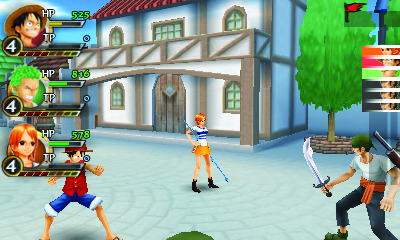 "Combined with the positional strategy, the attack combos actually add a fair amount of depth and thrill to the battle system, and make the game fun to play through, in spite of its other obvious deficiencies."

The game itself consists of dungeon exploration so you can find the treasure and move on; dungeon design is simplistic and often banal, but the visual themes of the dungeons save them from being absolutely boring, and the dungeons are short enough to where they never outstay their welcome. The ultimate aim in each dungeon is to get the treasure and move on, but of course, as is expected for a turn based JRPG, your exploration will be punctuated with battles.

Battles themselves are party based affairs. Up to three of the Straw Hats crew can be in battle at any given time. Within battle, several aspects come into play- the first is your action points, which basically limits exactly how much of anything you can do per turn. As for what you can do per turn, you can do anything from the standard attacking, using items, or running away, but positional tactics also turn out to be pretty important here. Depending on how your characters are positioned throughout the field, you get attack (or defense) bonuses or penalties, so it becomes one more thing to keep track of, and adds a wrinkle of complexity to the system.

The actual attacks are mapped to the different buttons on the 3DS, and chaining them together can unlock some deadly combos- combined with the positional strategy, the attack combos actually add a fair amount of depth and thrill to the battle system, and make the game fun to play through, in spite of its other obvious deficiencies. However, the battles can tend to drag on, and later on in the game, you might groan at the prospect of having to enter yet another battle with some enemy that will drag on. Thankfully, enemy encounters aren’t random, as all your opponents are visible on screen (even if they can’t always be avoided successfully). 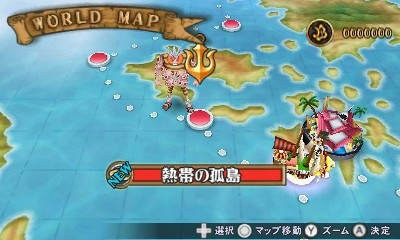 "One Piece Romance Dawn feels like it was slapped together in a hurry, and that the developers knew their fanbase was going to buy it anyway, so they really didn't put much effort into polishing it up."

It’s just as well that the game plays well, because it feels like so much of a lazy product otherwise- it feels like it was slapped together in a hurry, and that the developers knew their fanbase was going to buy it anyway, so they really didn’t put much effort into polishing it up. In addition to the aforementioned lack of cutscenes and voice acting, there are low texture models, a complete and total lack of a 3D effect- as in, it literally isn’t there. I’m all for cutting out useless gimmicks, but not having it there at all, even for some added visual oomph in the cutscenes, just feels lazy- and the bottom screen similarly gets a map put on it and nothing more. All of it just screams lazy.

Ultimately, would I recommend the game? As a complete newcomer to the franchise, I have no idea what happened over the course of the story, but i can say the battle system was enjoyable enough. I guess this game is best meant for fans of the anime, who want another excuse at revisiting the story wrapped up in some good JRPG goodness at that.

Where good JRPG goodness is a relative term. But for everyone else? Well, outside of little kids who don’t care much for the story, and just want a simplistic RPG to play, this is a good purchase. For other demographics, I don’t really see that much of a point.

Story is a confusing mess made worse by how badly it is told; complete lack of utilization of system's capabilities (touch screen, 3D effect, graphical capabilities) make it feel like a lazy product that takes its audience for granted

Final Verdict:
MEDIOCRE
If you're a One Piece fan and you want to relive the story, this game's as good an excuse as any; however, One Piece Romance Dawn is not recommended for just about anyone else.
A copy of this game was provided by Developer/Publisher/Distributor/PR Agency for review purposes. Click here to know more about our Reviews Policy.