Looking for a fist person shooter with lots of intense action ? You want tons of explosions and lots of eye appealing graphics ? You want a game that when you die, you can jump right back in and make it through a touh spot in the single player campaign ? Do you also want a military themed shooter that is like most others where you can lead the charge and rush right in and wipe out everyone in site ? Well my friend, you better go look somewhere else as you either have very little patience or and very little discipline, Operation Flashpoint: Dragon Rising, requires both.

Operation Flashpoint:DR takes place on a ficticious island off the coast of Russia. The openning cut scene gives you a brief over view of the history of the island and how it changed hands from being controlled by Russia, China and Japan. More recent years reveal that the island is rich in cude oil and then the Chinese, who have control once again, are threatening to keep it for themselves. The United States Marines are brought in to help restore order.

Now the first thing you’ll ntice is OP FP:DR looks pretty good visually. The graphics could have stood to have been tweaked a little sharper, but I suspect that might have had to be sacrificed to make room for the massive open world the game takes place in. Don’t take this the wrong way, the game looks good, but you can see where there is room for improvements. Everything in the distance looks really sharp, but approach a bush or walk through a thick open area and vegitation seems to take on a 2-D look.. The shooting and the action is intense

Now lets get this out of the way – the computer controlled A.I. – This is a hit and miss though out the game. So far after about five hours of play, I’ve come across situations where the enemy’s AI is outstanding or at least somewhat alert to my squad’s presence and open fire on me and my squad. Most times when walking from ‘point A’ to ‘point B’ riflemen and turret gunners are spotted. Even as far as 200-300 meters they pose a threat. Other times I’ve come across ememies just standing there clueless like a statue just feet away.Even your own squad on occassion will all of the sudden come up missing for whatever reason. You’ll pull up you map and notice that they are way behind you as if they’re like a  bunch of kids at the zoo who stopped to watch the monkeys when you’re suppose to be heading over to the exotic bird show that starts in a few minutes. The squad is almost totally reliant on your commands. You’ll pretty much always have to give the ‘Follow-me’ command just to get them to keep up and on task. They are pretty good at firing at enemies and actualy do mannge to take out a enemy or two. You have many other commands, you can have them advance onto a certain position, assault a building like a SWAT team, give suppressing fire on an enemies location allowing you to flank them. Another really bad AI situation is if you and your squad are in a vehicle and you get out, they won’t get out and follow you unless you give the command to ‘exit’ or ‘follow-me’.

Now there is a level of realism here – if you get shot, depending on where and how severe the wound, you may need to find cover real fast and apply a field dressing to prevent yourself from bleeding to death. A shot in the leg will cause you to loose the ability to run or sprint, which makes sense. When you get shot, it’s best to check the meter in the lower left corner of the screen to see how bad the injury and how fast is the blood flow. If it’s not too bad and the blood is flowing at a slow rate, you can hang in the fight for a bit and try to take out the enemy and reduce the threats you are facing and THEN apply your field dressing. Although, you must be careful of your surroundings and what your using for cover. If your head is exosed, there is a chance you could catch one in the melon, and there’s no asprine  that works that fast. Your 4 man squad does have a desgnated medic, you want to keep an eye on this guy and make sure he stays alive. Reason being, you can comand him to heal other members of the squad who has sustained injuries, and occassionaly you’ll take a shot that incompsasitates you. You won’t be able to reach you’re equipment to get a field dressing yourself, but you can call for you medic to come to your position and heal you. Just hope you’re not lying out in the open so while he’s trying to heal you, he ends up getting shot him self. You also have the ability to heal your squad member, good luck though, trying to get close enough to apply the field dressing is like playing tag with them. 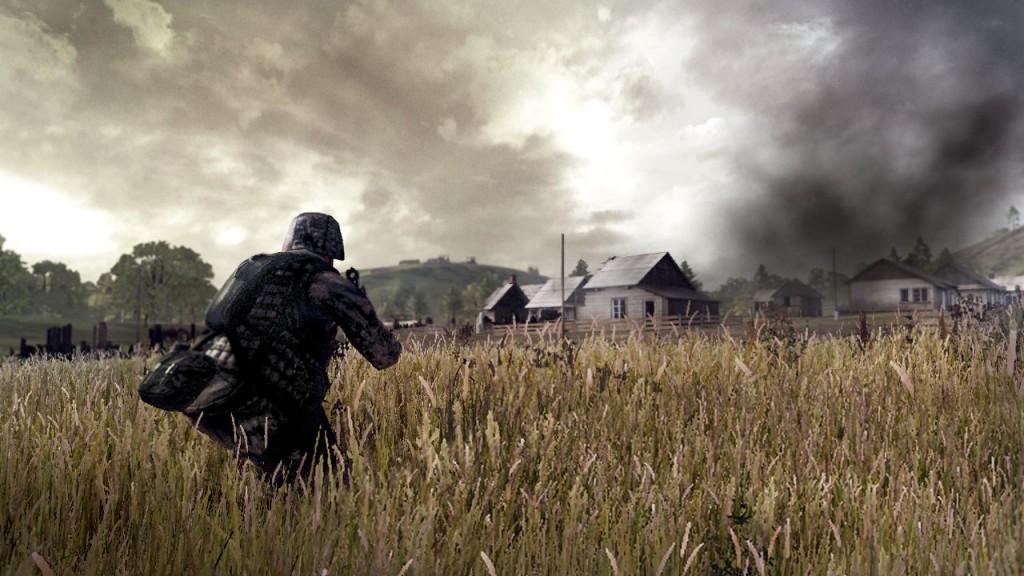 There are many different weapons available through out the game and you are able to carry quite the load. You have your main rifle, then a secondary weapon that could be another rifle or some sort of rocket launcher, two different types of grenades (frag and smoke),  a pistol, the aforementioned field dressings, and binoculars. Your primary weapon will fall into two different classes- assault or marksman. The difference really is the marksman class equips your rifle with a scope making long range shots more accurate. The assault version is the same rifle and uses the premounted iron sites, which are better for close range shots. You rarely find yourself in many situations where enemies are that close and will feel more comfortable when you have the scope mounted on your rifle. You’ll come across stacks of ammunition crates thoughout the island where you can pick up other weapons and ammo, or swap out weapons, or pick up ammo from fallen enemy soldiers.

In addition to the small stock of weapons on your back, you do also on occasion get the chance to call in air strikes to take out armored vehicles and personnel from a safe distance. This task is at times nessecary to allow your troops pass through certain areas with little or no resistance from the enemy. Using the binoculars is the best way to make sure you call in the right coordinates as you can zoom in better from a safer distance, reducing the enemies from firing on you before you’re in better range. 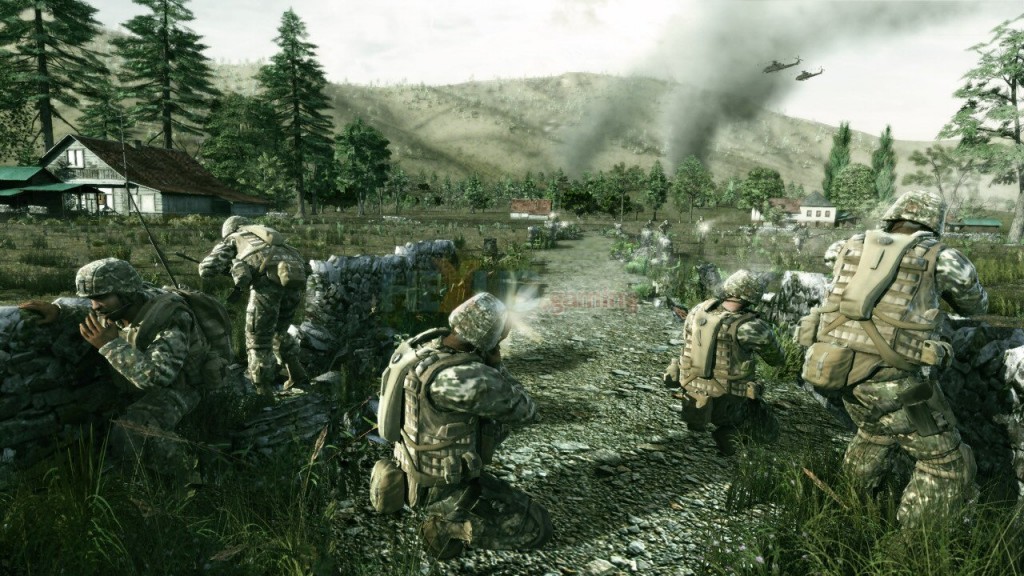 Online is a lot of fun

The single player mode basically takes you from checkpoint to checkpoint. Should you get killed or fail the mission, you have the option of starting the mission over or starting from the last check point (depending on the situation, not always the best choice). Don’t worry if while advancing to a check point that you loose a member of your quad, they all respawn with you when you reach the next check point.  Aside from the single player mode, there is co-op play also with 3 other players over Xbox Live and Playstation Network, there is also a versus mode that puts two teams of four players against each other.

Overall, if you’re into a military based FPS that is more of a tactical style game play, this isn’t the worst game you’ll ever play. May not be the greatest, but I’m enjoying it so far and have a hard time stopping after every mission.  If your style of play is more of a ‘run-n-gun’ game plan, better look elsehere for that excitement.

Very difficult to see enemies during night misions, AI at times not existant

Final Verdict:
GOOD
If you're into a military based FPS that is more of a tactical style game play, this isn't the worst game you'll ever play.
A copy of this game was provided by Developer/Publisher/Distributor/PR Agency for review purposes. Click here to know more about our Reviews Policy.