Ori and the Blind Forest Review – A Magical Mystery Tour

It’s a rare thing indeed that after a brief time playing a new game, you can’t wait to step back into that magical world and experience it again. Even after a number of hours, with abilities unlocked, obstacles traversed and amazing environments and secrets unearthed, the lure to continue this epic tale of Ori and the Blind Forest is just as strong.

To suggest that Moon Studios’ creation is little more than an old school, side-scrolling 2D platformer would be an injustice. After four years in development, the end result is a compelling game so poignant and enjoyable that it would be an absolute tragedy not to play it. Expect this one to soak up the accolades at any upcoming awards ceremonies.

Powered by the Unity Engine, Ori and the Blind Forest’s art style is exquisite. Every screen is unique and crammed with wonderful shading and colour, with depth and perspective disguising its 2D origins. It’s full HD, runs at 60FPS, has no load times and is a visual treat. 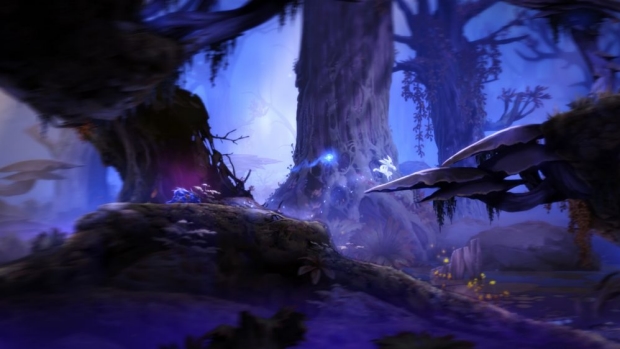 "Precise control and movement make Ori’s navigation of each level a joy. Failure to land on a hovering platform or avoid an incoming projectile is the fault of the gamer, not the game.

Equally, its haunting musical score combines well with narration delivered in an indistinguishable and haunting language (that is fortunately subtitled), adding to the atmosphere and creating a most memorable experience.

Ori is a spirit guardian – a small white long-eared creature oozing cuteness and naivety – that is given the unenviable task of exploring a beautiful yet dangerous forest to escape the evil clutches of Kuro the giant owl. Accompanied by a glowing blue orb companion called Sein, the emotional narrative sees Ori faced by hazardous jumps, seemingly impassible chasms and all manner of critters intent on stopping our imp-like hero.

Precise control and movement make Ori’s navigation of each level a joy. Failure to land on a hovering platform or avoid an incoming projectile is the fault of the gamer, not the game. The path is often blocked, requiring puzzles to be solved or missing stones and emblems to be reunited with a locked gate. Gradually a giant map is exposed; a veritable playground for our small hero.

Although some tasks may initially seem tricky, Ori’s many upgradeable abilities suddenly make the impossible possible. Ability Points are quickly collected and can be spent on three very distinct strands of a skills tree, making Ori a little stronger and opening up otherwise inaccessible areas. It’s this factor that is a truly remarkable achievement; Moon Studios’ clever level design means that one moment you can be truly stumped about how to progress, unable to leap to a far-off platform or open a locked door, only to earn an upgrade that makes it all so simple. 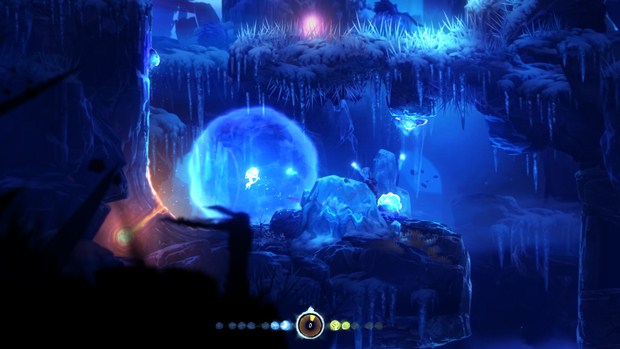 "Things can get incredibly tricky in places – especially during sections with loads of enemies or areas where rapid and precise jumps need to be made.

Ori is initially limited to leaping small distances and is vulnerable to attacks, for example, but soon gains the ability to double jump – opening many new routes to explore. Perhaps the best upgrade, however, is the “Bash” move – where you can hold the Y button near lanterns or enemy projectiles to slow time and launch yourself or the shot in another direction. It may take a few attempts to master but this mechanic is a clever tool for moving about the screen, smashing barriers or defeating the bad guys. Brilliant.

Things can get incredibly tricky in places – especially during sections with loads of enemies or areas where rapid and precise jumps need to be made. Death sets you back to your last checkpoint and although it won’t end your game as there’s no set number of lives available, you may find yourself having to retread plenty of  old ground. It pays then to save frequently – which  can be done by holding the B button whenever you wish, as long as you have collected enough blue orbs. However, a badly-timed save can make things even trickier if you keep respawning in a precarious position!

The woodland creatures you come across all have their own attack patterns and dish out a fair amount of damage. Some strategy will need to be employed to beat each of them or use their attacks to your advantage – breaking through walls or helping you reach high platforms. Equally, Ori does not fare well against water unless you’ve unlocked a certain ability, the spiky vegetation that eats away at your health bar or cunningly disguised traps. 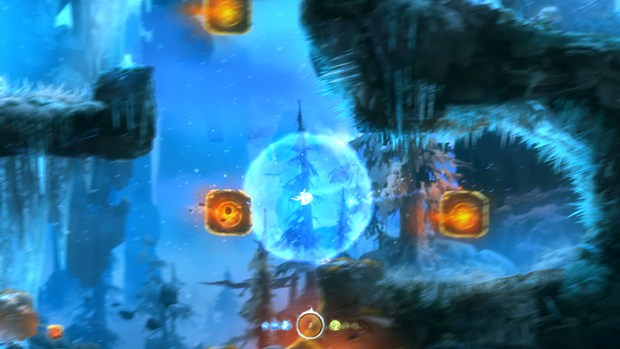 "Ori and the Blind Forest is an absolute gem and perhaps my game of the year so far.

Some timed escape sequences will also have you tearing your hair out in frustration and will likely require repeated attempts – but prove hugely satisfying when you eventually complete them. They do jar a little compared with the rest of the game but it sure adds some additional excitement to the proceedings and gets the adrenaline pumping!

Ori and the Blind Forest is an absolute gem and perhaps my game of the year so far. Fun, absorbing, emotional and cleverly designed, this is a game that should definitely be added to your library. Highly recommended.

Great-looking game with a solid storyline that tugs at the heartstrings. Visuals and audio are top notch, just like the gameplay. Precise movement, great abilities and upgrades, and an intriguing world to explore.

It ends. Can be incredibly tough and frustrating at times, especially if you mis-use a save point. The timed escape sequences jar a little.

A beautiful and memorable 2D platformer that will linger in your memory long after completion.

A copy of this game was provided by developer/publisher for review purposes. Click here to know more about our Reviews Policy.
Tagged With: Microsoft, Moon Studios, Ori and the Blind Forest, xbox 360, Xbox Live, Xbox One