The latest offering from Ubisoft and Housemarque, the guys behind Super Stardust HD, is a retro-style 2D platformer with a twist. At first sight, it looks like all those other side-scrolling games from years gone by – but perhaps with a slightly more arty feel. There are hints of Castlevania, Brink, Metroid, Limbo… the list goes on, but it’s probably best described as an amalgamation of Arabian platform romp Prince of Persia and the classic shooter Ikaruga.

Outland employs the same clever mechanic seen in Ikaruga on the Dreamcast, Gamecube and more recently, the Xbox 360. To put it simply, the protagonist can harness the powers of light and dark, good and evil or whatever else you want to call it, to get from one end of the level to the other. In practice this sees our hero change colour from red to blue and back again depending on the environment and the enemies he faces. While he can absorb bullets of the same colour, the bad guys only take damage if he is the opposite polarity. Cue plenty of rapid button pressing and tricky manoeuvring to be the right colour at just the right time… There’s something hugely liberating about being completely impervious to projectiles just by selecting the right hue and watching as our protagonist simply absorbs the bullets without damage.

Your chameleonic character is charged with roaming a huge world looking for a lost Shamen in the hope of explaining these weird visions he’s experiencing. Along the way the hero learns about an ancient conflict and realises that only he can bring it to an end. It’s all about mythology and folklore, brimful of huge beasts and devious puzzles. Switches need to be flicked to operate doors, platforms can only be operated when you’re a certain colour, coins can be collected and treasures discovered. Plenty of sprinting, sliding and swordplay are necessary to progress, with new abilities quickly unlocked to help make your travails a little easier. Coins also allow you to power up your character by increasing your health and so forth.

Restore points are plentiful, which is ideal seeing as you’ll no doubt be dying aplenty. The beasts that populate this land vary from slow moving mutant spiders, dragonflies that spew bullets and speedy explosive bugs – and that’s before you even encounter the awesome screen high bosses who require multiple hits and plenty of cunning to defeat.

While the game is great fun to play, it does retain the frustrating nature of sidescrolling platformers from yesteryear. No matter how much health you have, there will be many platforms, spikes or creatures that repeatedly see you drain all your energy in your fruitless attempt to get past. With those aforementioned respawn points sometimes some distance away, it can be hugely irritating to have to negotiate the same old bits of map time and time again. And therein lies another issue… the backtracking. As is always the way, switches do have an annoying habit of being at one end of a map with the door they operate being at the other end. 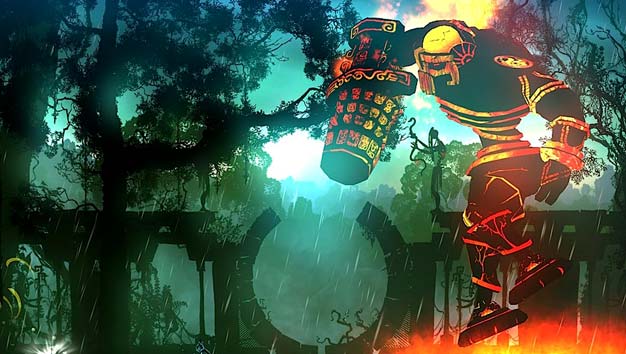 The huge bosses can be incredibly tricky

Fortunately, there’s loads to look at as you wander about and aesthetically it’s pretty appealing. In fact, it’s almost minimalist with its backgrounds of greens, browns and blacks interspersed only by the red and blue bullets, baddies and barriers that you have to overcome. Thankfully, the controls are reassuringly simple, which certainly provides an instant pick up and play appeal. There’s basically a button assigned to jumping and another for swiping your sword, but combined with the D-pad, you can slide and perform all manner of moves and more powerful  attacks – not that I’ll spoil these for you now but, suffice to say, the hero will be able to dish out some devastating blows along his journey.

With the strong mythological narrative that runs throughout, great graphics and sound, it has an almost addictive quality that encourages you to keep on playing. It’s not the longest of games, coming in at maybe five to seven hours but there’s the added bonus of an online co-op mode to add a little spice to proceedings. The multiplayer options and a few challenge modes make this a package that’s certainly worthy of the price tag.

Addictive gameplay and clever light/dark game mechanic make Outland extremely compelling. It looks awesome and is well worth the money.

Can get repetitive and the story is a little daft. There's also maybe a little too much backtracking and coin collecting for some tastes.

Outland is a surprise package that perfectly combines two gaming greats: Prince of Persia and Ikaruga. Fans of sidescrolling 2D platformers should rejoice.

A copy of this game was provided by developer/publisher for review purposes. Click here to know more about our Reviews Policy.
Tagged With: Outland, ps3, PSN, Ubisoft, XBL, xbox 360