Overwatch 2 is nearly here and feels very familiar. What are some of the major differences from its predecessor? Find out here.

After first being announced in November 2019, Overwatch 2 finally launches on October 4th for PS4, PS5, Xbox One, Xbox Series X/S, PC, and Nintendo Switch. It’s seen several changes from the original plan. Instead of a full retail experience at launch, the game is launching as a free-to-play early access title with the story campaign and Hero Missions rolling out later (the current plan is 2023).

However, even though PvP is the sole focus right now, there are plenty of differences between Overwatch 1 and 2 that you should know, especially since the first game will be unplayable after October 2nd. Let’s go over 15 of them here.

Right off the bat, the user interface has been revamped, from the main menu to the HUD for heroes. Everything, from the health bar to the action icons, looks cleaner and sleeker. The kill feed in the top right corner is a bit smaller and the Scoreboard has seen a rework. Along with Eliminations, Assists, Deaths, Damage, Healing and Mitigated Damage, various heroes have other stats that are tracked. For Mercy, this includes Blaster Kills, Damage Amplified, Valkyrie Damage Done, and so on with others still to be implemented. How this will change further from the recent beta remains to be seen. 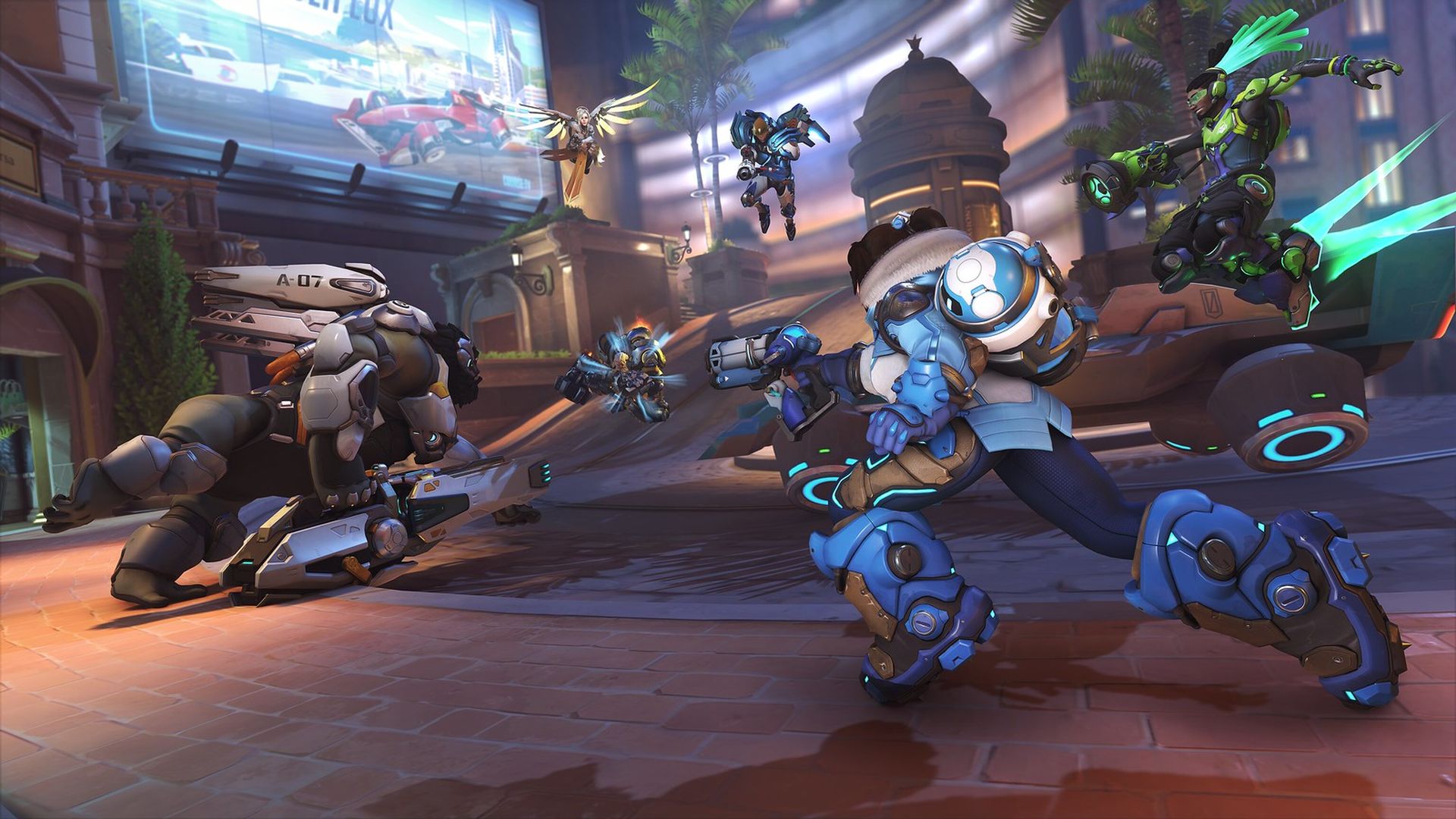 In Overwatch 1, there are shortcuts to have your hero issue commands like attacking or defending the objective, denoting Ultimate charge, or demanding healing (like, constantly demanding). Overwatch 2 introduces pinging, which lets you press a button and indicate an enemy’s position, an objective or a possible spot where enemies could attack from. You can still bring up voice lines for falling back, defending, attacking, and so on by holding down the ping button and selecting a response from a dialogue wheel. Even better, other players can look at whatever you’ve pinged and press the ping button in response to acknowledge it. 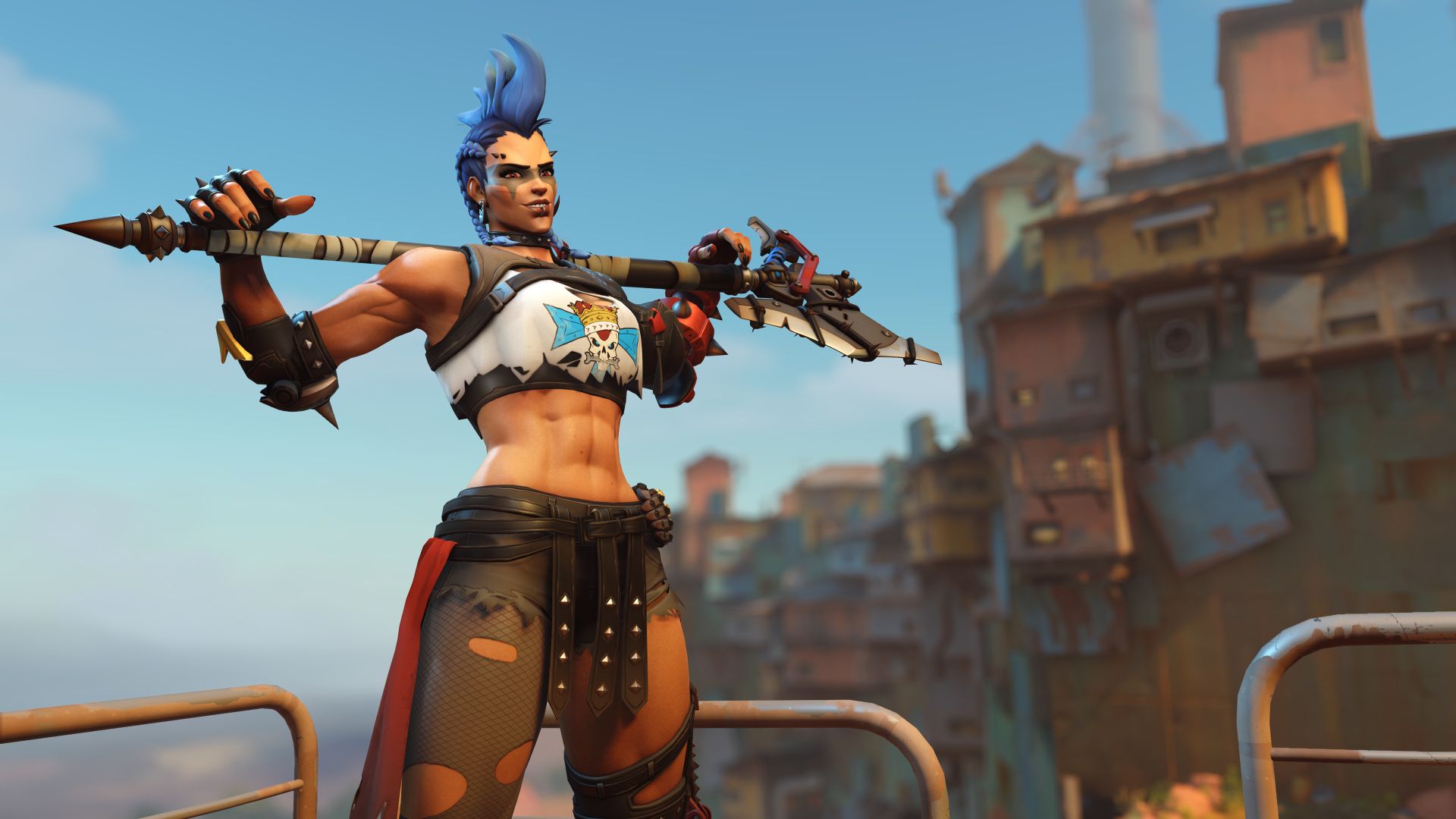 The last major hero that Overwatch 1 had was Echo in April 2020. When Overwatch 2 goes live, three new heroes will be available – Sojourn, Junker Queen, and Kiriko. Sojourn is a DPS hero with a primary assault rifle – dealing damage with it charges a railgun, which fires devastating shots. She can also power slide and deploy a slowing field while her Ultimate, Overclock, allows for firing multiple railgun shots in a short window.

Junker Queen is the newest tank, wielding an axe, pump action shotgun, a knife that can be thrown and recovered (pulling any enemies stuck with it), and Commanding Shout to grant temporary HP and speed to allies. She can also inflict Wounds, which stop incoming healing for affected enemies (with her Ultimate, Rampage, hitting multiple foes in a straight line), and recover HP from wounded foes.

Kiriko is the newest revealed hero. As a Support character, she can grant temporary invulnerability and cleanses debuffs, teleport, wall-climb and target allies to heal them. Her Ultimate, Kitsune Rush, will increase the movement, attack speed and cooldown of allies that walk its path. She can also throw Kunai, dealing an insane amount of damage per headshot. 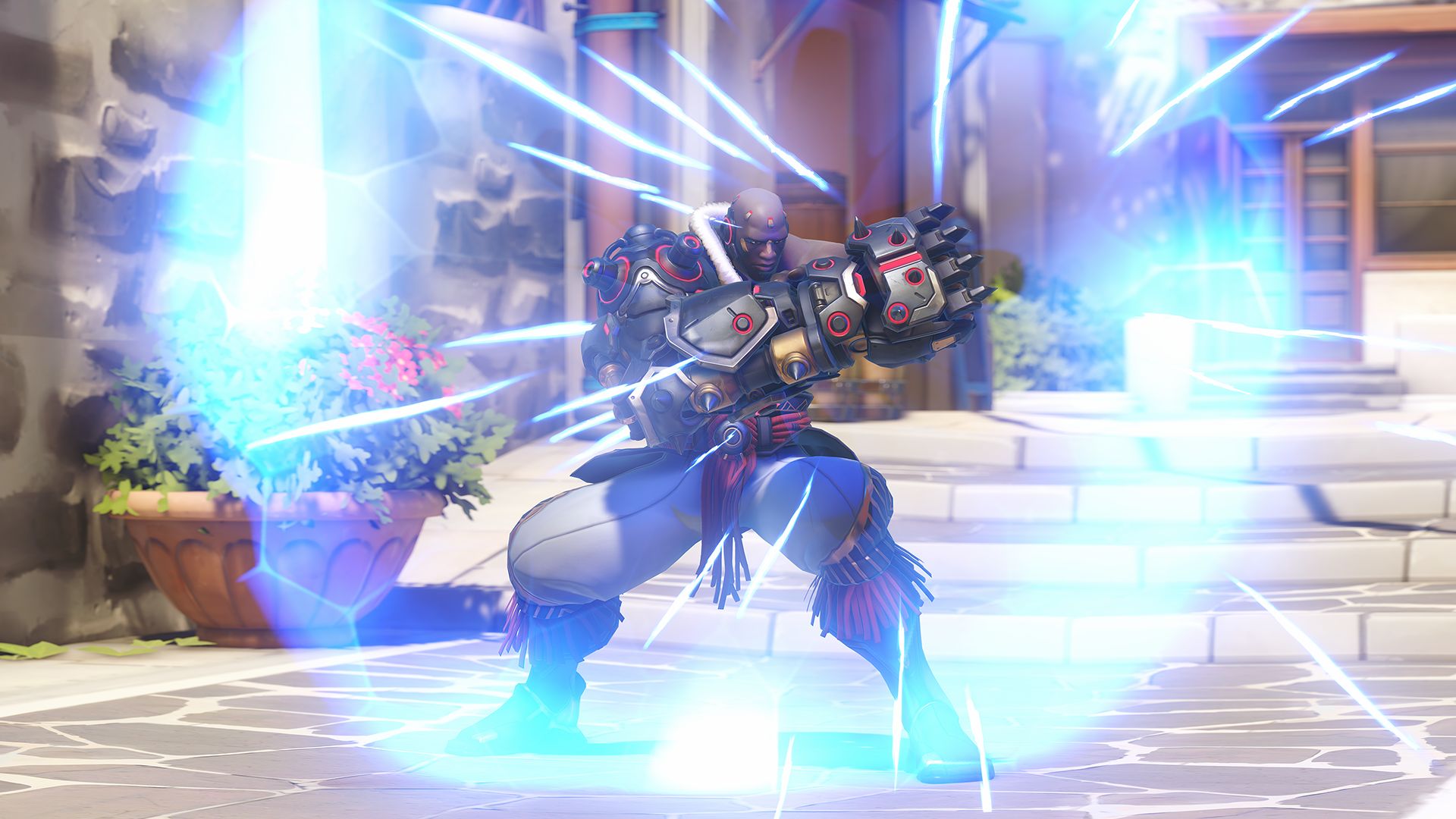 It’s not just the addition of new heroes – older heroes have seen some major sweeping changes. Mercy’s Guardian Angel has seen some significant changes (for better or worse); Cassidy now throws a sticky bomb instead of a flashbang; and Reinhardt has two Firestrikes and can cancel his charge. Zenyatta’s melee now deals 50 damage and knocks back enemies. Heroes like Bastion, Sombra, Doomfist (who’s now a Tank) and Orisa have also had their kits reworked entirely. This is all aside from Supports now having passive health regen, DPS retaining 30 percent of Ult Charge when swapping (and no longer getting bonus movement speed), and Tanks providing less Ult charge when taking damage. 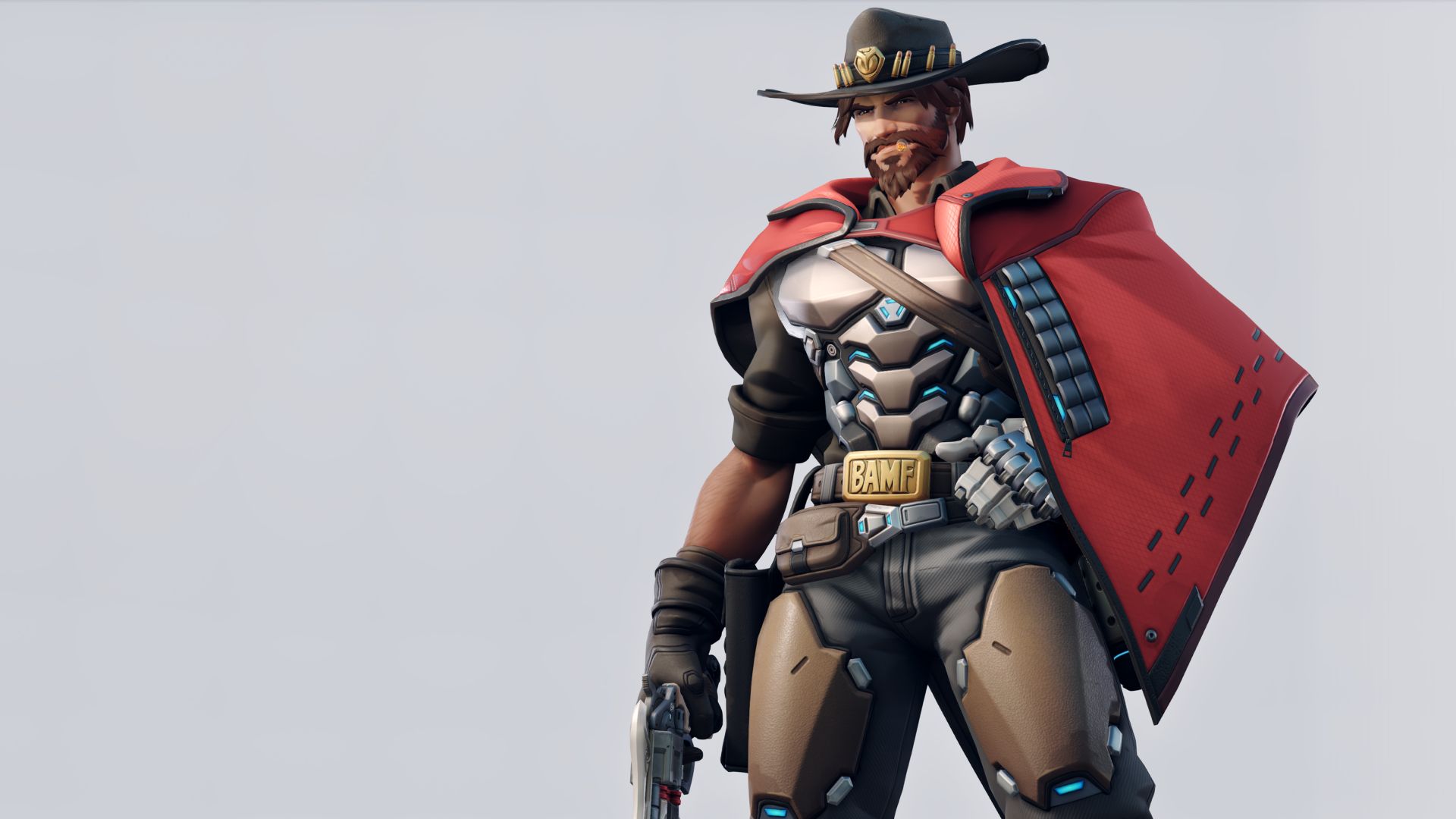 Over the years, Overwatch has been just as much about counter-picking and hard countering certain heroes as much as abusing a certain meta composition. To that end, Blizzard will reduce hard counters in its future hero designs. Instead, Overwatch 2 looks to offer a “broader range of effective hero picks,” each with “clear strengths and weaknesses” but that will be “viable more often.” Some heroes will still be very effective against others though, so you might want to think twice before running Pharah against Ashe or Sojourn.

Of course, the biggest change in Overwatch 2 is that matches are now 5v5 instead of 6v6. Each team only has one Tank, two DPS and two Supports. For this reason, Tanks feel much stronger than their Overwatch 1 incarnations, though some like Roadhog and D.Va could use a few adjustments. As it stands, the sole Tank now has more responsibility and can have a bigger impact on matches than ever before. 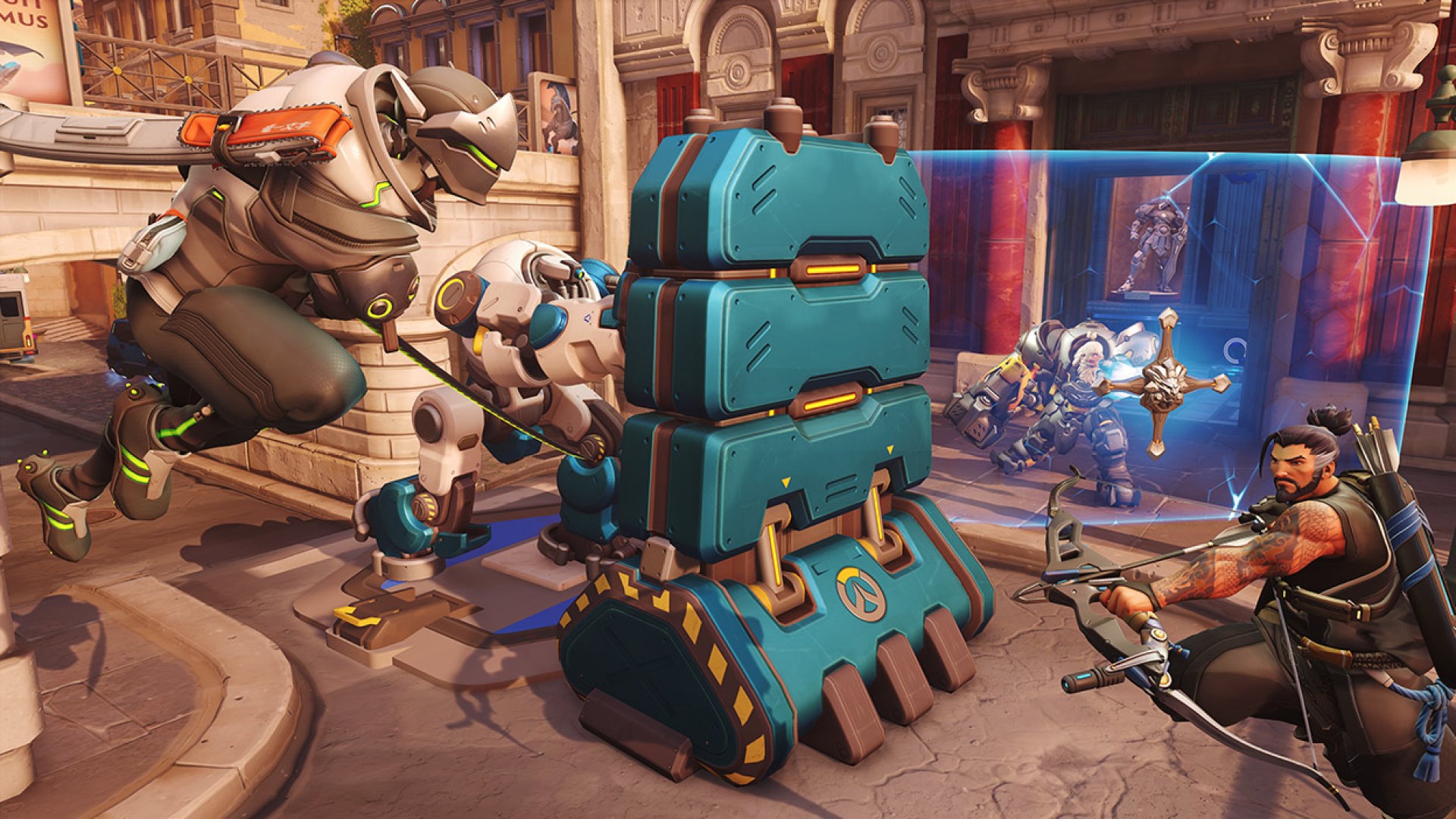 Assault aka 2CP is gone (good riddance) and a new mode has been added with Push. It’s essentially Overwatch 2’s version of VIP Escort – a massive bot sits in the centre of the map, pushing a barricade. Teams must escort the bot to various checkpoints to complete the map and win, failing which the one with the most progress is the winner. Though it initially felt weird in the first beta, Push has become a more high-octane, back-and-forth affair that supports seemingly impossible comebacks.

Plenty of maps from Overwatch 1 will be featured in Overwatch 2 like Dorado, Route 66, Watchpoint Gibraltar, Hollywood, King’s Row, Nepal and so on. Some will have different times of day, though this doesn’t seem to have too much impact on the gameplay (aside from looking pretty). In terms of new maps, there’s Circuit Royal for Escort; Midtown and Paraiso for Hybrid; and Colosseo, New Queen Street and Esperança (the new Season 1 map for Push). 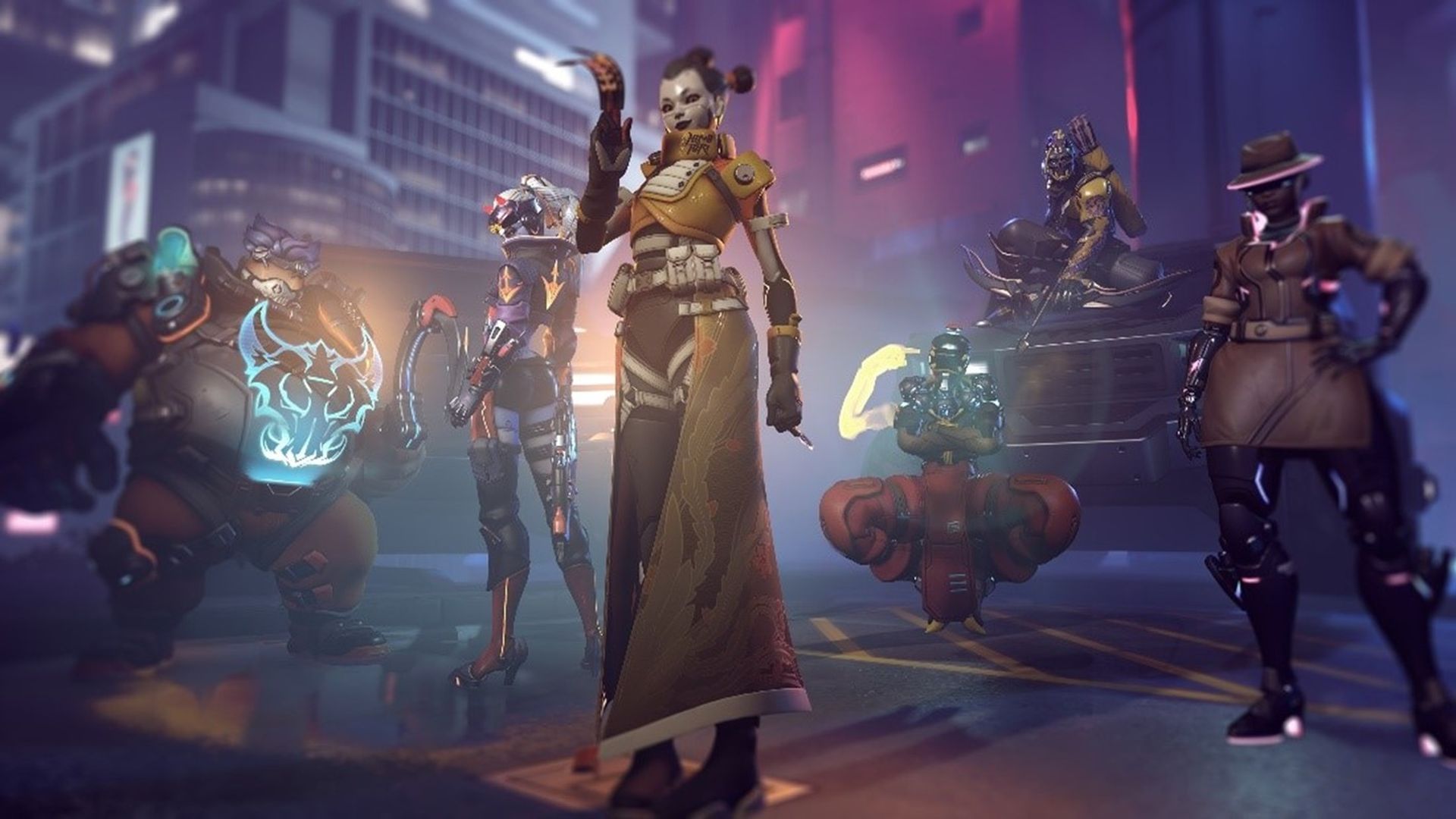 Maps, new heroes and events have followed a mostly predictable release window in Overwatch 1. But Overwatch 2 will be packing its content into Seasons. For example, Season 1 will feature Junkenstein’s Revenge: The Wrath of the Bride from October 25th to November 8th and the launch of a new Support hero, Kiriko. Each season also has a specific theme. Season 1 is Cyberpunk, which is reflected in the seasonal Mythic Skin and new Legendary Skins. A new hero will release every alternate season while new maps launch in the seasons between. Season 1 and 2 are the exceptions, which means a new hero will launch in Season 4 (which is currently slated for April 2023). 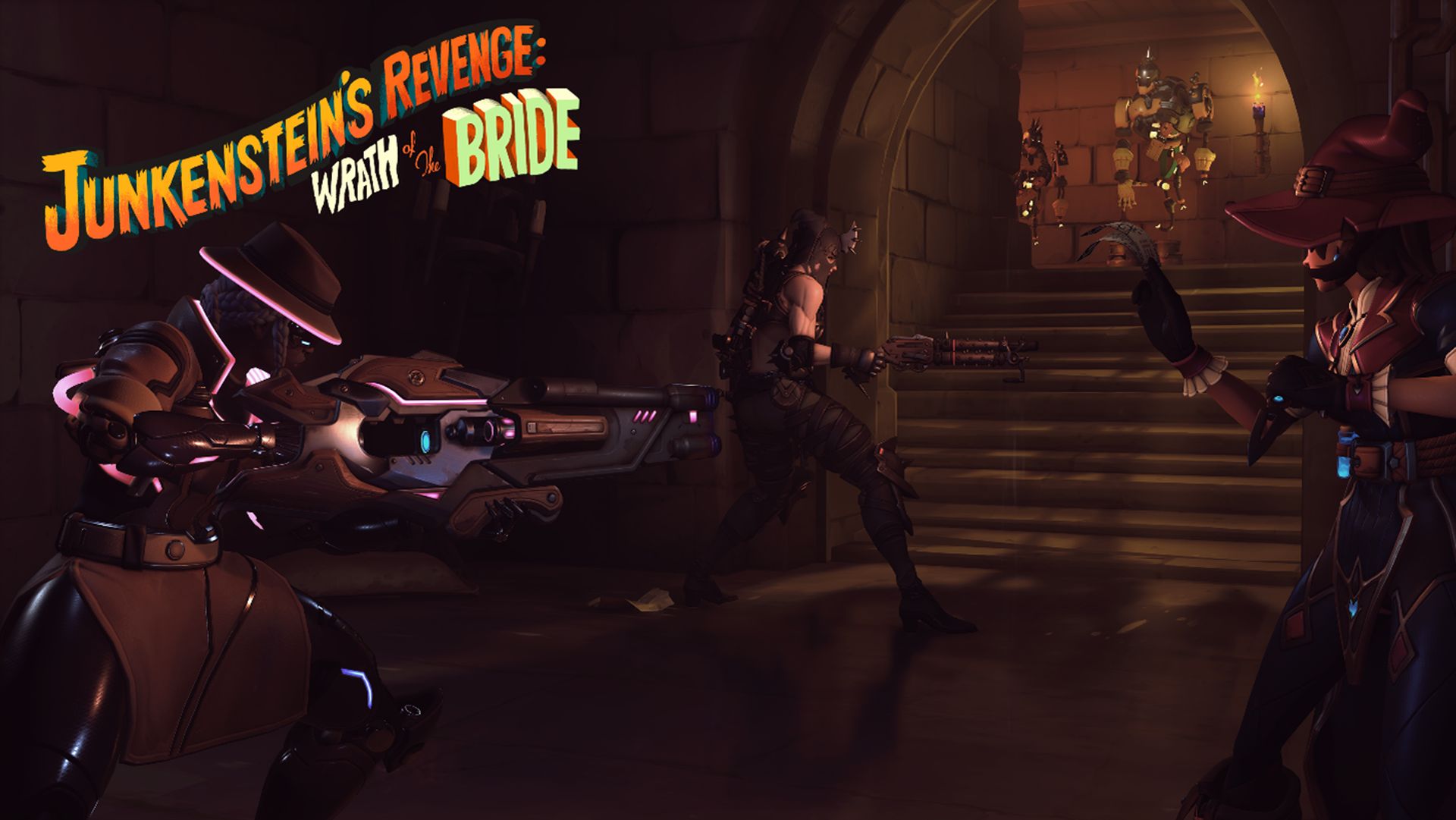 As noted previously, Junkenstein’s Revenge is returning with “Wrath of the Bride,” and though its changes haven’t been detailed, Junker Queen, Sojourn and Kiriko will each get a new Halloween skin. While the development team plans to revisit previous limited-time events, it will also add new ones down the line. Previous seasonal content (aka cosmetics) may also be made available to purchase from the store with Overwatch Coins, the new premium currency.

It’s official – Loot Boxes are dead. The Battle Pass is your means of earning certain new cosmetics. As with every other Battle Pass in existence, there’s a free track and a Premium Track. The former provides 20 tiers of cosmetic rewards, from new Epic Skins and Weapon Charms to Souvenirs, Highlight Intros, emotes, name cards, and sprays. The Premium track costs $10 or 1000 Overwatch Coins and adds 60 tiers of rewards, from Legendary Skins and Play of the Game Intros to a 20 percent boost to Battle Pass XP and Mythic Skins. Mythic Skins are highly customizable, taking different shaders and having interchangeable accessories, as seen in Season 1’s Cyber Demon Genji skin.

Once you’ve hit Tier 80 on a Battle Pass, XP will go towards Prestige Tiers which confer unique hero titles for your name card. Certain Prestige titles are only available in their season, and you won’t get one for every Tier, but they’re something for the most dedicated players to chase. 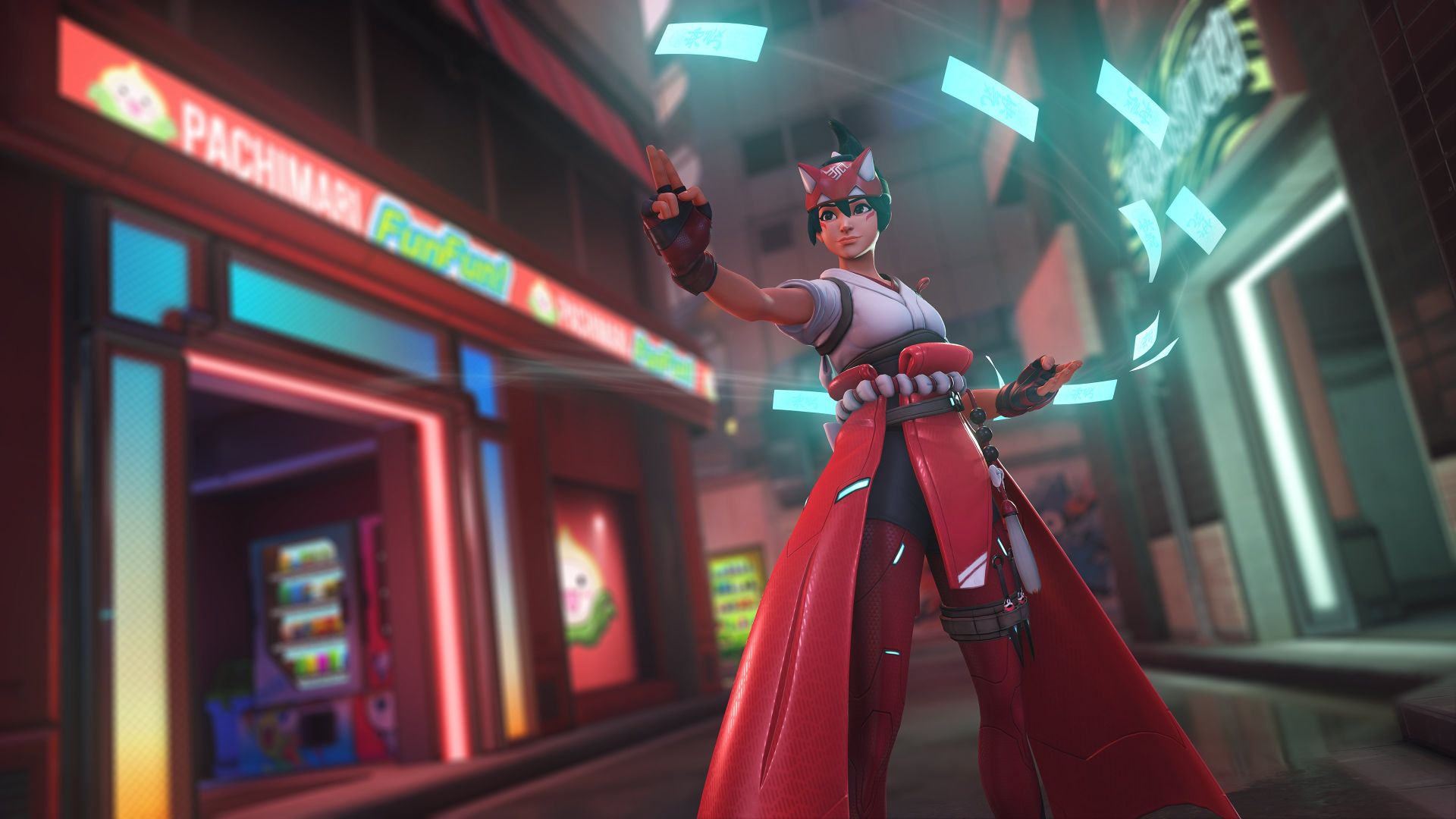 Of course, that’s not all. Season 1’s new hero, Kiriko, is locked behind the Battle Pass and that’s going to be the trend going forward. If you’re a free player, then you need to grind to Tier 55 in the Battle Pass to unlock the newest heroes (aside from Sojourn and Junker Queen, who will be available immediately). Those who upgrade to the Premium Pass or claim the Overwatch 1 Founder’s Pack gain instant access to Kiriko.

To provide time for players to unlock new seasonal heroes and also make balance changes, they’ll be introduced to Competitive Play two weeks after the season launches. If you don’t unlock a hero during a season, they’ll become unlockable later via hero challenges or by purchasing them in the shop for Overwatch Coins.

All heroes are still accessible in No Limits, Custom Games, the Practice Range, Mystery Heroes, Mystery Deathmatch and other modes along with “special modes.” So if you want to try a new hero out before buying or grinding, then go for it. 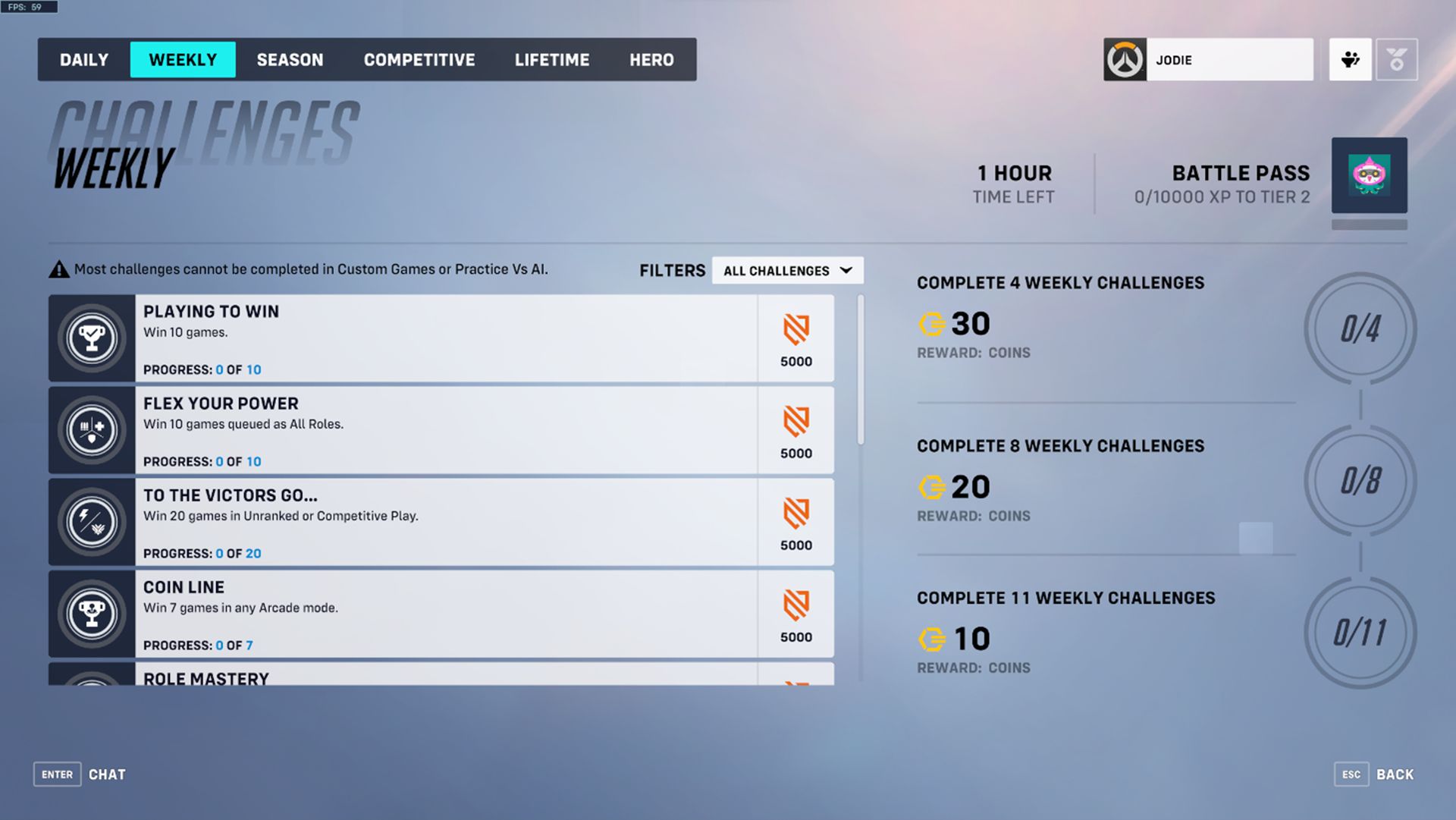 In addition to gaining XP from completing matches, Overwatch 2 is introducing daily and weekly challenges. The latter include conditions like winning 10 games, winning 10 games when queued for All Roles, winning seven games in any Arcade Mode, and so on. Completing a certain number of weekly challenges awards Overwatch Coins, so you could theoretically earn enough to purchase new heroes or even the Battle Pass over time.

Overwatch 1 didn’t have a “store” per se – instead, players could purchase loot boxes or Overwatch League Tokens through their respective digital storefronts. That’s all changed in Overwatch 2. All premium purchases are organized into a dedicated in-game store.

Along with rotating bundles (which include items from the previous game), there’s a “Just for You” section with personalized items based on the heroes played and types of cosmetics equipped. Credits from Overwatch 1 carry over into Overwatch 2 and can be used to unlock some new cosmetics (including skins for the new heroes). But the store will require Overwatch Coins to purchase new skins. 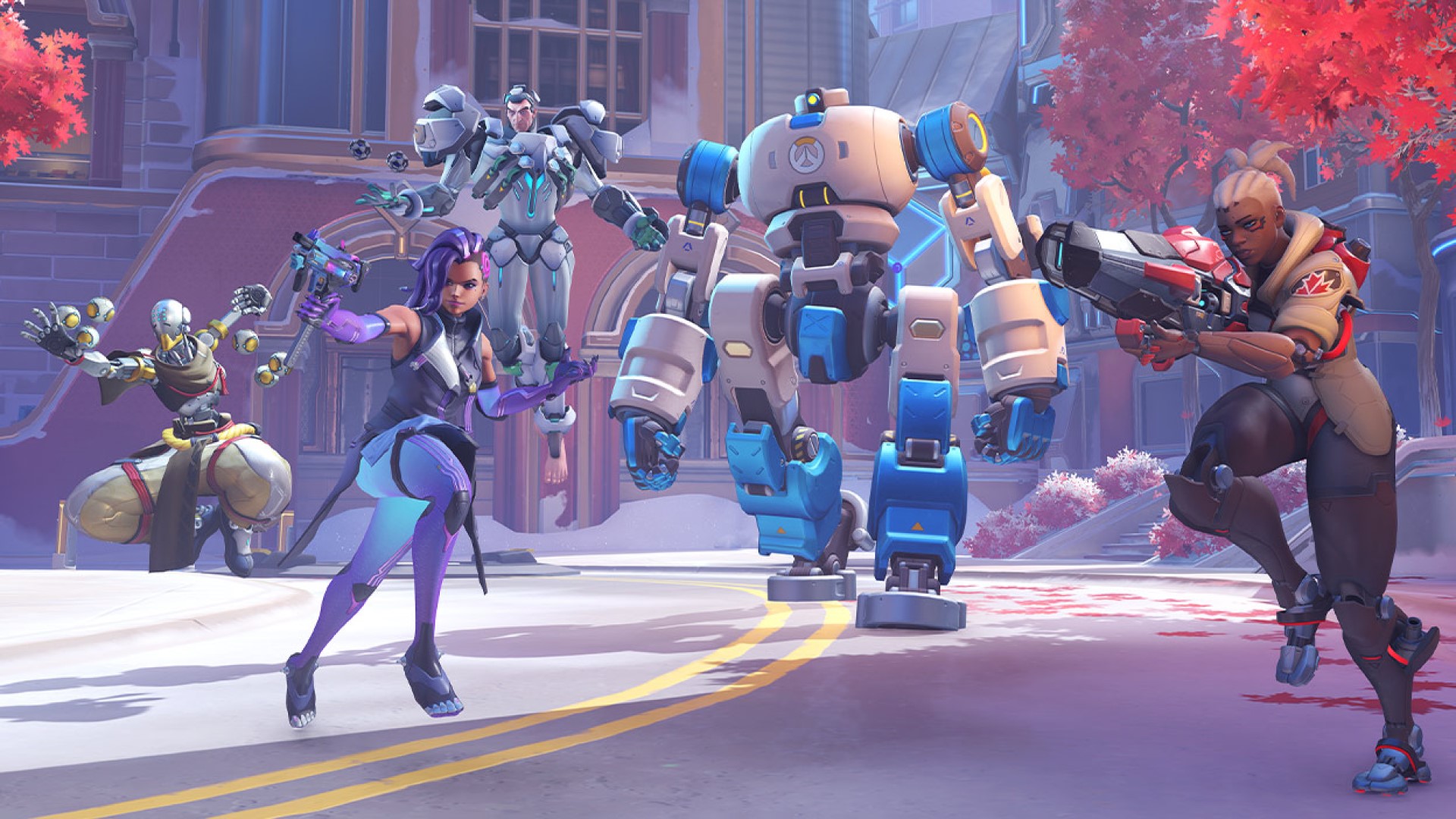 While it took Blizzard a few years to implement cross-platform play in the first game, Overwatch 2 will launch with it already available. Cross-progression is also included, allowing you to merge all your different accounts on each platform into a single profile. All cosmetics will be accessible on each along with the Battle Pass, Overwatch Credits, and OWL Tokens. And thankfully, any cosmetics unlocked in Overwatch 1 are still carrying over into Overwatch 2.