Add extra hits to attacks for a short time with Silkbind Shockwave or attack and sidestep with the new three-hit Swing Combo. 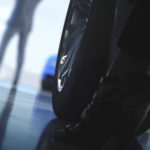 Available on May 28th and June 5th, the network test will assess quality and stability en route to the game's launch this Spring.