The digital adaptation of board game Gloomhaven is coming to consoles. Sadly, the announcement hasn't revealed exactly which consoles.

LOST EPIC is a 2D sidescrolling RPG that is finally seeing a full release out of Early Access. It is coming to PC, PS4, and PS5, and will feature multiplayer on release. 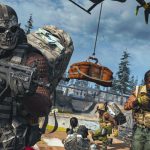 Call of Duty: Warzone 2 Will Introduce an Interrogation Feature – Rumour

New leak claims that the battle royale shooter will also bring back armour vests and an expanded version of Blackout's inventory system.

From console games being better for casuals to cheating only being a PC problem, these misconceptions continue to persist.

Land extra hits on counters with the Long Sword's Harvest Moon or soar into the air and come crashing down with the Lance's Skyward Thrust.

Splatoon 3 Will Support Cloud Saves, but Only for Offline Data

Nintendo Switch Online subscribers will be able to upload their Splatoon 3 data to the cloud- but not from any of its online modes.

This week offers some decent rolls for Hawkmoon and Dead Man's Tale along with the Holdfast armor set and new Legendary Weapons.