Everything you need to know about Pillars of Eternity. 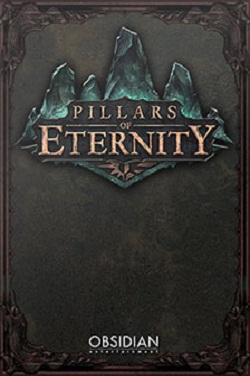 Pillars of Eternity is an upcoming Isometric Fantasy Action Role-Playing Game  that is currently in development by the industry giants, Obsidian Entertainment that is set to be published by Paradox Interactive (Magicka: Wizard Wars and Warlock II: The Exiled). Running on the cross platform Unity Engine, Pillars of Eternity is currently set to launch on Microsoft Windows, OS X and Linux with no mention of a console port yet. The game is slated for a winter release of Q4 2014 and available for purchase via pledge, it is currently set to be a digital download only title.

In the beginning Pillars of Eternity was simply an amorphous game being teased by Obsidian on their official website under the title, Project X that was represented by a number 4 with an Ouroboros (from ancient Greek, Uroboros is the snake that constantly consumes itself in a never ending cycle that the Greek philosopher Plato described as being the first ever living thing and a mythologically constructed being) circling it. The next day, the site was updated and it was revealed that the mysterious Project X had been replaced with a countdown and the following text, “The book unread is unwritten. The reason we don’t explain it is the reason we use it. Its power is in its mystery. That is the Leaden Key, in part, in whole. Is it clear? Digging for truth buries the seeker.”

On September 14th of 2012 the countdown ended and a KickStarter campaign went live alongside additional information surrounding the game, saying that the entirely original game would feature “compelling storylines, deep companions, tons of exploration, moral complexity, and fun tactical combat”. The Creative Director for Pillars of Eternity, Chris Avellone said “We’ve been able to touch on various mature themes in some of our previous titles, but not really with the same amount of depth that this project will allow for. Dialogue writing and characterization are really important to us at Obsidian, as a studio. It’s shown in all the titles that we’ve released. In just over 24 hours the KickStarter campaign reached and exceeded its 1.1 million dollar goal, which allowed a set of stretch goals to be announced which includes features such as new playable races, a mac build of the game and an entirely new region in the game.

Given the games obvious inspiration from titles like Baldurs Gate and Icewind Dale that run on Biowares Proprietary Infinity Engine, it is no wonder that the game takes an isometric view of things and was the perfect candidate for the KickStarter program. Speaking about it in an interview, Obsidians CEO Feargus Urquhart explains why he went down the path of crowd funding rather than seeking funding through traditional means, “The reason is not a whole lot different than what we talked about a couple of years ago. It’s not as if people stopped wanting games like Icewind Dale or Baldur’s Gate, it was more that BioWare moved on as a studio and Black Isle [Black Isle Studios, a subsidiary of Interplay Entertainment] went away. I hear from people all the time that they run out of the newer games to play and go back and play Baldur’s Gate 2 or Torment for the fifth or sixth time. What Kickstarter does is let us make a game that is absolutely reminiscent of those great games, since trying to get that funded through a traditional publisher would be next to impossible.”

On October of 2012, the KickStarter Campaign for Pillars of Eternity was brought to a close having amassed a total of $3,986, 929 (not including pay pal pledges) making it the number one most highly funded project to have passed through the KickStarter platform. That title was however taken from them by Torment: Tides of numenera. Another Role Playing Game but from inXile Entertainment (Hunted: The Demons Forge and Wasteland 2) which reached $4,188,927 on April 6th of 2013.
Chris Avellone also made note to mention that a console port of the game would not be coming, due to console limitations, saying “Those [console] limitations affect RPG mechanics and content more than players may realize (especially for players who’ve never played a PC RPG and realize what’s been lost over the years), and often doesn’t add to the RPG experience.” 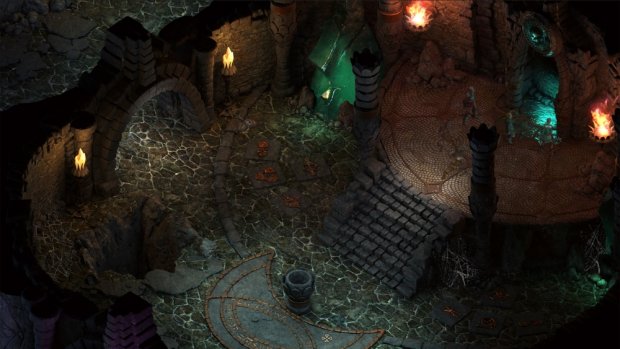 The Role Playing Game genre is no stranger to the isometric field of view, a notable example being Fallout, but Pillars of Eternity draws it’s inspiration from Fantasy games rather than Sci-fi titles. Making use of party based combat with an Active Pause system (sometimes called “real time with pause”) the game is set in a 2D world comprised of pre rendered backgrounds similar to that found in the spiritual ancestors of the game such as Baldurs Gate and Icewind Dale which all ran on Biowares proprietary Infinity Engine.

Players will be able to build a team of 5 companions who can be found and recruited as you traverse the land and explore the game world. Staying true to its RPG roots, the players character will have a high degree of customisation options ranging from class and race, to traits and skills. Even a personal back story. 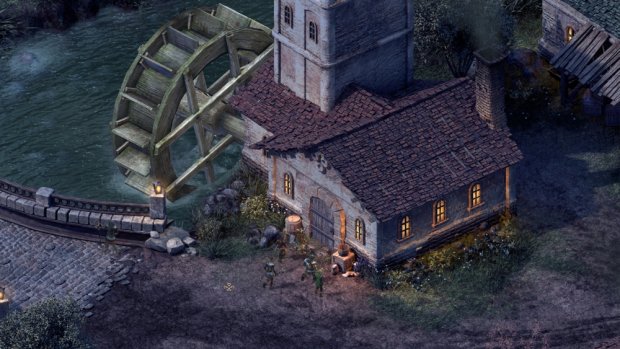 Pillars of Eternity is set in a land that is currently without a name but is loosely styled on mid 16th century era medieval technology. In this land, ones strength and magical power is determined by the strength of their individual soul. The various races and inhabitants of this yet to be named land are fighting over the knowledge of souls found inside an ancient and magical ruin, this inherently causes large scale conflict. The player character is a newcomer to the region having been caught in some bizarre supernatural anomaly. Being caught in this difficult position they must explore the world and solve the problems that have beset them. 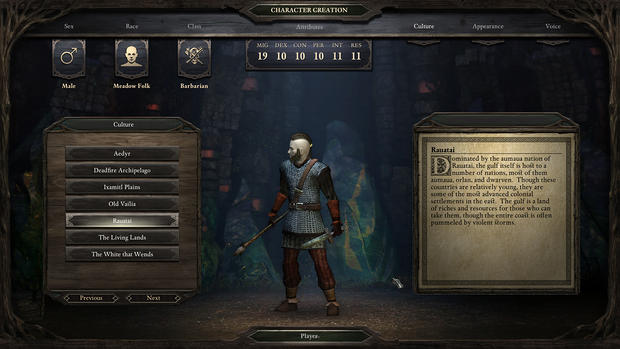 Rogue – Rogues start the game with bonuses to both their stealth and mechanics skills whilst also being the only class to get a bonus to both skills.

Ranger – Rangers have high single target damage attacks that can all be used at long range. They also make use of animal companions.

Priests – Priests make use of buffs, personal buffs, AOE attacks, directed single attacks and healing spells. If paired with other priests they can make use of combo spells.

Paladin – Paladins are warriors that are greatly dedicated to their cause which despite common tropes, need not be religiously inclined. They bring a variety of personal and area buffs and passive ally buffs to the field.

Fighter – Fighters make use of brute force and traditional weapons to level the playing field with their feints and knock down attacks, whereas others tank damage and slowly wear their opponent down.

Druid – Druids are the most gifted crowd control specialists as well as being able to change their form into powerful animals that can make use of powerful directed single strike attacks.

Cipher – Ciphers make use of their magical powers via the manipulation of other souls, to this end they are only effective in combat by targeting allied units with their abilities.

Chanter – Chanters are the primary summoning unit amongst the playable races, they make use of a wide array of buffs and passive buffs as well as the powerful spells known as invocations.

Barbarians – Barbarians are distinguishable from fighters by their reckless abandon that sees them sprint straight into the combat with their wild sprint ability. Coupled with Carnage they can deal damage to those who surround their primary target.

Wizards – The Wizard is a highly versatile combatant that uses single target spells, AOE spells, personal and target buffs as well as a number of magical spells that cause toxic, fire and electric damage.