In the end, this game is addicting as hell.

PlanetSide 2 is a long awaited sequel to a very popular MMOFPS that was released back in December 2002 on PC. Objective of the game is to fight for control of the continents in massive battles, PlanetSide 2 continues this trend and makes a great impression.

Colors are not the only difference between the factions, each faction has their own specific weapons. My personal favorite are the Vanu Sovereignty, they look the most advanced and alien-like as opposed to the other factions. Once you have created your character the battle begins.

PlanetSide 2 launched with a total of three different continents, and more will be coming out in future updates. Esamir is the tundra continent with a lot of mountains and snow, Indar features a lot of canyons and desert areas, while Amerish is full of vegetation and beautiful green landscapes.

Once you go past the loading screen, you’ll be able to choose from 6 different classes. You have the Inflitrator who is basically the only stealth sniper in the game with cloaking abilities.  Light Assault who is the most mobile out of all the classes and is able to maneuver around the battlefield using jump-jet technology. Combat Medic  that has healing grenades and access to different weapons.

Engineer that is able to fix repair vehicles on the battlefield, generators, and specialized explosives. Heavy Assault who is the only class that has access to heavy machine guns, Exo-suit armor, and a shield system. Last, but not least is the MAX class (Mechanized Assault Exo-Suit) who wears the heaviest armor and weaponry in the game, but sacrifices a lot of mobility and speed on the battlefield.

PlanetSide’s 2 class system is very well designed because each class feels unique and different. Every class has their own certification tree, different abilities they can use and specific weapons. As you play the game online whether your winning or losing you will be earning at least one certification point per hour. You can also earn more points by getting at least 250 XP for different actions in the game.

Once you have acquired enough points you can then spend on infantry weapons or vehicle weapons. It can be a time consuming process to unlock everything in the game, but considering how addicting it is you won’t even care. 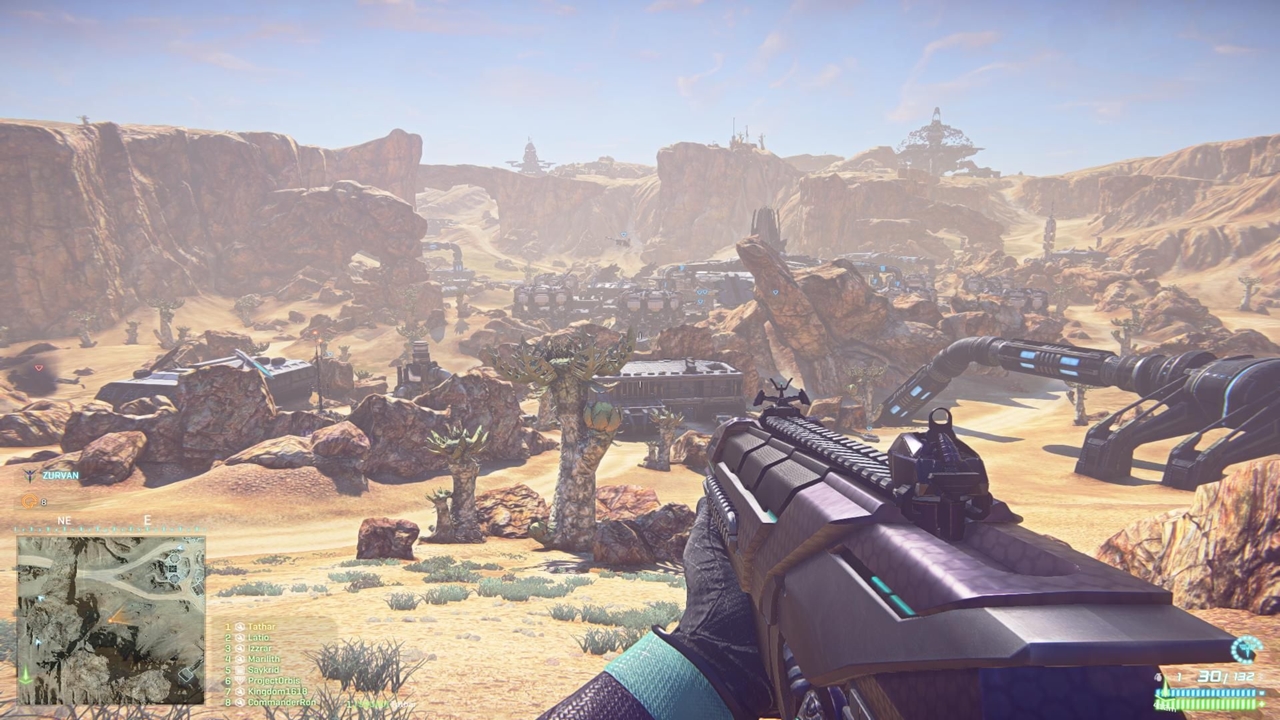 This is where PlanetSide 2 truly shines, combining amazing atmosphere and scale with fantastic FPS gameplay elements. You have battles going on in the air with flying vehicles, infantry on the ground, tanks trying to own everything they see in their site, snipers up on the cliffs, or on buildings. What makes PlanetSide 2 really unique is that because of the continent’s  enormous scale there are many different battles going on at once across the entire land. This creates war-like atmosphere and total random outcomes, which is awesome.

You can stay in one area and try to defend it for hours, or depending on your success you can push an enemy away with enough force and strategy and take over the territory. The continent is devided into hexagons, each hexagon some sort of facility that the factions fight for. When the battle is going on the hexagon flashes on the map, the colors identify which faction is currently holding it. 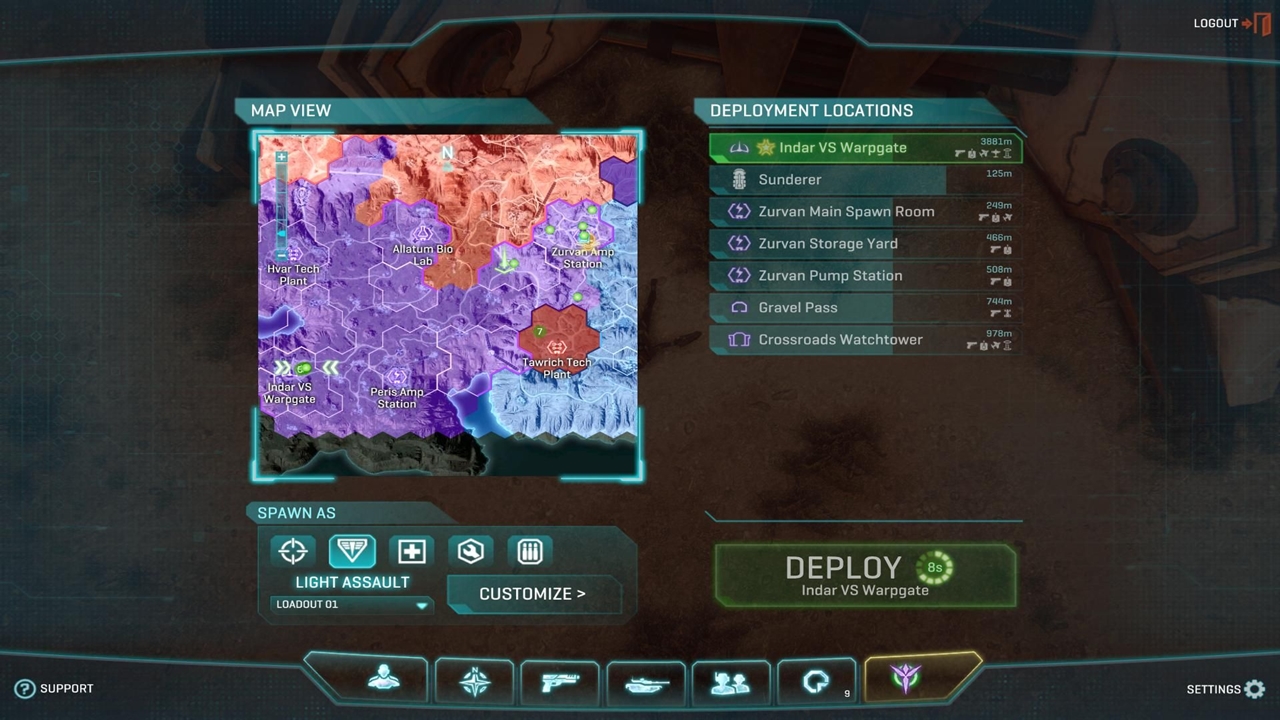 Battles can get really intense, especially during the defending phases in a heated battle. You’ll have explosions going off, ground vehicles firing at each other along with aircraft vehicles trying to bomb the infantry as much as possible. Sound effects are fantastic, you’ll hear lasers whizzing by your ear, plasma being fired off in distance and everything else you can imagine when your in the center of the battle. PlanetSide 2 may look great, but it requires a pretty hefty rig, due to the scale of the game and the amount of action going at once it will try to leave a mark on your processor and graphics card. Some people may be put off by this, but this is PC gaming and there is not much you can do about that. 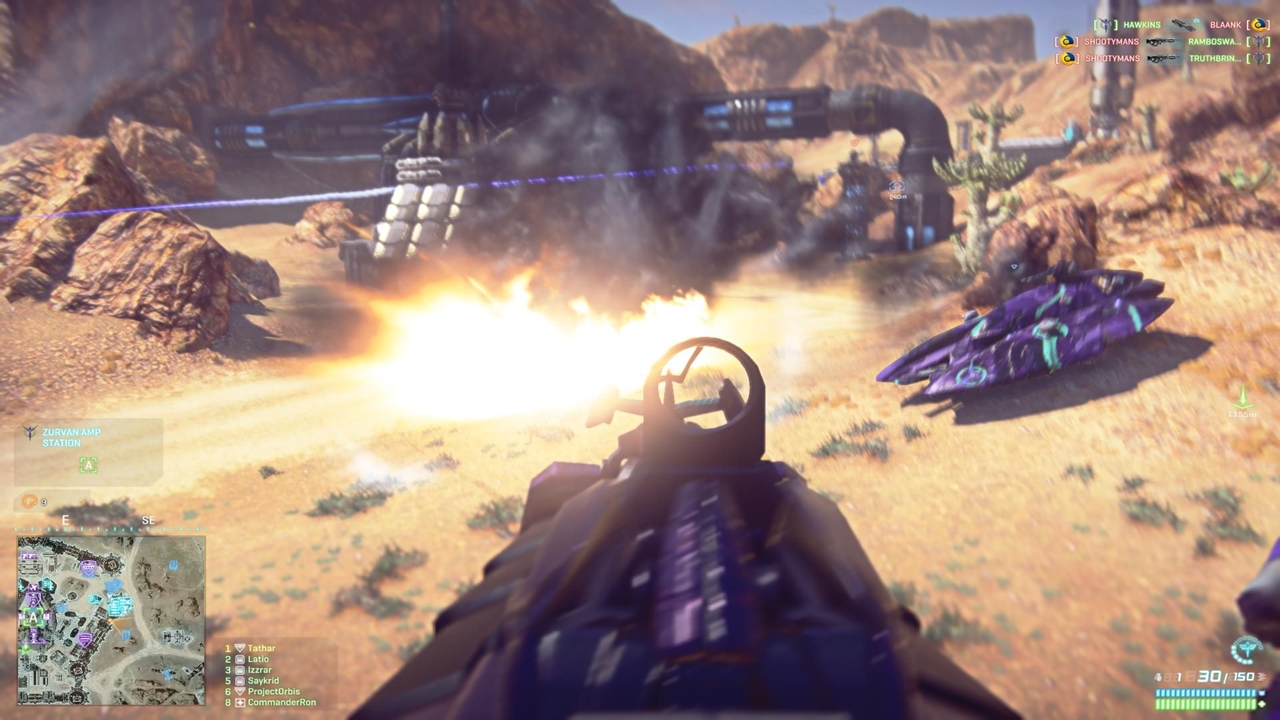 Just like Battlefield 3, PlanetSide 2 has a squad system that you may join whenever you want, you can also be invited too one. The game supports a voice-chat system and dedicates voice-chat to each squad seperately, so that you can only hear your squad’s leader talking and follow his or her commands. It’s a very smart system, the sound quality is clear and it makes the game more immersive experience in a sense that you’re actually in a war and trying to strategically outsmart your enemy by communicating with your teammates just like you would in real life.

If you don’t feel like running for miles just to fight someone, you can simply find a heated battle by looking at your map and deploying yourself near it and be seconds away from engagement. PlanetSide 2 spawning system is awesome, it lets you quickly engage and hop around different battle spots within seconds. Sometimes you may spawn in a weird place next to the battle, but that happens very rarely.

My only biggest gripe with this game is that it took me a few days to actually start liking it. The only reason it took me a few days was because the game was very overwhelming at first, when I was deployed on the battlefield for the first time I had no clue where to go, how to find a fight,  how the deployment system worked, how to acquire vehicles and so on. I would constantly get killed out of nowhere and just get frustrated which made me not want to play the game. 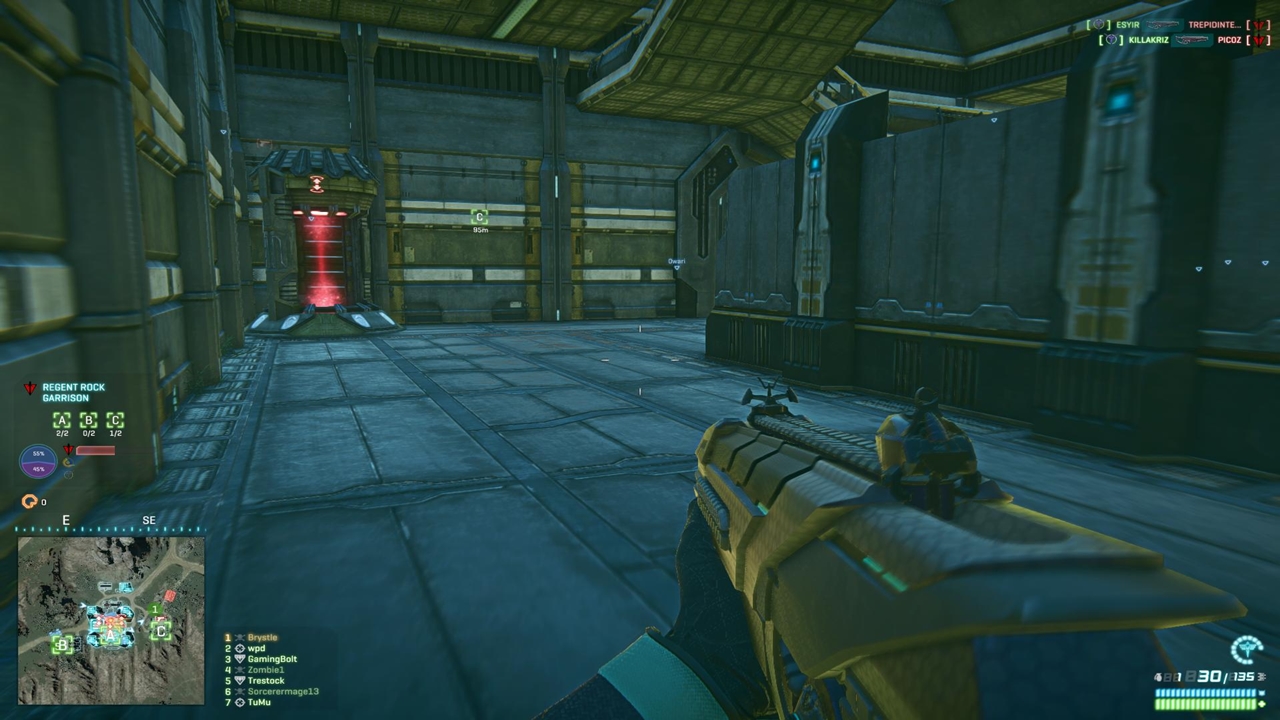 The in-game text tutorial does a very poor job of explaining how the game works, however if you go to the official PlanetSide 2 website you can find plenty of high-def video tutorials on every aspect of the game. I would highly recommend doing this since the game doesn’t give any offline tutorial, or a in-game video for that matter. If you don’t care and want to just jump in and learn as you play you can do that too, but some people may really be put off by the frustration and not even give the game a chance it deserves.

Overall I am very impressed with PlanetSide 2 and I am glad I gave it a shot. I highly recommend giving this game a shot, it’s one of the most unique experiences you’ll find anywhere, gameplay is top-notch, graphics is great and the best part is you don’t have to pay for it either. You can acquire certification points with real life money, or just by simply playing the game, the good part having all the upgrades for your weapons doesn’t really give you that much of an advantage considering there are over 400+ people on a single continent 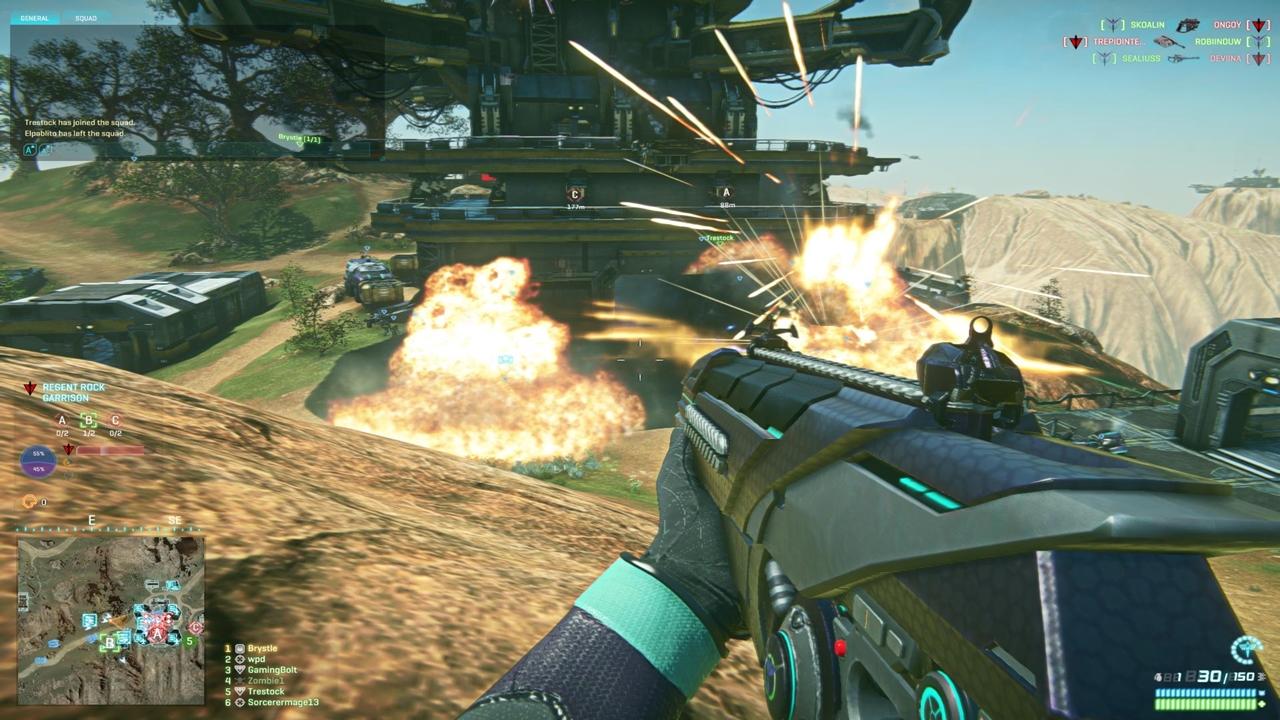 Whether your the guy that poured a ton of money into this game, or just a poor college student that wants to have fun it won’t matter, because there is no real advantage considering how random PlanetSide 2 is.

You’ll be enjoying this game so much that you’ll end up earning a ton of certification points anyway and unlock the stuff you want at your heart’s content. In the end, this game is addicting as hell, wait… Why are you still reading this review? Go download PlanetSide 2!

Requires a good computer to run decent, some textures look blurry when up close, no in-game tutorials and has a huge learning curve, hard to tell sometimes who is your ally and who is your enemy on the battlefield

Final Verdict:
EDITOR’S CHOICE
PlanetSide 2 is a sci-fi free-to-play MMOFPS hybrid that does majority of the things right, but also lacks in-depth tutorials and forces the player to learn the hard way.
A copy of this game was provided by Developer/Publisher/Distributor/PR Agency for review purposes. Click here to know more about our Reviews Policy.