Somebody get me a salad.

The first mini-quest Plants vs. Zombies sends me on is to use the game’s slot machine. Equipped with exactly the right amount of coins from Major Sweetie – the most cheerful sunflower ever, who also really likes it when things explode – I walked over to the machine, naturally situated conveniently near the place you spawn in Team Plant’s home base, and dump my coins in. It’s very expensive to use the slot machine. A single plays costs about 30,000 coins. As my money disappears, and the enormous Mr. Reward-O-Tron 9000 spins down a cosmetic for me, I stand in awe of how blatant this game’s monetization will be.

You can’t just buy the cosmetics you want with in-game currency, no, no, no. That would be too easy, and so is reserved for the game’s microtransactions. Microtransactions aren’t in the game yet, but they will be soon, allowing players to visit Rux’s Emporium and purchase the pieces they want, no slot machine required. It seems EA has figured out how to get people to open their wallets: deny them the ability to get what they want unless they pony up for it. This is character customization in the modern video game: if you want something, you’ll have to pay extra for it, or hope you get lucky. The fact that this system was employed in a game marketed primarily to children is particularly troubling. 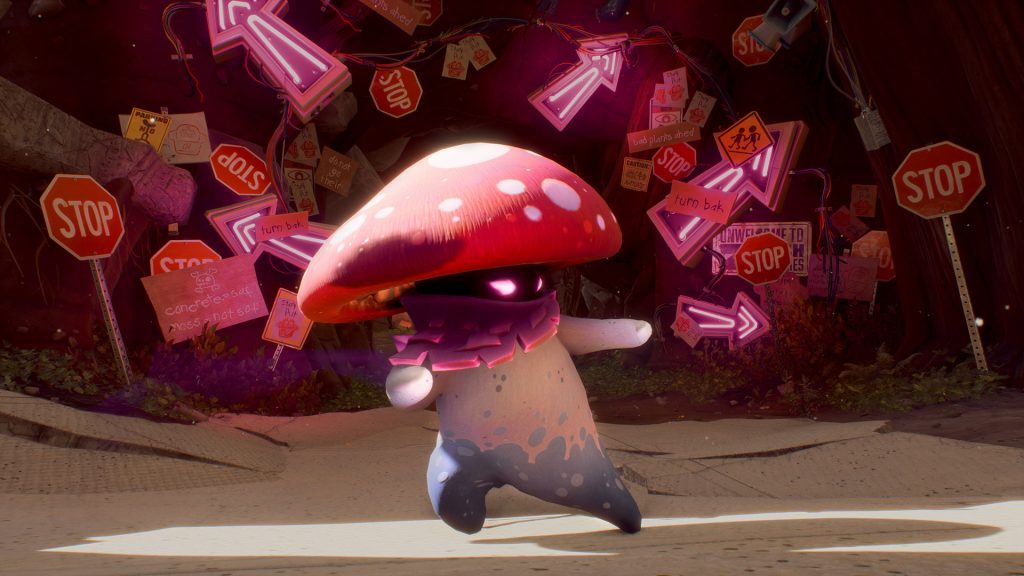 "Battle for Neighborville introduces PVE content into what has been a series built on PVP."

I could go on and on about the evils of microtransactions, but unfortunately that is simply the reality of the industry. As long as putting systems like these into games continues to make publishers hundreds of millions of dollars (see: FIFA Ultimate Team), they will continue to do it. It’s possible to play and enjoy Plants vs. Zombies: Battle for Neighborville despite this, but the game’s goal is obvious from the jump: to part you from your money for a cool hat. Or several.

This is a shame, because the core of Battle for Neighborville is a solid game. It’s essentially Garden Warfare 3, though why EA decided to drop that subtitle for one that is far, far worse is a mystery that will remain locked in their marketing department. The major difference here is that Battle for Neighborville introduces PVE content into what has been a series built on PVP. Both Team Plants and Team Zombies have their own separate hub areas where you can customize your character, acquire upgrades, hang out with other players, and even play a couple mini-games. There’s even an amusement park sandwiched between them, so you can hang out with members of the other team and practice your combat skills in a stress-free environment. The team hubs also your gateway to the game’s other modes. They’re pretty dense areas that can be confusing to navigate at first, but once you get used to them, the way they’re set up makes sense. They’re also quite charming. You also don’t have to use them for them. Things like switching teams and character customization can be accessed by pressing start.

After your finish the eight introductory quests, which will teach you how to navigate the hubs, use emotes, play mini-games, character characters, and gamble your money away in the aforementioned slot machine for items you may or may not want, you can jump into the game’s other modes. There are three PVE modes in all: Mount Steep (plants), Weirding Woods (zombies), and Town Center (both). Each has quests to do, areas to explore, and bosses to fight. There are even small storylines to complete. These areas can be done with any available character, and can be played solo or with friends. 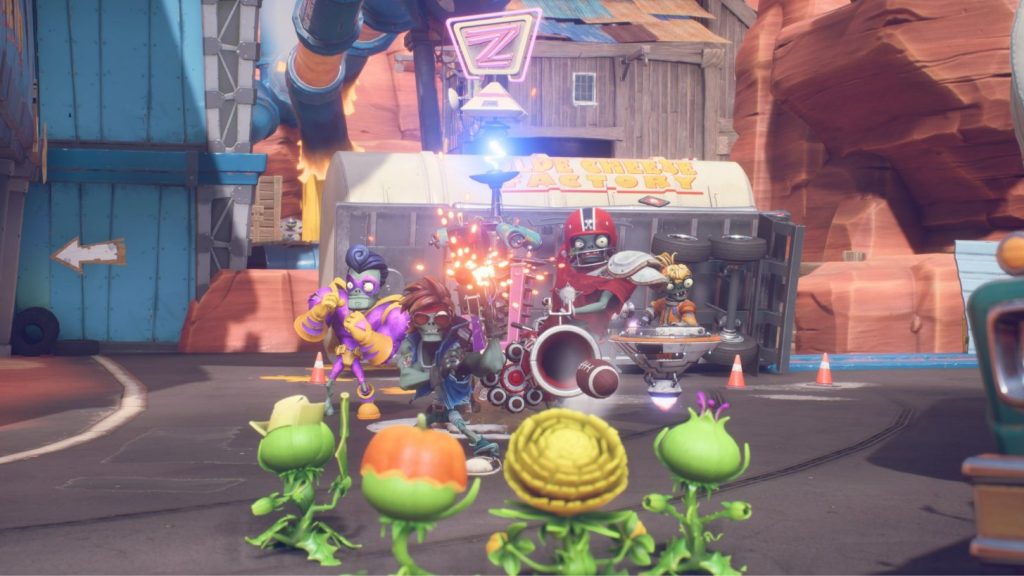 "The big issue is the quests themselves, which are so bog standard it’s hard to have any investment in them. When one of your opening quests is an escort mission (and the thing you escort is a lawnmower), you know you’re not dealing with inspired quest design."

While it’s nice that this game includes all this stuff, I didn’t find any of it particularly impressive. The zones themselves are cool and pretty big, and the writing is meant to be silly (though your mileage will vary. I was mostly annoyed). Even the boss fights are pretty good. The big issue is the quests themselves, which are so bog standard it’s hard to have any investment in them. When one of your opening quests is an escort mission (and the thing you escort is a lawnmower), you know you’re not dealing with inspired quest design. This is made worse by the fact that your standard NPC enemies just aren’t very fun to fight. The upgraded enemies can be, but when much of your opposition is canon fodder, it just isn’t very interesting. I’m not saying that there’s nothing of value here, but I have a hard time believing most players will be into Battle for Neighborville for its PVE long term.

PVP fares better. It’s still a class-based shooter in the vein of Team Fortress 2 or Overwatch, though the variants system from the previous game has been abandoned. There are 20 characters total, divided into attack, defense, and support, and each side has three new additions. The zombies have the Electric Slide, a roller skating, lighting gun wielding maniac, the bow wielding, heavy damage 80s Action Hero, and the Space Cadet, who can transform their small vehicle into a larger one and combine into a larger unit with other Space Cadets. The plants, meanwhile, gain the ninja-esque Night Cap, the fire-breathing, up close and personal Snapdragon, and the Acorn, who can transform into the mighty Oak, and have three Acorns ride along with him. All characters have also gained the ability to sprint, making them more elusive.

Characters can also spend a set amount of points to equip upgrades, all of which do different things, and have different point costs depending on what they do. It’s a neat little tweak that allows you to tailor your picks to your playstyle. More are available as you level up, but you’ve got a good smattering from the jump. Character balance is elusive at this point, as is hit detection, which doesn’t feel 100% right. The addition of sprint is nice, but running speed also feels a bit off, too. I could never quite tell how fast I was going to get somewhere, and the animations often oversold a speed the characters didn’t possess. I imagine a lot of this will be worked out as time goes on, but the game doesn’t feel as good as it probably should yet. 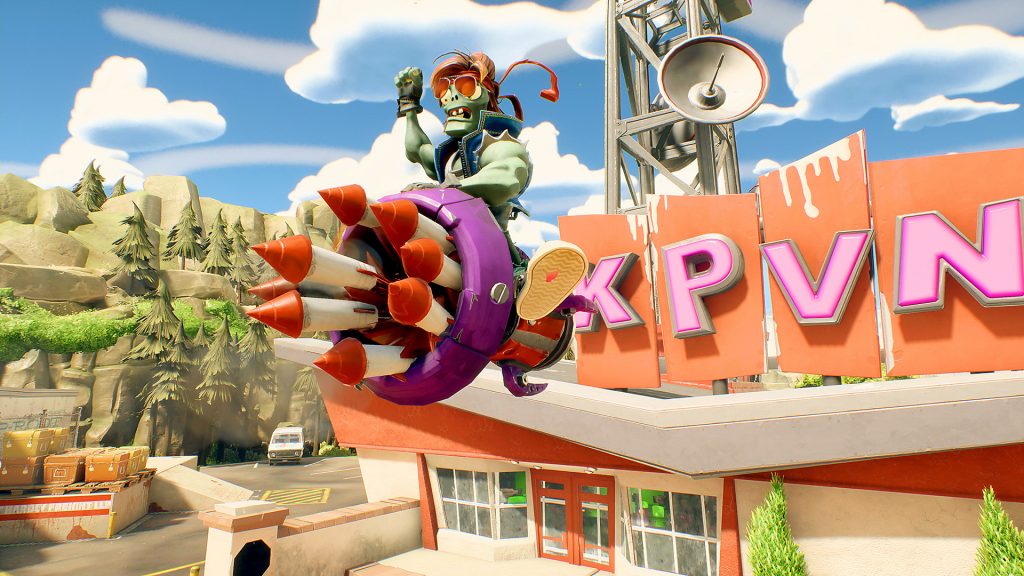 "One cool variation is Battle Arena, which is a series of 4v4 rounds. You can’t respawn once killed, and once you’ve picked a character, you can’t use them again for the duration of the match. It makes from some cool, tense moments similar to execution in Gears of War, and it forces you to use multiple characters."

The modes fare better, even if many of them are similar to modes in other games. There’s a tower defense mode, a couple of objective modes, and basic deathmatch. One cool variation is Battle Arena, which is a series of 4v4 rounds. You can’t respawn once killed, and once you’ve picked a character, you can’t use them again for the duration of the match. It makes from some cool, tense moments similar to execution in Gears of War, and it forces you to use multiple characters. Turf Takeover is another winner; it’s a 12v12 mode on huge maps that feature multiple modes. You’ll have to push payloads, capture points, and complete often absurd final objectives, like delivering bombs to the enemy base while dodging falling marshmallows. It reminds me of Overwatch or Star Wars: Battlefront, and I had a lot of fun playing it.

And of course, the game has charm. Whether it’s the individual animations, absurd character designs, or the environments, Battle for Neighborville delivers a unique and fun visual style. The real issue is that, as fun and silly as any of this is, none of it is memorable, or particularly stands out. If you’ve played a Plants vs. Zombies game up until this point, or a team-based, objective shooter like Overwatch, all of this is going to feel very, very familiar. None of it is bad, per se, but none of it is particularly good, either. It just kind of is. Battle for Neighborville is kind of like junk food. It’s fun enough while you’re playing it, and the instant you stop, it vanishes from your mind. Still, it’s just good enough to keep eating. I don’t think Battle for Neighborville is good enough to win over a lot of new fans. The PVE additions aren’t good enough to attract new fans, and the PVP, a few new characters aside, is more or less the same. If EA wants to get people to spend money on their microtransactions, they should probably provide something a little more filling.

The microtransactions are coming. You have to use a slot machine to get cosmetics. Movement and hit detection feel off. PVE design is rote and uninspired. Nothing really stands out.

Final Verdict:
FAIR
Plants vs. Zombies: Battle for Neighborville is a competent team-based shooter, but looking microtransactions and the lack of anything truly new prevent it from being anything more than junk food.
A copy of this game was purchased by author for review purposes. Click here to know more about our Reviews Policy.