Plants and zombies are at war again.

PopCap Games are back at the helm of this sequel to 2014’s Plants Vs. Zombies: Garden Warfare. With PopCap’s amazing humor and witty takes on a world controlled by both zombies and plants, there are infinite possibilities on where the zany jokes can go next.

It all begins… well, at the beginning. You’re dropped into the Backyard Battleground just after about a minute’s worth of training. The Backyard Battleground is where almost everything takes place: story mode, character selection, treasure hunting, vending machines, etc. It is one massive map with three defined areas: The zombie base, plant base, and a middle ground where it’s all out warfare.

As the game drops you in, it explains practically nothing with an overwhelming amount of places to see, things to do, with a lot of stuff glowing and flashing and moving around you. Plants and zombies are at war with one another and then you’re off to do whatever you see fit. That may sound good for some gamers, but not so good for others. Essentially, it levels the story mode down to practically nothing. The reasoning behind all of these attractive outposts that are begging to be explored all at once was PopCap’s idea of eliminating a menu list.

"With PopCap’s amazing humor and witty takes on a world controlled by both zombies and plants, there are infinite possibilities on where the zany jokes can go next."

Another downside is the fact that there is no pausing in this game. You can be in the middle of battle, press pause and an options menu of screen adjustment and sound pop up, but dose not freeze the game within the background. This is because the game is connected to the EA servers and thusly always in an online mode. This problem could also be found on the newest Need for Speed game which is also an EA franchise.

With almost no real story to speak of, and a lot of places to explore, you’ll quickly find the waypoint to the “first” objective — that is if you decide you want to do that first. Soon thereafter, talking with the characters that ask you for favor after favor, it becomes apparent that this is simply a fetch quest single player game, with a few unique twists and turns thrown in for good measure. Some of these quests, such as finding a remote control, are standard fare for many generic-type games. Protecting characters as they make their way through the Battleground, or shooting targets in a certain amount of time are also standard but not overly used.

Controls for each character are laid out similarly, right trigger is shoot, and LB, RB, and Y are special abilities. As I mentioned before about how the game doesn’t explain much, I almost died in training because it didn’t inform me that I could even shoot. I kept hitting the special abilities but when hordes of zombies were after me, those abilities didn’t work for very long. However, precise shooting, fun powers and awesome abilities really help this game hold its ground.

Speaking of characters, Garden Warfare 2 has a lot of different characters to choose from, with unlockable abilities, customizations and features for each one. It’s insane to see how far they’ve come from the last entry and this really had me thinking. This game, with all these characters such as a Rose, Corn, Sunflower, Zombie, Zombie stuck in Outhouse, Behemoth Zombie, legendary characters, etc. made it feel as though EA is plotting something for the future of the series. This may be way out of left field, but Garden Warfare 2 gives the vibe that EA are going for their own version of Skylanders. I can see it now, all these massive amounts of characters becoming figures and future DLC within the next entry. All these characters are unlockable and available within the game. What’s cool is that characters from the original Garden Warfare are transferable to Garden Warfare 2 including their abilities through the mailbox in the Backyard. 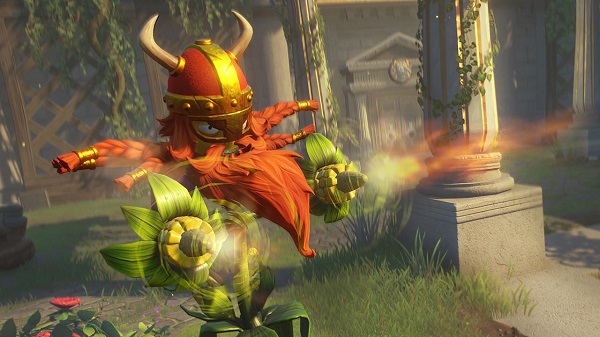 "It’s nice to see split screen play utilized and running well in games these days, still. Along with a Solo Ops that allows those who aren’t quite ready for online to get a feel for the game and get better with what they are in for. "

While exploring this well-sized world, you may eventually come across Vending Machines. These machines use in game money that can be earned through many different ways but mostly through missions and multiplayer. These Vending Machines sell collectable sticker packs. Each pack is randomized and gives a small description and price before purchase. Cards can contain characters, abilities, weapons, and so much more. They’re cool to collect, but the better sticker packs are quite expensive.

After exploring for about an hour as a plant, I came across a machine that let me switch sides. Instantly morphing me and transporting me to the zombie side of the map. Here you will find an nearly identical layout of the plants’ side of the Backyard. A zombie who gives the main missions, a multiplayer hub, Vending Machine, leaderboard, etc. It’s just zombified: meaning a bit darker and creepier, but still friendly and hilarious for any age. Here, the missions are similar to the plants’ side.

It’s nice to see split screen play utilized and running well in games these days, still. Along with a Solo Ops that allows those who aren’t quite ready for online to get a feel for the game and get better with what they are in for.

Finally, the online mode of Garden Warfare 2 is were the real fun begins. There are a variety of different game modes to choose in multiplayer, and there’s definitely something for everyone. These online game mods include Welcome Mat which is a mode where only core characters with no upgrades permitted. It is designed for people new to Garden Warfare online mode. In Team Vanquish mode, battles take place between the team and and the game ends when one team reaches 50 vanquishes whereas Vanquish Confirmed requires players to grab orbs similar to capture the flag in other online games. In the Suburbination mode, the player needs to hold strategic points and in Gnome Bomb, you take on the role of a Gnome bomber and it’s your job to plant a Gnome Bomb on the opposing team’s garden or tombstone. And lastly the Mixed Mode: which is a blend of every game mode together and is meant for the person who wants it all. 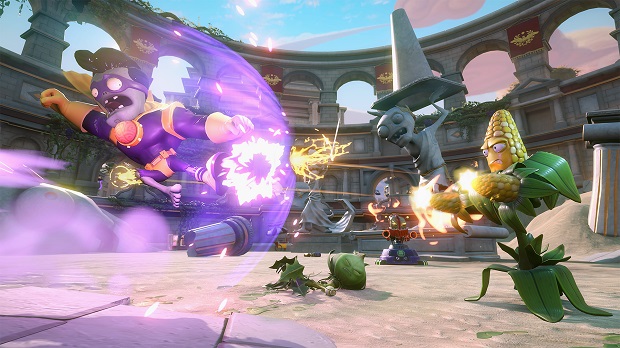 "After it’s all said and done, Plants vs. Zombies: Garden Warfare 2 is a success with it’s vast multiplayer selections to choose from, but with an unnecessarily confusing single player."

Each mode is similar to most other multiplayer game modes, with the twist of using hilarious zombies or plants. The modes ran smoothly with minimal lag and no screen tearing of any sort. The tower defense strategy gameplay on some multiplayer games was a lot of fun and made me forget about the drop-in style single player confusing gameplay.

After it’s all said and done, Plants vs. Zombies: Garden Warfare 2 is a success with it’s vast multiplayer selections to choose from, but with an unnecessarily confusing single player. This is definitely worth trying out for those who are fans of the PvZ universe. Garden Warfare 2 is a hardcore game for casual players, but for hardcore players it’s just too casual.

Multiplayer is a blast. Tons of characters and sticker packs to unlock, collect. Graphics are mesmerizing and the atmosphere is enchantingly splendid.

Drop-in style single player makes it very confusing on what's what and where to begin. There are a lot of things to do, but figuring out where to begin can be overwhelming. No real story.

There is just way too much to do in this game and it can get confusing without some sort of organized menu system. But if you can stick past that, be okay with having to walk to each event rather than click a button on a menu, you should be fine. Multiplayer will keep this game alive with so many options to choose from and it's suitable for all ages.

A copy of this game was provided by developer/publisher for review purposes. Click here to know more about our Reviews Policy.
Tagged With: EA, pc, plants vs zombies: garden warfare 2, PopCap Games, ps4, Xbox One