Plants vs. Zombies: Garden Warfare Wiki – Everything you need to know about the game

Everything you need to know about Plants vs. Zombies: Garden Warfare.

Plants vs. Zombies: Garden Warfare is currently planned for release on Xbox One on February 25th of 2014 in North America, Xbox 360 on February 21st of 2014 in Europe and a global release for Microsoft Windows on the 27th of February of 2014. The game will be running on the powerful Frostbite 3 Engine, developed by EA Digital Illusions CE (EA DICE). Plants vs. Zombies: Garden Warfare will be available at retail and via digital download.

Plants vs. Zombies: Garden Warfare was first shown to the public and media during the E3 2013 (Electronic Entertainment Expo 2013) press conferences. Specifically, this title was unveiled during the EA (the parent company of PopCap Games) conference. Despite first unveiling the game during their conference, EA has previously reported that the planned announcement of this title was due soon and to be expected.  Plants vs. Zombies: Garden Warfare is developed specifically to work with the internally developed game engine, Frostbite 3 which is set to support Mantle (an efficiency focused AMD API [Application Programming Interface) straight out of the box. 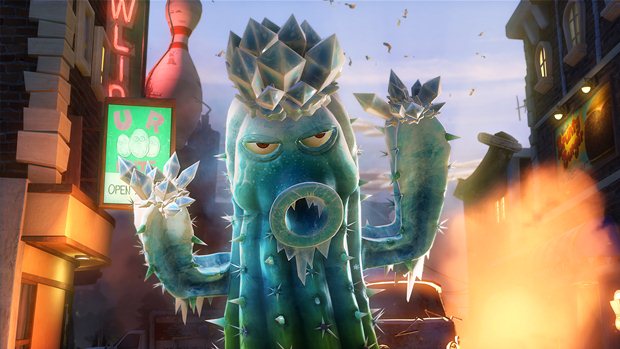 In Plants vs. Zombies: Garden Warfare the player takes control of their own personal army of plants in a third person camera perspective to throw up various lines of defence to aid in the defeat of hordes (waves) of Zombies and sometimes even a final Boss. Playable characters are divided into classes that are differentiated by the unique primary skills that they bring to the game. Featuring four player cooperative play, players can strategically select their plants to best combat a given situation. The multiplayer component of the game will have support for up to twenty four players in online games, which will (between them) have to face waves of with the Zombies whilst playing as the Plants, or playing against the Plants as the Zombies.