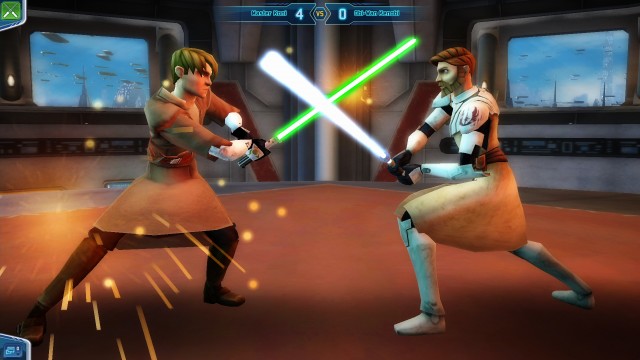 You can play a new game on your PC now called ‘Star Wars: Clone Wars Adventures‘ for free.  It is a family friendly game much like all the Miniclip.com games.  It is pretty much an MMO-RPG but less addicting.  Check out the game right here.  For the full Press Release, keep reading.

“Miniclip is proud to be chosen by SOE to feature its newest hit game Clone Wars Adventures,” said Rob Small, CEO, Miniclip.  “An ideal partnership, Miniclip is the Internet’s single largest online game website that offers a fun and safe environment for kids and families, and Clone Wars Adventures is an exceptional title that offers audiences around the world dynamic and engaging gameplay.”

Clone Wars Adventures is an action-packed browser-based virtual world where fans can live out the thrills and excitement of Star Wars: The Clone Wars animated TV series on Cartoon Network™. Players will be able to battle alongside their favorite Star Wars characters like Anakin Skywalker, Obi-Wan Kenobi, Yoda, and Ahsoka Tano.  Developed and published by SOE and licensed by LucasArts, in conjunction with Lucasfilm Ltd., Clone Wars Adventures is the ultimate virtual destination for fans of the series.  Players can go online to experience fun minigames, daily activities, events, rewards, lively social environments and competitions. Clone Wars Adventures is a dynamic world and will be updated with new content following new episodes of the animated series.

About Sony Online Entertainment
Sony Online Entertainment LLC (SOE) is a recognized worldwide leader in massively multiplayer online games, with hundreds of thousands of subscribers around the globe. SOE creates, develops and provides compelling entertainment for the personal computer, online game console and wireless devices. Known for its blockbuster franchises and hit titles including EverQuest®, EverQuest® II, Champions of Norrath®, Untold Legends™, PlanetSide®, and Star Wars Galaxies, as well as the recent kids’ phenomenon Free Realms™, SOE continues to redefine the business of online gaming and the creation of active player communities while introducing new genres on all entertainment platforms. Headquartered in San Diego, CA, with additional development studios in Austin, TX, Seattle, WA, Denver, CO, and Tucson, AZ, SOE has an array of cutting-edge games in development across various platforms and genres for audiences of all ages.

About Miniclip
Miniclip.com is the Internet’s largest website dedicated to online games according to Comscore Media Metrix, the leading web measurement service. The company develops, publishes and distributes more than 600 casual and mobile games and has more than 57 million game players per month. Founded in 2001, Miniclip is privately owned and privately funded with its headquarters in Switzerland and offices in six countries. Miniclip.com is the only website to ever win the prestigious Webby Peoples Voice Award, the “Oscars of the Internet” for the Internet’s Best Game Site for three consecutive years. For more information visit www.miniclip.com.