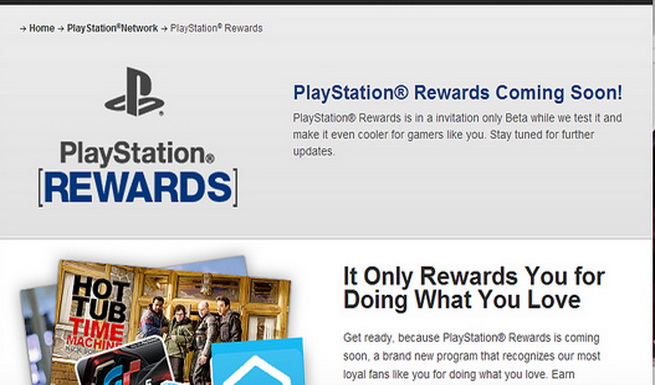 Right now it’s in its beta phase and invites are being sent out to a select number of people. The service will be open to all by Spring next year according to Sony.

The PS Rewards program will be a free but three tier based reward system – Select, Pro and Legendary. Your level will be determined by how many activities you carry out in the world of Playstation including but not limited to playing games, downloading stuff, using PS Home and taking part in surveys and purchasing games from the PS Store.

As usual, the higher your rank, the more rewards you can expect to bag.

“PlayStation’s most important asset is its loyal fans and PlayStation Rewards gives us an opportunity to show our appreciation for their amazing passion and desire to continually evolve the gaming world,” said Susan Panico, senior director, PlayStation Network. “We can’t thank our fans enough for the feedback they have given us over the years and look forward to even more dialog to help us evolve PlayStation Rewards to make it the best possible loyalty program it can be.”

This program is open only for the PS3 right now but plans are there to implement it for the PSP aswell. Beta invites are being sent out to PS Plus and GAP members with the first reward being a all expense paid trip to 2011 Consumer Electronics Show in Las Vegas.

Good initiative by Sony, it’s always nice when someone decides to give something back to the community.