Polaris And Pascal: Our Thoughts On The 14/16nm Paradigm

We take a look at what’s next for the graphics market.

Polaris, Pascal. The Oculus Rift. Giant, 40-inch 4K monitors. These last few months have been nothing short of incredible in the PC gaming space. With Moore’s law having ground to a halt, advances in core tech came to be spaced further and further apart. Nowhere was this more evident than in the graphics card market.

A little history here: Both AMD and Nvidia had 28nm products out on the market by Q1 2012—the Radeon HD 7970 and the GTX 680 respectively. Prior to this, the nature of the semiconductor industry meant that a die shrink would be hit roughly every eighteen months, meaning at most 2 generations of graphics cards per process node.

28nm is a mindbogglingly tiny length—to put things in scale, a human hair can be up to 100 micrometers, or 100,000 nanometers in width. The smaller a transistor gets, the more difficult it is to control its gate. At 14/16nm, FinFET transistors are needed for sufficiently fine gate control. At 7nm and beyond, quantum tunneling rears its head, electrons skip any which way they want to, and conventional transistor models simply don’t work. The technology does exist (at least in theory) to make the leap to increasingly smaller process nodes, but unsurprisingly, it’s not cheap. 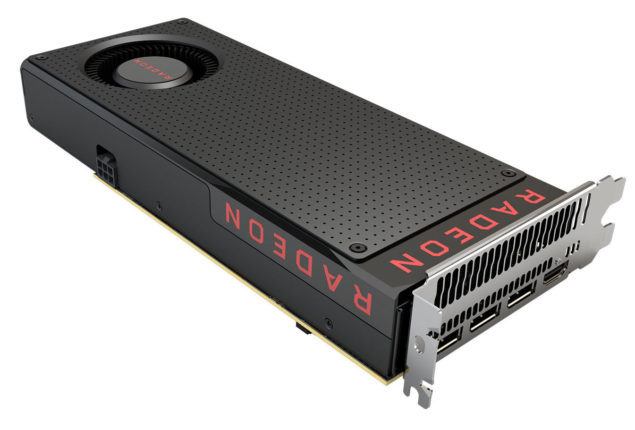 With economics thrown in the mix, the cost-benefit equation just doesn’t make sense the way it used to: Whether you’re talking IoT-enabled wearables, smartphone SoCs, gaming consoles, or million-dollar HPC research platforms, 28nm is the sweet spot, delivering an adequate level of computing power whether you’re scaling down or up. It’s just about good enough to adequately meet consumer needs across verticals, and of course the longer manufacturers cling to it, the cheaper it gets. And when it came to the graphics market, clinging is precisely what they did.

Nvidia’s GTX 700 series was a mix of outright rebadges (like the GTX 770), and scaled-down and scaled-up variations of existing designs. AMD is even guiltier in this respect: The Pitcairn GPU that showed up in 2012’s HD 7870 was rebadged not once, but twice as the R9 270X and the R7 370. Credit’s due where it’s due: Nvidia made great strides in power efficiency with Maxwell and AMD brought forwards-looking HBM memory to the table early. But bottom-line graphics performance for anything but the top-of-the-line flagships has failed to increase substantially since 2012, discounting rebranding hijinks.

This was the scenario until about a month ago: Inertia in every segment apart from low-volume, high-impact behemoths. Old flagships moved further and further downmarket. Yes, they wrung 28nm for all it was worth, but at last: Polaris and Pascal. Two new architectures on new process nodes. Genuinely new GPUs at every price tier. Phenomenal gains in performance-per-watt and performance-per-dollar. New product categories. There was a lot of feet-dragging—and considering the 300 million dollars-plus R&D hit AMD incurred to develop Polaris, that’s not surprising. But the next-gen is finally here. What do AMD and Nvidia have to offer? Nvidia and AMD have approached the new paradigm from completely different angles. Both strategies, however, are equally sound. With Maxwell over the last two years—and the immensely popular GTX 970 in particular—Nvidia’s secured an overwhelming degree of market share—by Q2 2015, they’d crossed the 80 percent threshold. Together with exclusive value additions like hardware PhysX, and the sheer mindshare Team Green enjoys among the PC gaming community, Nvidia maintains an almost unassailable position as market leader. Moreover, very high profit margins (the original GTX Titan was sold at a 90 percent margin!)  across their product stack means that they bring home a lot more cash than AMD, much of which goes towards R&D.

This is great for them, but the benefits aren’t quite as clear-cut for consumers. With their lopsided share of the pie, Nvidia doesn’t need to push the envelope either in terms of efficiency or bang-for-buck. Ironically, their best play at the moment is to apitalize on the tremendous market and mindshare advantage and bring out a less competitive product which will help them maintain high profit margins despite the expensive move to the 16nm process. With that in mind, the GTX 1080 is a remarkably unsurprising product. The 1080 isn’t Nvidia’s flagship per se. Ever since the GTX 700 series, Nvidia’s released their tier 2 GPU at the outset of the generation at the same circa-$500 dollar price-point as their old flagships, outing their tier-1 product months later with a $200 price premium. The Titan line offers a taste of that performance for what essentially amounts to massive early adopter’s tax.

Sure, it outperforms the 980 Ti by a respectable margin, (though a moderate overclock is enough to close the gap). But the bottom line is that the 980 Ti is a year-old 600mm2 product which Nvidia outed for $649. The Founders’ Edition of the GTX 1080 costs $699.  Even factoring in low yields on the 16nm process, Nvidia could have brought a product to the market that’s 50-75 percent faster than the GTX 1080, while maintaining 980 Ti margins of profit. But considering their dominant position in the market, it’s not something they have to do. The Founder’s Edition concept serves to underline Nvidia’s approach here. There’s nothing particularly special about Founder’s Edition versions of the 1070 and the 1080, apart from their admittedly shiny aluminium coolers, and the fact that they’re available a few weeks ahead of AIB variants. Despite this, Founder’s Edition cards command a substantial premium, one that, in the 1080’s case, makes it more expensive than a 980 Ti.

The GTX 1080 is certainly a technical marvel: It’s the single fastest GPU on the market, and all it needs is a single eight-pin power connector. It’s a semi-viable single-card solution for 4K gaming. If you’re looking for the absolute best you can get right now, the 1080’s the way to go. But at the $699 asking price for the Founder’s Edition, it risks being made redundant in a hurry if (not when) the inevitable GTX 1080 Ti arrives.

However, the price-premium over the 970 makes things a little murky: The cheapest, reference-clocked GTX 970s can actually be had for around $280 on Newegg, $160 less than the Founder’s Edition 1070. The 970’s not to be underestimated, especially if you’re planning on pairing it with a 1080p monitor. If 1080p/60 is the goal, a GTX 970 still makes a lot of sense. If you’re planning on gaming at 1440p or 4K, however, nothing comes close to the GTX 1070 as a single-card value proposition. Much of the GTX 1070’s value comes down to how you’re looking at it: As an upper midrange option, it’s pricey and definitely overkill for 1080p. However, it’s hands-down the best entry point to 4K gaming, apart from SLI/Crossfire configurations (more on that in a bit.)

What’s AMD doing with Polaris, then? In many ways, Team Red’sapproach to the new process node is the (polar) opposite. Sorry for the lame pun. Businesswise, AMD’s been in dire straits for quite a while. After Rory Reed stepped down in late 2014, Lisa Su had her work cut out as CEO: To turn around a company that was overstretched, losing out to competitors across multiple markets, and bleeding hundreds of millions of dollars every year.

While Dr. Su has certainly been trying her best, AMD posted losses in excess of $100 million just in the last quarter. Relatively cash-strapped, AMD’s best bet long-term bet is to try to claw back market share from Nvidia, to ship in volume and accept lower margins. With a market share that’s still below 30 percent as of this quarter, a high margin approach like the one adopted by Nvidia is simply not feasible for them. Instead, with Polaris and the RX 480, AMD’s doubled down on the fundamental benefit of a die shrink: You get more performance for less. Less power consumption, a smaller die size, and crucially, a lower unit cost that translates into a lower sticker price. While the gaming media tends to focus an awful lot on high-end PC gaming—4K, the Radeon Fury X, the 1080 and the like—flagship cards only account for a small fraction of total sales.

It’s in the $200-300 sweet-spot rang, with cards like the 660 Ti and the Radeon 7850, that high volume sales are to be had. While snazzy product position might tell you otherwise, this is where Nvidia and AMD earn their bread and butter in the consumer graphics market. AMD’s Polaris-based RX 480 is a unique value proposition: At its $199 starting price, the RX 480 offers nearly as much performance as a GTX 980 while costing half as much. The RX 480 is essentially the inverse of what Nvidia’s doing with the GTX 1080: rather than trying to maximize performance at the high end, the RX 480 capitalizes on the 14nm process’s space and power efficiency to bring high-end performance at a much lower price-point. In the lead-up to the 480X announcement, AMD talked a lot about expanding their “TAM,” or Total Addressable Market.

What makes the RX 480 unique in this respect is that it means different things to different people: For gamers on a budget (read a lot of people), the RX 480 is totally amazing: For the first time, a compromise-free 1080p/60 experience is within reach under $300. The GTX 970 was a phenomenal value proposition at launch, offering the ability to max out games at 1080p without breaking the bank. With its $199 price, the RX 480 takes this a step further, doubling the performance of a 960 at the same price point. Another point to note is that the GTX 970 is listed as the min spec for both the HTC Vive and Oculus Rift. A key challenge for dedicated VR systems is the price of admission. A typical Core i5/GTX 970 rig can run upwards of $700 which, when added to the cost of a Rift makes for quite an investment. An RX 480 paired with the FX-6350 will cut VR’s cost of admission down drastically and let in people who were put off by the high cost.

Lastly, the RX 480 is a very interesting proposition in Crossfire configurations, and this again has wider market implications. While a single RX 480 can stay toe-to-toe with a GTX 970, preliminary data shows that a pair of 480s in Crossfire perform roughly on par with a GTX 1080. A major roadblock with midrange dual-GPU configurations is that the GPU savings are largely eroded by the need to buy a compatible motherboard and a higher-capacity PSU. Compared to SLI, Crossfire-compatible motherboards are available at lower prices, starting from the $70 Gigabyte B85M-D3H.

Even better, two RX 480s only have a combined TDP of 300W, meaning that a middling 600W power supply ought to be enough to handle them. While AMD has no plans of releasing a high-end single card solution until Vega in 2017, RX 480 Crossfire setups could well be AMD’s 4K dark horse, trading blows with a GTX 1080 for less than the price of a GTX 1070 Founder’s Edition. AMD’s clearly got its work cut out for it—the market remains Nvidia-dominated and the company continues to post losses quarter after quarter, but if the RX 480 is anything to go by, the future might not be as gloomy as it seems for Team Red.

Whether you’re talking Pascal or Polaris, this year’s GPU offerings from both Nvidia and AMD shake up the market in a big way. What do you think about Pascal and Polaris? Let us know!